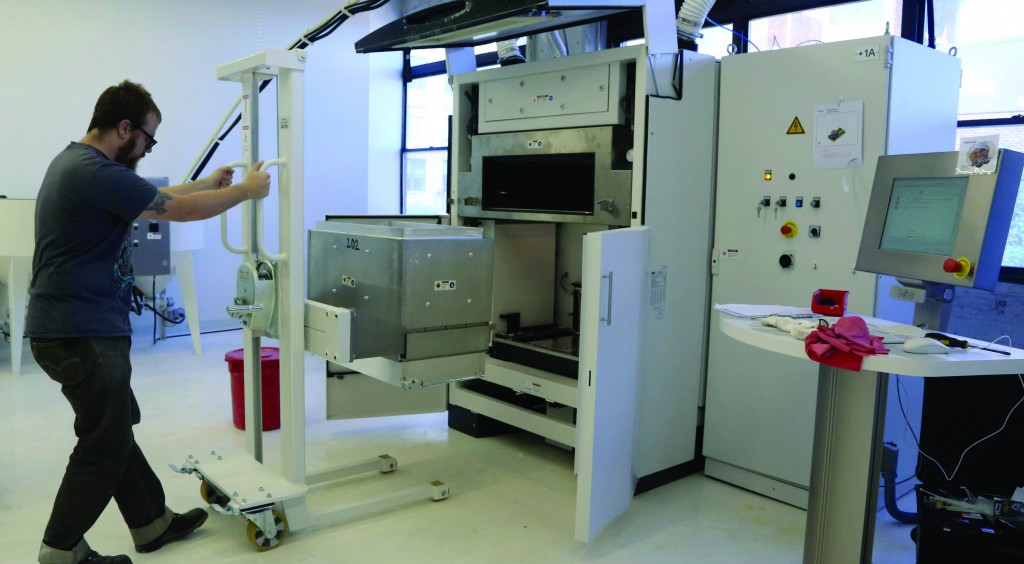 It looks like a bakery. A warm glow emanates from the windows of big, oven-like machines, and a dusting of white powder covers everything.

This space in an anonymous building in Long Island City isn’t cooking up pastries, however. It’s a factory, filled with 3-D printers “baking” items by blasting a fine plastic dust with lasers.

When a production run is done, a cubic foot of white dust comes out of each machine. Packed inside the loose powder are hundreds of unique products, from custom iPhone cases to action figures to egg cups.

New York’s factories used to build battleships, stitch clothing and refine sugar, but those industries have largely departed. But 3-D printing is a different kind of industry, one that doesn’t require large machinery or smokestacks.

“Now technology has caught up, and we’re capable of doing manufacturing locally again,” says Peter Weijmarshausen, CEO of Shapeways, the company that runs the Queens factory.

Weijmarshausen moved the company here from The Netherlands. Another company that makes 3-D printers, MakerBot, just opened a factory in Brooklyn. And in Brooklyn’s Navy Yard, where warships were once built to supply the Arsenal of Democracy, there’s a “New Lab,” which serves as a collaborative workspace for designers, engineers and 3-D printers.

3-D printers have been around for decades, used by industrial engineers to produce prototypes. In the last few years, the technology has broken out of its old niche to reach tinkerers and early technology adopters.

Shapeways’ process is simple. Anyone can upload a 3-D design and submit an order to have it “printed” in plastic at the factory. The company charges based on the amount of material a design uses and then ships the final product to the customer. IPhone cases are popular, but many items are so unique they can only be identified by their designer, such as the replacement dispenser latch for a Panasonic bread maker.

For its part, MakerBot is spearheading another side of the 3-D printing boom by making affordable desktop 3-D printers. About the size of a microwave oven, the printers feed melted plastic out of “print heads” that move in three dimensions, gradually building objects as the plastic cools. Instead of sending a 3-D design to Shapeways, a MakerBot owner can print an object in plastic at home, as long as it’s smaller than a loaf of bread.

One example of the combined power of 3-D printing and direct-to-consumer sales is the Spuni, a new type of spoon for babies. Boston couple Isabel and Trevor Hardy noticed that a baby taking a bite from a regular baby spoon leaves a lot of food on the utensil. So they sketched up a new spoon that “front-loads” the food, leaving less uneaten. Thanks to a 3-D printer, they had a prototype utensil eight days later, ready to test with an actual baby.