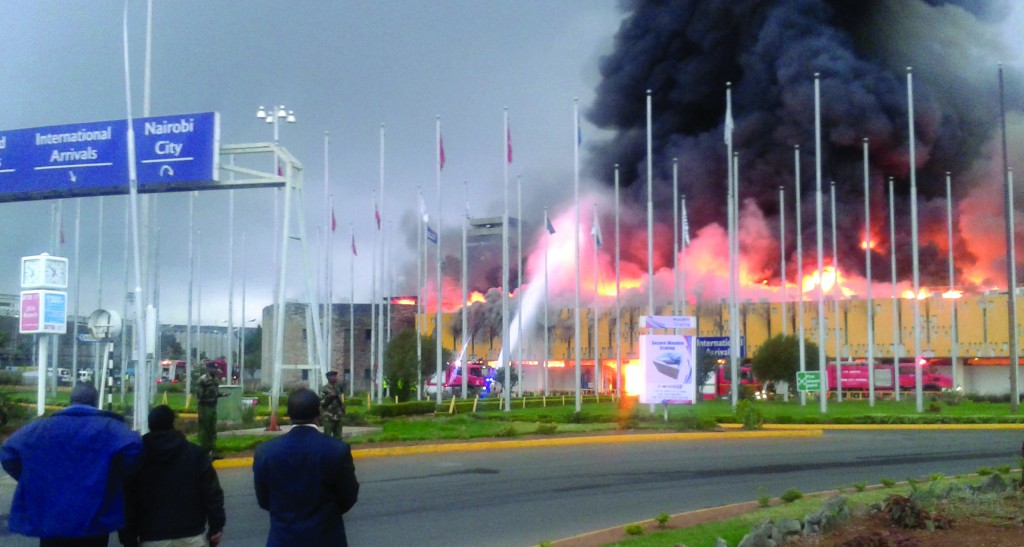 A small fire at Kenya’s main airport swelled into a roaring inferno Wednesday that destroyed part of East Africa’s largest aviation hub and hampered air travel across the continent.

Firefighters were desperately short of equipment in an area where the county government apparently lacks a single working fire engine. Crews needed hours to get the flames under control and at one point resorted to a line of officers passing water buckets.

No serious injuries were reported.

The fire broke out on the 15th anniversary of the bombings by al-Qaida of the U.S. embassies in Nairobi and Dar es Salaam, in neighboring Tanzania. No terror connection to the fire was immediately evident, but the blaze revived long-standing safety concerns about Jomo Kenyatta International Airport.

A statement from Kenya President Uhuru Kenyatta said the cause of the fire was being investigated and that “there is no reason to speculate at this point.”

By the end of the day, the airport re-opened for domestic and cargo flights but remained closed to international flights. Officials planned to convert a domestic-flight area into an international terminal for the time being.

No U.S. carriers fly direct to Nairobi. Delta Air Lines, based in Atlanta, tried to open such a route in 2009, but the Transportation Security Administration rejected the plan because of security concerns.

Nairobi County does not have a single working fire engine, the Daily Nation, a Nairobi newspaper, reported last month. One engine, the paper said, was auctioned in 2009 because the county had not paid a $100 repair bill.

Many of the units that battled Wednesday’s fire were from private security firms and had to fight airport traffic to get there.