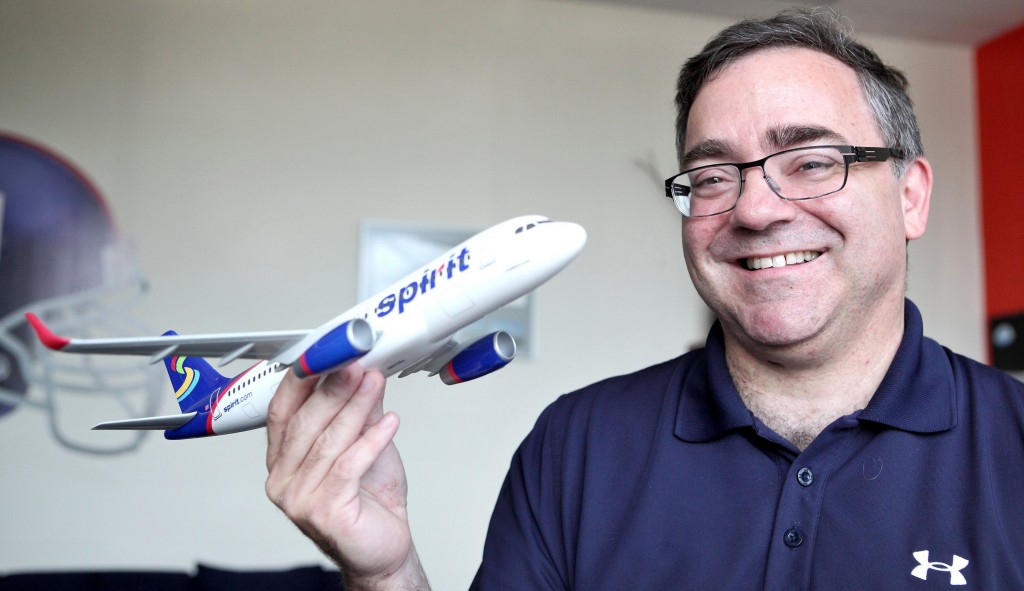 At the headquarters for low-cost Spirit Airlines Inc., the word “cheap” is not an insult. It’s a business philosophy championed by the airline’s chief executive, Ben Baldanza.

He demonstrates his frugal ways by switching on the lights to his office. Only a third of the light tubes are screwed into the fixtures to save on electricity.

Baldanza then pulls a vacuum out of his office closet, which he uses to help save on janitorial costs.

“We don’t over-spend on that kind of stuff,” the 51-year-old executive said with a chuckle. “It’s not part of our culture.”

Meet the top penny pincher at the nation’s cheapest airline.

His tightfisted mind-set runs throughout the airline, right down to cramming in more seats per plane than most other carriers and charging passengers $3 for water and $10 to print out boarding passes. The airline even dumped its toll-free phone number to save a few bucks.

Spirit was the first U.S. airline to introduce a fee for carry-on bags and one of the first to install seats that don’t adjust.

But don’t expect an apology from Baldanza if your airline seat was cramped.

“Don’t buy our low fare and complain that we don’t have legroom,” he said.

Such cost-cutting moves have made Spirit one of the nation’s fastest-growing carriers, and with one of the highest profit margins in the industry. But the tight seats and extensive menu of passenger fees are a big reason, according to critics, that Spirit rated dead last among airlines in customer satisfaction.

“I had no idea that when booking I should have paid for a carry-on bag,” said Chris Ellis, an Occidental College student whose recent Spirit flight from Houston to Los Angeles was delayed for two hours. “Nor did I realize before I got on my flight that I would be expected to pay $3 for water. It was just ridiculous.”

At Spirit headquarters, Baldanza boldly defends the business model, saying one-third to one-half of his customers could not afford to fly without Spirit’s cheap fares.

“As long as they keep fares low, there is room for a Greyhound-type airline in the industry,” said Ray Neidl, a New York-based airline analyst.

The carrier’s business plan has been so successful that it is now poised to spread its unique brand of ultra-cheap service across the country.

In the first half of 2013, the airline reported a more than 20 percent increase in total passenger miles traveled. Spirit now has a fleet of 50 planes, but has put in enough orders for new jets to expand the airline by about 15 percent to 20 percent a year for the next eight years.

Most major carriers target business travelers, who are quick to charge a first-class or business-class seat to their company’s travel account. Spirit, instead, aims for leisure travelers who save all year for a family vacation and don’t care about comfy seats and onboard entertainment systems.

“Our competition is Amazon.com and Best Buy and other places you will spend your discretionary funds,” Baldanza said.

Spirit can keep fares ultra low, the CEO said, by putting a price tag on everything else on the plane, including snacks, drinks, pillows and blankets. Spirit flight attendants even make an on-board pitch to sign passengers up for Spirit MasterCards. Crew members earn bonuses for the food, drinks and other extras they sell on the plane.

“We manage the onboard like it’s a little store,” he said.

The flaw in Spirit’s business plan has been the carrier’s widespread reputation for poor service.

Spirit made its debut this year on the annual airline rating by Consumer Reports, landing at the bottom with the lowest overall satisfaction score of any company ever rated by the magazine.

In May, the U.S. Department of Transportation received 80 complaints against Spirit for customer service and problems with baggage, refunds and reservations. Spirit had the third-highest number of complaints for the month, behind only the much larger United Airlines, with 149 complaints, and American Airlines with 136 complaints.

Online sites are littered with angry posts about flying on Spirit.

Baldanza said he is bothered when flight delays anger passengers, but he doesn’t fret about the gripes over fees.

“When people are complaining about the structure of the business model, to me that is akin to someone walking into Chick-fil-A and screaming, ‘Why don’t you sell hamburgers?’” he said.

And yet, Spirit continues to draw new passengers, intrigued by its low prices.

“For some people, price presumably trumps everything,” said Jan Brueckner, an economics professor at the University of California-Irvine. Still, he added that Spirit must upgrade its services it if wants to attract high-spending business travelers.

Adam Rongo, a musician from New York, recently flew to visit family in Michigan on a Spirit flight that was delayed more than 15 hours. He said he spent an extra $18 for a seat with 6 inches of additional legroom but was moved back to a standard seat when the flight was rescheduled the next day.

Despite the long delay and the hassle of arguing with Spirit workers for his refund, he said he might consider flying Spirit again because his $325-round-trip fare was such a good deal.