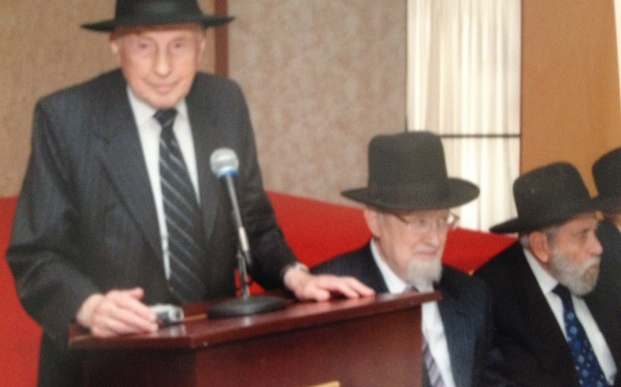 Reb Simcha Zimmel Freundlich, z”l, was born 92 years ago. His parents were Reb Asher Zelig and Rachel. They lived in a small village, 25 miles from Kluzhe, the regional capital of Transylvania, Western Romania.

At a young age, Simcha Zimmel was sent by his father to the chassidishe yeshivah of Harav Yehudah Rosner, zt”l, Av Beis Din and Rosh Yeshivah of Sakelheid. A stellar talmid, he was ultimately placed in charge of teaching the Rosh Yeshivah’s shiur to the younger bachurim.

Learning in Sakelheid left him with a lifelong affinity for Chassidus and Rebbeim. He eventually sponsored the reprinting of Imrei Yehudah, the sefarim of his beloved Rosh Yeshivah.

Simcha Zimmel returned home at 18, but his reunion with his family was short-lived. He was drafted into forced labor for the Hungarian army. Two years later, the Nazis rounded up the Jews, including Simcha Zimmel’s parents, sister and four brothers. Only Simcha Zimmel, away with the army, survived.

He had a strong and resilient personality. In the waning days of the war, he and some comrades ran into the woods, hoping to reach the Russian liberators. Caught by their superiors, they were lined up to be shot.

Reb Simcha Zissel found the strength to confront his captors.

“Why kill innocent people?” he called out. “What purpose will it serve?”

Endless, silent moments ticked by. The Jewish prisoners cautiously turned around, and realized that the soldiers had left.

Reb Simcha Zimmel went back to his hometown. Before the war, he had been introduced to Fay (affectionately known as Bubba) Kahn of Klausenberg, who survived Auschwitz. She and Simcha Zimmel married and began a new life together in Hungary. As the Iron Curtain descended, they escaped clandestinely with their firstborn infant son. Baruch Hashem, they reached Paris, and eventually the United States.

Mr. Freundlich’s first job was selling eggs off the back of a battered old station wagon; then he opened a dry goods store. He later established a children’s clothing manufacturing and wholesale firm. The business grew to include several hundred employees.

The Freundlichs’ younger son, Heshy, spoke about how much he had learned from “the honesty and integrity with which my father dealt with his customers and employees. He treated every person with dignity and respect. I can only hope to emulate him.”

Mr. Freundlich’s life was dedicated to Torah, avodah and gemilus chassadim. An avid Daf Yomi participant, he was zocheh to complete Shas three times. To share and hear divrei Torah was his greatest pleasure. Many distinguished talmidei chachamim came to his home in Flatbush on behalf of their mosdos. They would tell him divrei Torah, and he would give them a check for their institution. Reb Simcha Zimmel emphasized that it was he who had received the far greater gift.

He attended shul three times daily, and was always one of the first to arrive. Even late in life, when he needed to be taken in a wheelchair to daven, that didn’t change.

He gave tzedakah generously and wholeheartedly. A non-Jewish neighbor used to watch the streams of people entering the house. When the Freundlichs returned from a winter stay in Florida, the neighbor told him, “Mr. Freundlich, you have no idea how much money you saved by going to Florida.” Reb Simcha Zimmel saw it differently; he was pained at having missed opportunities to give.

He was a major donor to Laniado Hospital, a wing of which is named for his family; Kollel Shomrei Hachomos of Rabbi Meir Baal Haness; and countless other beneficiaries. He also served on the Board of Agudath Israel of America.

His community standing didn’t interfere with his making the rounds with
a Kollel Shomrei Hachomos pushke in shul. When so frail that he needed his grandson to lift him from his wheelchair for Shemoneh Esreh (insisting on standing for the tefillah), he gave the pushke to his grandson to collect in his place.

At every family simchah, Reb Simcha Zimmel would say, “Hodu l’Hashem ki tov, ki l’olam chasdo.” He saw the nachas of his growing family as Divine revenge against the Nazis, and comfort for those he had lost.

Despite the horrors he experienced, his emunah was staunch and unwavering, his ahavas haTorah and simchah constant. To see him learning with a grandchild or great-grandchild was to see profound happiness. To watch him at the head of the Seder table, intensely reciting, “asher bachar banu mikol am,” was to witness the aristocracy of a ben melech.

His son Asher said, “Whoever met my father quickly recognized the qualities he possessed. He had a pleasing, low-key manner, yet was a formidable presence with a zest for life. He had a loving, compassionate and particularly humble personality.”

He could have afforded a more affluent lifestyle, but was careful not to live differently from his friends and neighbors.

He was married for 67 years to his wife Faiga, tbl”c, and their dedication and commitment to each other were legendary. A son commented at the levayah, “One area where he knew no limits was his devotion to our mother and to do anything to please her.”

After Reb Simcha Zimmel became established in his parnassah, he commissioned the writing of a sefer Torah, to honor the memory of his and his wife’s parents, Hy”d. For many years, that Torah was used in the Muzhayer Beis Medrash, where he was a longtime mispallel. Later, it was sent to Congregation Beth Jacob of Atlanta, where his grandson serves as associate Rav. How fitting, for to his descendants, Mr. Freundlich served as a bridge to a world that was — inspiring their Yiddishkeit, their hashkafos and middos tovos.

Reb Simcha Zimmel Freundlich, niftar on 28 Menachem Av, is mourned by all who knew, loved and respected him, his sterling character, and his abundant maasim tovim.

He is survived by his wife, Fay; his son Asher, married to Zina (née Streifler), living in Highland Park, New Jersey; his son Zvi Hersh, married to Susan (née Mann), of Lawrence, Long Island; grandchildren and great-grandchildren, who follow in the path of their ancestors.