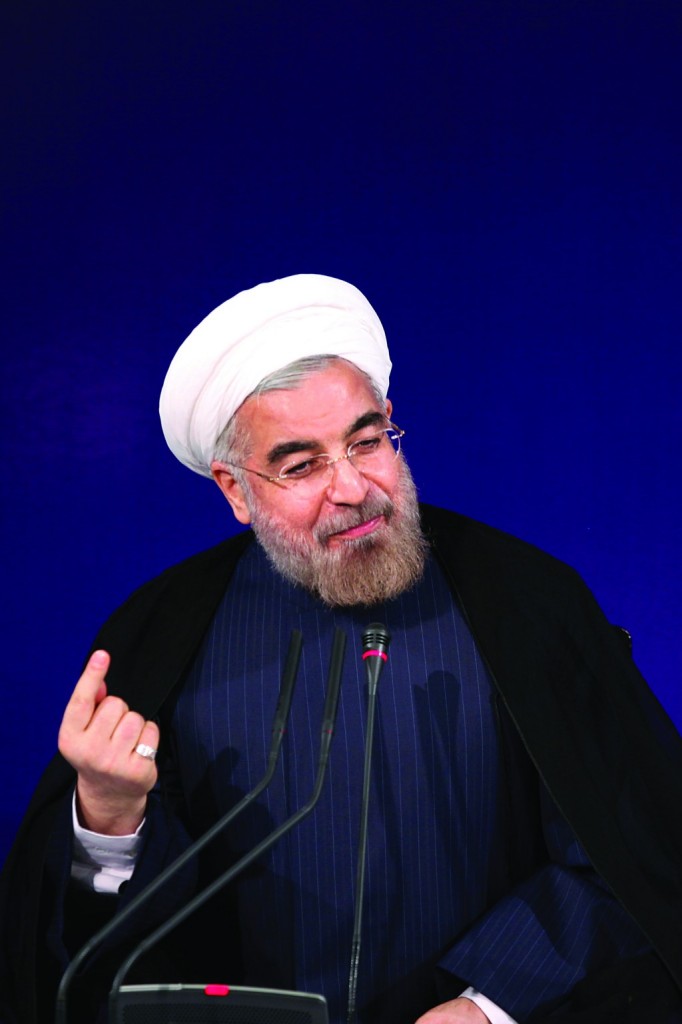 Iran’s incoming President Hassan Rouhani on Tuesday offered an olive branch to the United States in talks on Tehran’s disputed nuclear program, raising hopes of progress after years of stalemate.

Rouhani, seen in the West as a relatively moderate leader, told his first news conference since taking the oath on Sunday that he was “seriously determined” to resolve the dispute and was ready to enter “serious and substantive” negotiations.

Hopes for a diplomatic resolution to the nuclear issue have risen with Rouhani’s victory over conservative rivals in June, when voters chose him to replace hardliner Mahmoud Ahmadinejad with a cleric whose watchword is “moderation.”

Western countries and Israel have said in the past that they believed Iran was trying to achieve nuclear weapons capability, but Tehran says its program is purely for peaceful needs.

Rouhani said Iran would not abandon its nuclear program, which it would uphold “on the basis of international law.”

“We will not do away with the right of the nation,” the 64-year-old said.

“However, we are for negotiations and interaction. We are prepared, seriously and without wasting time, to enter negotiations which are serious and substantive with the other side.”

“If the other party is also prepared like we are, then I am confident that the concerns of both sides will be removed through negotiations within a period which will not be very long.”

His words were likely to reinforce a sense of cautious optimism in the West, despite the fact that negotiations over Iran’s nuclear program have long frustrated both sides.

The last high-level talks between Iran and world powers – the United States, Russia, China, Britain, France and Germany – were held in April and failed to break the deadlock.

Since Rouhani’s victory at the polls, the United States has said it would be a “willing partner” if Iran was serious about finding a peaceful solution to the issue.

Rouhani’s inauguration “presents an opportunity for Iran to act quickly to resolve the international community’s deep concerns over their nuclear program,” she said.

But Psaki added, “there are steps they need to take to meet their international obligations and find a peaceful solution to this issue, and the ball is in their court.”

Rouhani, a former nuclear negotiator, dodged a question on whether he would like to meet President Barack Obama during a visit to the United Nations in New York.

“If we see there is no covert secret agenda and there are good intentions, who will be meeting and who will be negotiating, these will be sideline issues,” Rouhani said with a wry smile.

Hoping to seize on Rouhani’s appointment, Russia on Tuesday said fresh talks between Iran and world powers must not be delayed and should take place by mid-September. Rouhani has yet to name his nuclear negotiator.

Rouhani warned against what he called the “carrot and stick” approach of the United States of offering talks and at the same time ratcheting up sanctions, which have had a deepening impact on Iran’s economy over the last 18 months.

The measures have already cut Iran’s oil exports by more than half compared to pre-sanctions levels of about 2.2 million barrels per day, helping to devalue Iran’s currency and contributing to a steep rise in inflation.

“It is said (that) through sanctions they check Iran’s nuclear activities. This is totally unfounded, and they themselves are cognizant of this fact … It has nothing to do with the nuclear issue. It is pressuring people.”

But Israeli Prime Minister Benjamin Netanyahu said the pressure on Iran had, in fact, been effective.

“Iran’s president said that pressure won’t work. Not true! The only thing that has worked in the last two decades is pressure,” he said in a statement.

“And the only thing that will work now is increased pressure. I have said that before and I’ll say it again, because that’s important to understand. You relent on the pressure, they will go all the way. You should sustain the pressure”.

The United States and Israel have said all options, including military action, are open to stop Tehran from acquiring nuclear arms.