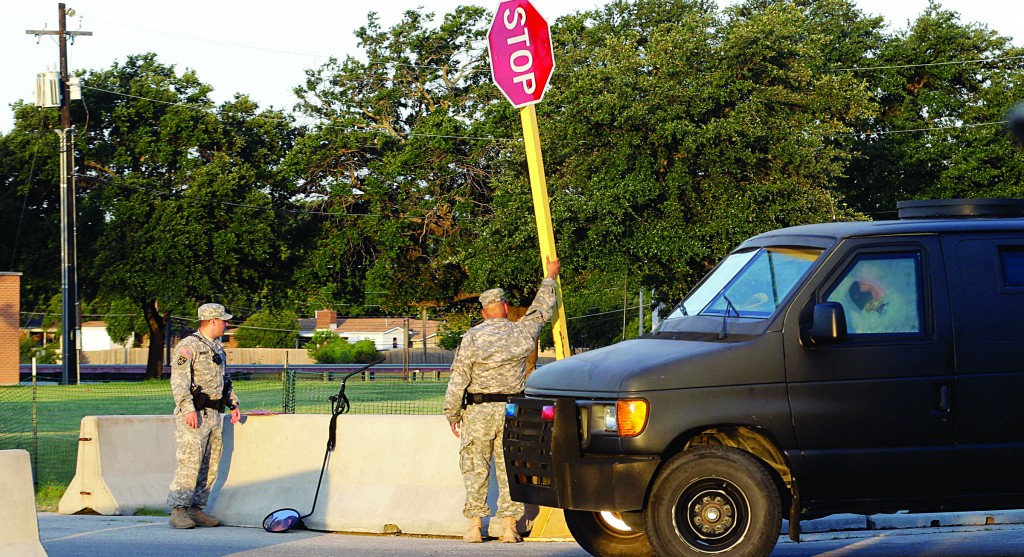 Maj. Nidal Malik Hasan fired the last of 146 bullets in his assault on Fort Hood, then walked outside where he met two civilians who asked about the commotion and the laser-sighted pistol in his hand.

Hasan told one person not to worry. He assured the other it was just a training exercise and the gunshot wound only paint. He let both live.

Hasan, who admits to killing 13 people and wounding 32 others in the 2009 attack, matter-of-factly told a jury of 13 officers that he was the gunman.

“The evidence will clearly show that I am the shooter,” he said, calmly delivering an opening statement that lasted little more than a minute. His only utterance of regret was toward his religion for being among the “imperfect Muslims trying to establish the perfect religion.”

“I apologize for any mistakes I made in this endeavor,” said Hasan, an American-born 42-year-old who was paralyzed after being shot by officers responding to the attack.

Hasan planned the assault for months, prosecutor Col. Steve Henricks said, describing how Hasan stockpiled bullets, practiced at a shooting range and bought an extender kit so his pistol could hold more bullets.

If convicted, Hasan faces the death penalty. No American soldier has been executed since 1961, and military prosecutors showed right from their opening statements that they will take no chance of fumbling details that could jeopardize any conviction down the line.

They described a calculating Hasan, armed with two handguns and carrying paper towels in his pants pockets to conceal the sounds of rattling ammunition as he walked through a deployment-readiness center on the sprawling base.

“He came to believe he had a jihad duty to murder his fellow soldiers,” Henricks said, adding that Hasan researched Taliban leaders’ call to wage holy war.

The government has also said Hasan sent more than a dozen emails starting in December 2008 to Anwar al-Awlaki, a radical U.S.-born Islamic cleric killed by a drone strike in Yemen in 2011.

The shooting happened about three weeks after Hasan learned he would be deploying to Afghanistan. Upon getting the orders that he was going overseas, Hasan told a base doctor, “They’ve got another think coming if they think they are going to deploy me,” Henricks said.

On the day of the attack, Hasan sat among his fellow soldiers who were preparing to go overseas. He tried to clear the area of civilians, even walking over to a civilian data clerk to tell her she was needed elsewhere in the building because a supervisor was looking for her. The prosecutor said the clerk thought that was odd but went anyway.

“He then yelled ‘Allahu akbar!’ and opened fire on unarmed, unsuspecting and defenseless soldiers,” Henricks told the jury.

During Tuesday’s proceedings, Hasan mostly looked down or straight ahead, occasionally leafing through paperwork with his right hand while seated at the defense table.

Acting as his own attorney, he politely addressed witnesses from his wheelchair, wearing green Army fatigues and a gray, bushy beard. He asked few, if any, questions as prosecutors elicited testimony recounting his firearm purchases at a store called Guns Galore in nearby Killeen.

But Hasan didn’t pass on a chance to cross-examine his former supervisor, who had given Hasan high marks on an evaluation the very week of what Hasan would only call “the incident.”

Mumbling and stumbling over his questions — at one point mispronouncing his own name — Hasan asked retired Lt. Col. Ben Phillips a series of questions about “medical personnel initiating mercy killings.” He also appeared to ask about a water supply in Iraq being contaminated with gas.

In writings and in previous court statements, he sought to argue that he carried out the shooting to defend the Taliban from American attacks. But the judge denied that request.

The trial is playing out amid high security at Fort Hood, where armed guards stood in doorways and 15-foot stacks of shock-absorbing barriers obscured the view of the courthouse. Jurors were told to prepare for a trial that could take months. Hasan needs regular breaks because of his paralysis.

Numerous requests have delayed the trial for years, including a fight over Hasan’s beard, which violates military regulations.

Hasan dismissed his attorneys earlier this year, and his opening statement mirrored his demeanor during jury selection last month, when he did not speak often and asked only a few questions about religion.

Over the next several weeks, Hasan is expected to question witnesses, many of whom will be among the more than 30 people who were wounded, plus dozens of others who were inside the post’s Soldier Readiness Processing Center at the time of the attack.