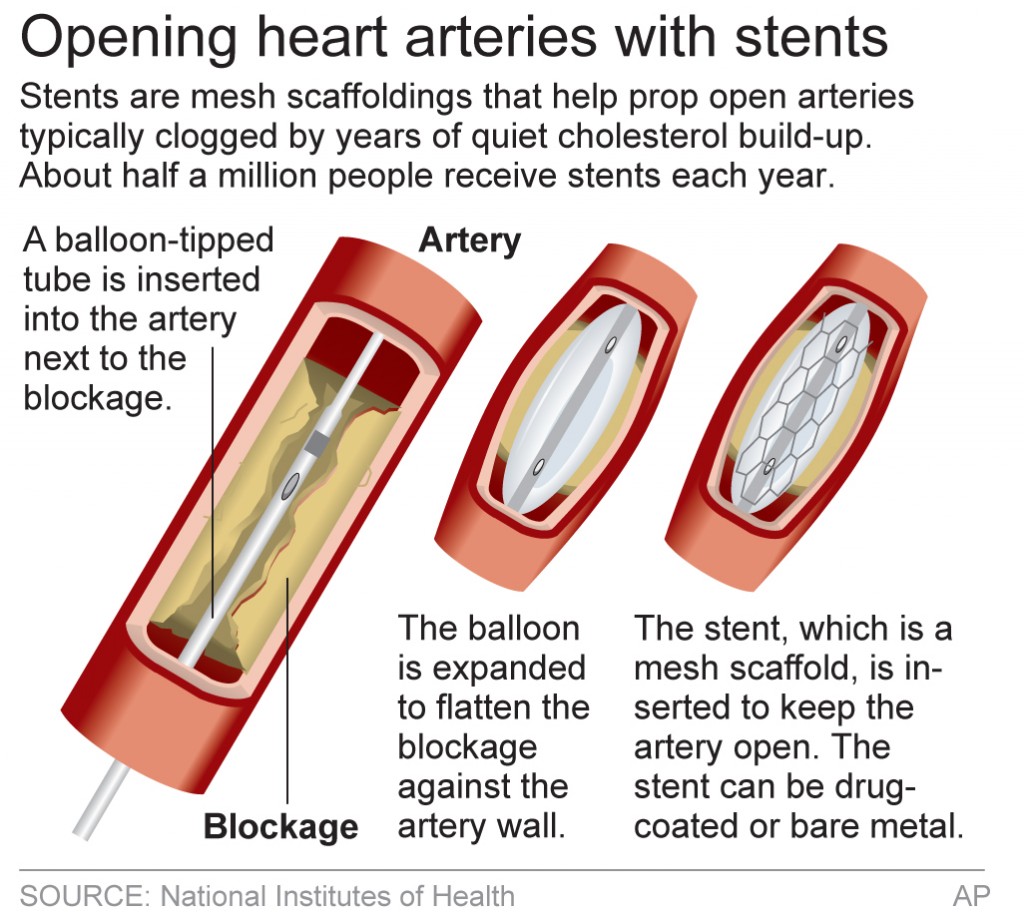 “At the recommendation of his doctors, President Bush agreed to have a stent placed to open the blockage,” Ford said. “The procedure was performed successfully this morning, without complication, at Texas Health Presbyterian Hospital.”

Bush, 67, was expected to be discharged Wednesday and resume his normal schedule the following day.

The blockage was discovered Monday during Bush’s physical at the Cooper Clinic in Dallas, where the nation’s 43rd president lives.

Bush was described as being “in high spirits” and eager to return home.

“He is grateful to the skilled medical professionals who have cared for him,” Ford said. “He thanks his family, friends, and fellow citizens for their prayers and well wishes. And he encourages us all to get our regular check-ups.”

Stents are mesh scaffoldings that prop open arteries typically clogged by years of quiet cholesterol buildup. About half a million people in the U.S. have stents inserted each year, generally involving an overnight stay in the hospital.

Doctors usually guide a narrow tube through a blood vessel near the groin up to the heart, inflate a tiny balloon to flatten the blockage and insert the stent. Sometimes, they insert it through an artery in the wrist to lower the risk of bleeding.

Bush is known as a fitness buff. In 1993, before he was elected Texas governor, he ran the Houston Marathon in a respectable 3:44.52.

While in the White House, he frequently used a quarter-mile jogging path on the south lawn. Bush was known to run about three miles four days a week, and cross-trained with swimming, free weights and an elliptical trainer. When doctors found his knees were getting damaged, he turned to mountain biking.

Since leaving office, Bush hosts and leads an annual 100-kilometer mountain bike ride with about 20 wounded military veterans. This year’s ride was near Waco and his Central Texas ranch. He’s also led a group of vets on bikes through Texas’ rugged Big Bend National Park.

But while Bush doesn’t have a history of heart trouble, he has needed medical attention several times.

In May 2004, toward the end of his first term, Bush fell from his mountain bike during a 17-mile ride. He was wearing a helmet and mouthguard but sustained scrapes and scratches to his face, hand and knees. In July 2005, he crashed his bike again while on a slick pavement in Scotland and suffered some bruises and scrapes to a hand and arm.

In 2002, he briefly lost consciousness while watching a football game at the White House and hit his head. The incident was blamed on him not feeling well and an improperly eaten pretzel.