General Stocks Slip on a Quiet Day on Wall Street 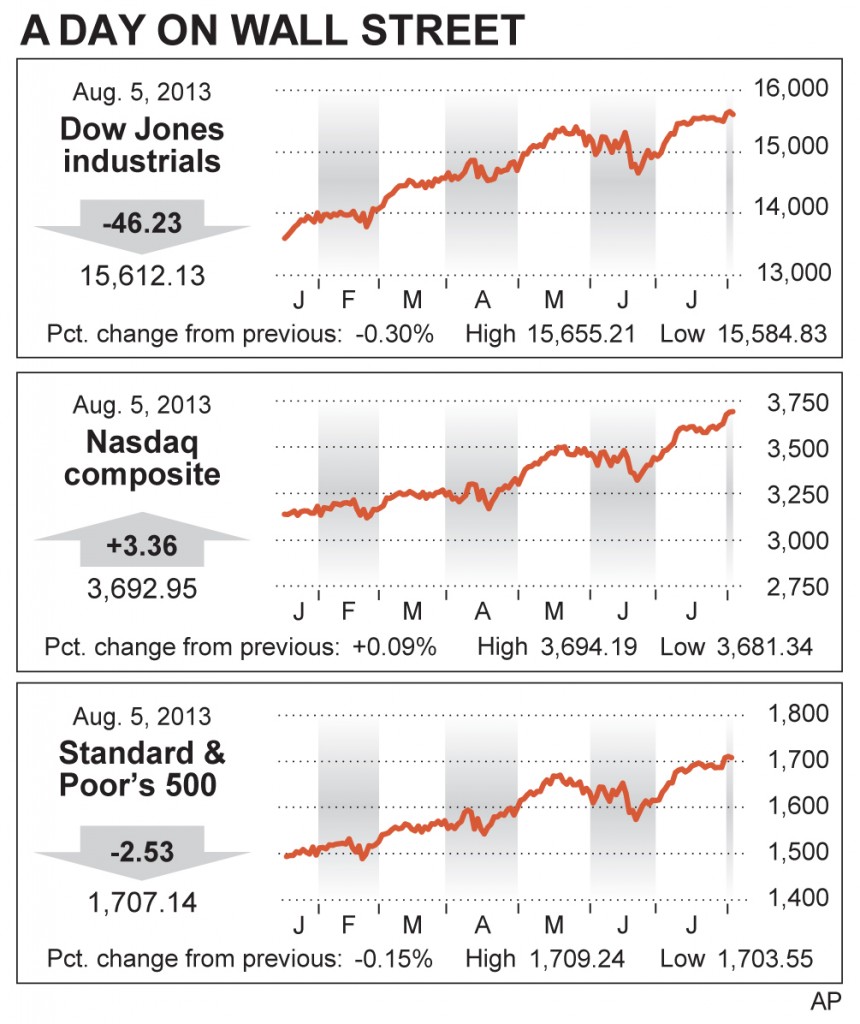 There was little in the way of news to shake the market out of a summertime stupor, other than a report from the Institute for Supply Management that the U.S. service sector expanded in July, helped by a rise in new orders.

It was the latest piece of data that economists and investors puzzled through as they try to judge how well the U.S. economy is doing.

Last Thursday, the ISM reported that manufacturing increased last month. The next day, the government reported that companies weren’t hiring as many workers as economists had predicted.

The report out Monday wasn’t enough to drive the market above its already high levels.

“I think it’s flat for a reason,” said Terry Sandven, chief equity strategist at U.S. Bank’s wealth management group. “With broad indexes near all-time highs, we’re due for a pause.”

The Standard & Poor’s 500 index breached 1,700 points for the first time last week. An improving U.S. economy and rising corporate profits have helped push the index up 19.7 percent this year.

The S&P 500 index slipped 2.53 points, or 0.2 percent, to close at 1,707.14 on Monday. Utilities led eight of the 10 industry groups in the index lower. Technology and consumer-staples companies eked out gains.

Apple, the biggest company in the Nasdaq, rose after news that President Barack Obama’s administration prevented a ban on imports of some iPhones and iPads. Apple gained $6.91, or 1 percent, to $469.45.

In June, the U.S. International Trade Commission ruled that the Apple devices violated a patent held by Samsung and issued the ban. The Obama administration had 60 days to decide whether to let it take effect.

Among other companies in the news, Berkshire Hathaway crept higher on the first day of trading after its earnings report. Warren Buffett’s conglomerate posted a 46 percent rise in profit late Friday, easily beating Wall Street’s estimates. Berkshire reported big paper gains on the value of its derivative contracts and higher earnings from its BNSF railroad. Its stock edged up 41 cents, or 0.4 percent, to $118.23.

Big companies have been reporting better second-quarter results. Analysts estimate that earnings for companies in the S&P 500 increased 4.4 percent over the same period a year earlier.

In the market for U.S. government bonds, the yield on the 10-year Treasury climbed to 2.64 percent from 2.60 percent in late Friday trading.

Trading volume was well below average. Just 2.5 billion shares were traded on the New York Stock Exchange, versus a recent average of 3.4 billion.