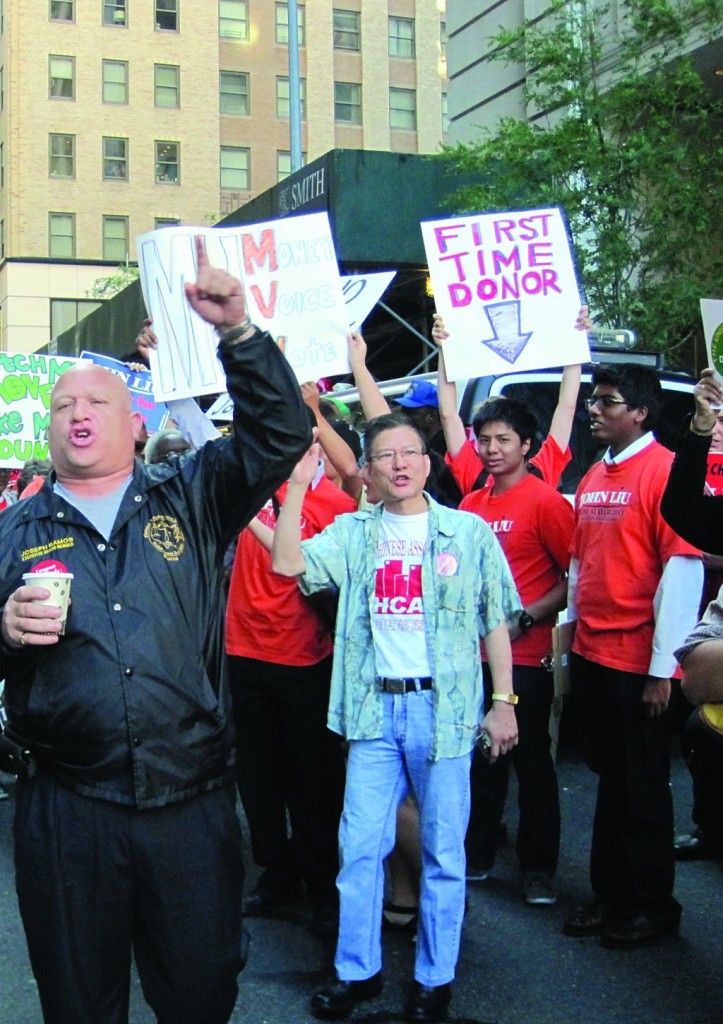 Christine Quinn received more than a third of all public funds set aside for the mayoral race at a Campaign Finance Board meeting on Monday, giving her already well-financed bid nearly unlimited resources to define herself favorably in the five weeks until the Democratic primary.

But the biggest news that emerged from the long awaited first installment of the six-for-one dollar in public matching grants was the denial of funds for Comptroller John Liu, dealing a severe financial blow to the Democrat’s campaign to become New York City’s first Asian-American mayor.

“The evidence suggests that the potential violations are serious and pervasive across [Liu] campaign’s fundraising,” the board said in a statement read at the hearing. “The choice to withhold payment in this instance is based on the campaign’s inability to demonstrate it is in compliance with the law.”

All those who received funds are Democrats, with the exception of Lhota, the city’s former transit chief and Giuliani administration deputy mayor, who is a Republican. His main rival, billionaire John Catsimatidis, is not participating in the public matching system, choosing to self-fund his campaign.

But thanks to Catsimatidis’s outlay, Lhota’s primary spending limit will jump from about $6.42 million to $9.63 million.

Erick Salagado, a Hispanic pastor from the Bronx who has got some Jewish support for his conservative bid, was not approved for matching funds. Neither was former Councilman Sal Albanese.

But Liu, considered one of five Democrats with a realistic chance due to his position, has the most to lose from the funding loss. At a hastily called press conference Monday afternoon, Liu said his campaign has complied with all requirements. He said the ruling was a “body blow” but would not be a knockout punch to his bid.

“There’s no question that this weakens my campaign,” Liu said. “I utterly dispute and repudiate those kinds of comments.”

Liu has had to contend with the recent convictions of a former campaign worker and a former fundraiser on charges of scheming to circumvent donation limits. The candidate was never charged with any wrongdoing, but the case racked up enormous legal fees for his campaign. His team also believes the scandal has made other donors and political organizations wary of supporting him.

Liu’s lawyer, Martin Connor, said that an appeal is planned, but the process could take a month. Even if the campaign is victorious, it would not have access to the matching funds until just days before the Sept. 10 primary, when it would likely be too late to use.

Liu had raised $3.4 million, less than most of his major Democratic rivals. But because he has the greatest number of small contributions, he was eligible to receive the most in matching funds, approximately $3.5 million. Candidates in the program agree to a spending cap in return for a program that gives candidates $6 for every $1 of donations up to $175 from city residents.

Liu currently has $1.5 million to spend, but can keep raising money.

Liu is currently placing fifth in most Democratic primary polls, trailing Quinn, de Blasio, Thompson and Weiner. The other candidates, who were all awarded matching funds on Monday, have steadfastly declined to comment on Liu’s controversy.

About 150 chanting demonstrators, many pro-Liu, clogged the street outside the campaign finance headquarters before the hearing. Many held Liu campaign signs and wore orange Liu shirts.

“I think they are going after John Liu because he is a threat to the establishment,” said Maureen Pyne, a 74-year-old retired teacher who lives in Manhattan.

The Board altogether approved $23.3 million to 75 qualifying candidates, including those running for comptroller and public advocate.

Scott Stringer, who is running for comptroller, saw his spending ceiling rise from about $4 million to $6 million since his Democratic opponent, former Gov. Eliot Spitzer, has spent so much in his self-funded campaign.

Of the candidates for Public Advocate, Daniel Squadron qualified for the most, $1.48 million. Reshma Saujani came in second with $907,446, and Letitia James came in third with $777,879.