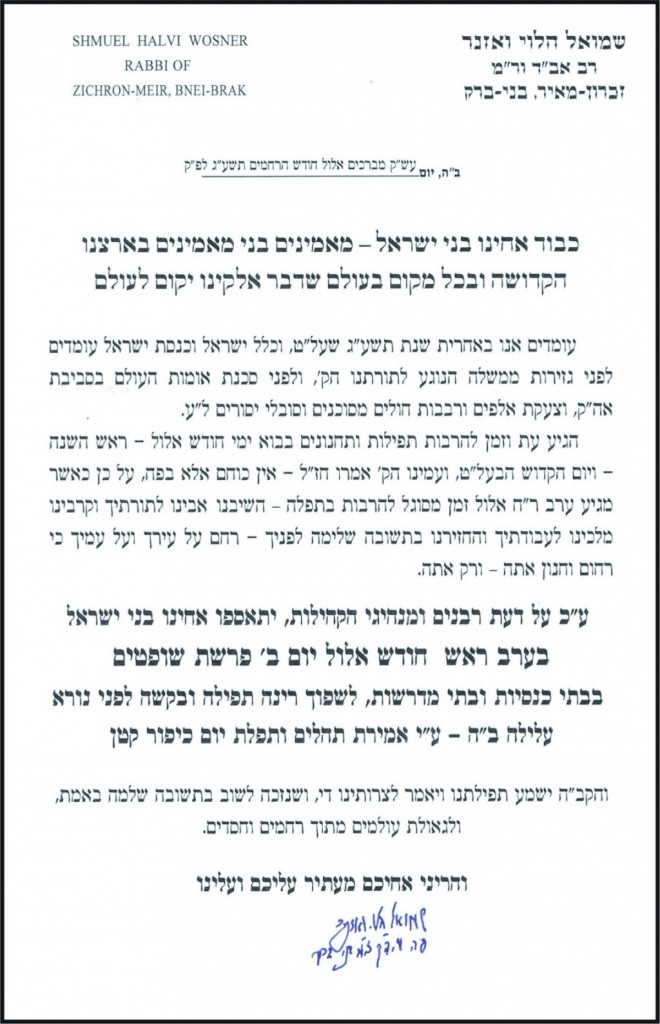 Hagaon Harav Shmuel Halevi Wosner, shlita, has called for a worldwide yom tefillah on Monday, Erev Rosh Chodesh Elul, in light of the grave threat to the Torah community in Eretz Yisrael, the enemies who surround the Jewish people in Eretz Yisrael, and on behalf of the thousands of seriously ill patients in our community.

Harav Wosner’s letter appealed to believing Jews all over the world, maaminim bnei maaminim, for the sake of establishing Hashem’s Name.

“Now is the time to increase tefillah, as the days of Elul approach, Rosh Hashanah and the Holy Day … as our only strength is with the mouth.

“May Hakadosh Baruch Hu hear our supplications and say to our sufferings, ‘Enough,’ and that we should truly repent and merit the geulah sheleimah.”

In the United States, the Rebbes of Vizhnitz and Rachmastrivka, shlita, have joined the call of Harav Wosner.

As per the minhag in Vizhnitz, the entire sefer Tehillim is recited on Erev Rosh Chodesh Elul, and the Vizhnitzer Rebbe said it would be fitting to daven at that time for a yeshuah in regard to the military draft decree that threatens the yeshivos.

As is the custom in numerous other communities, the Rachmastrivka kehillah recites the tefillah of Yom Kippur Kattan on this day. The Rachmastrivka Rebbe said that mispallelim who have this custom should keep in mind the plight of the bnei yeshivos in Eretz Yisrael.