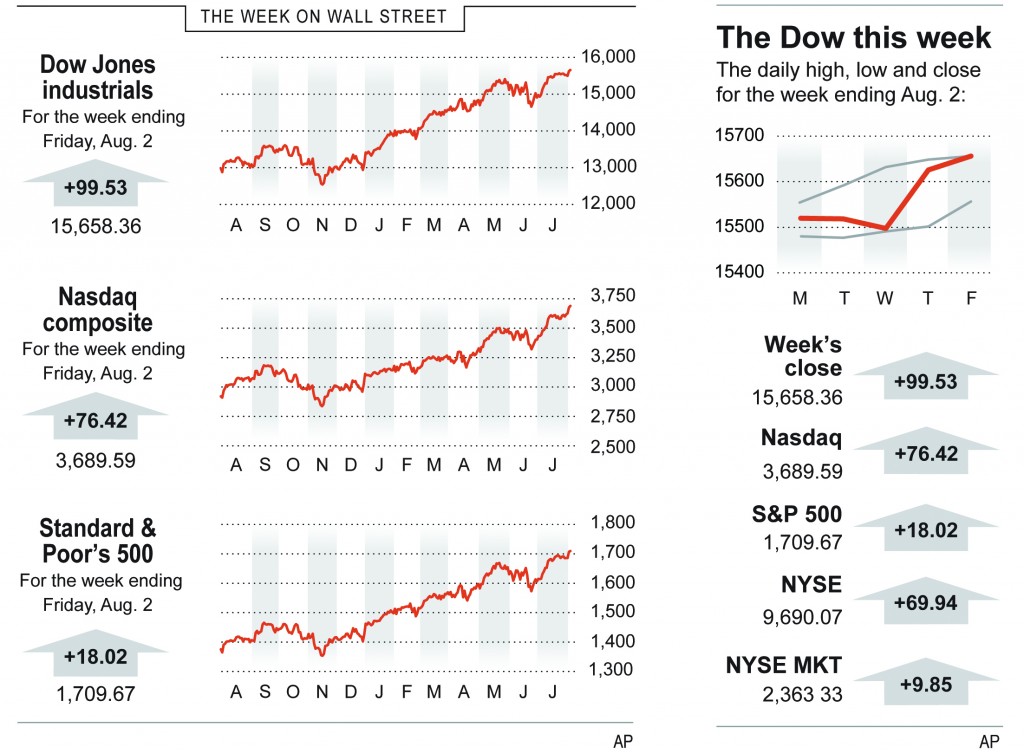 The Standard & Poor’s 500 index ended the week 1 percent higher after breaking through 1,700 points for the first time Thursday. The index has risen for five of the last six weeks. The Dow Jones industrial average rose 0.6 percent and is on a streak of six weekly gains.

On Friday, indexes dropped in early trading after the U.S. added fewer jobs than forecast in July, curbing optimism that the economy is poised to pick up strength in the second half of the year. The market gradually recovered during the day and major indexes ended slightly higher. The gains were enough to set all-time highs for the Dow and S&P.

The government reported that 162,000 jobs were created last month, pushing the unemployment rate down to a 4½-year low of 7.4 percent. The number of jobs added was the lowest since March and below the 183,000 economists polled by FactSet were expecting.

Seven of the 10 industry sectors that make up the S&P 500 gained, led by consumer discretionary stocks. Of the three groups that fell, energy stocks dropped the most.

Chevron fell after it became the latest big energy company to disappoint investors with lower earnings. Chevron’s profit fell 26 percent to $5.4 billion due to lower oil prices and maintenance work at refineries. The stock fell $1.49, or 1.2 percent, to $124.95.

LinkedIn surged $23.58, or 10.6 percent, to $235.50 after the professional networking company’s results topped analysts’ estimates. LinkedIn had its biggest quarterly membership gain since going public in May 2011.

The technology-heavy index got a boost from PC maker Dell, which gained 72 cents, or 5.6 percent, to $13.68 after a special committee of the company’s board agreed to an increased offer from founder Michael Dell. The deal would add a special dividend for shareholders.

Government bonds rose after the weak employment report. The yield on the 10-year Treasury note, which falls when the note’s price increases, fell to 2.60 percent from 2.71 percent Thursday. Bonds were regaining some lost ground after a sell-off Thursday prompted by a string of promising economic reports.

Investors will have to live with increasing volatility in the bond market in coming months as the Federal Reserve eventually begins to wind down its stimulus program, said Ron Florance, managing director of investment strategy for Wells Fargo Private Bank.

The yield on the 10-year Treasury note is 1 percentage point higher than it was May 3, when it hit a low for the year of 1.63 percent.