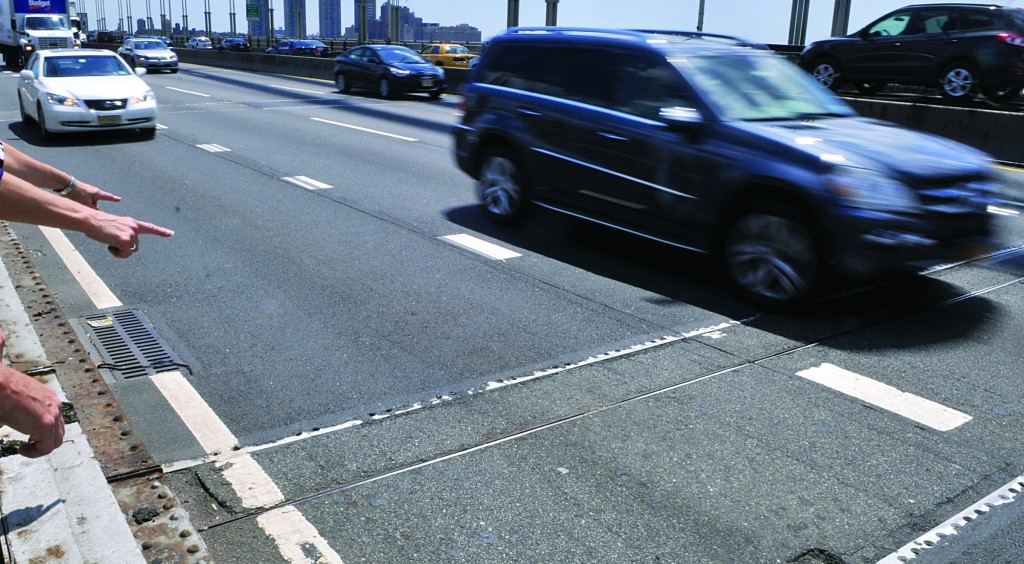 A year after California had its “Carmageddon,” complete with sequel, New York could be staring at its own potential transportation disaster as the venerable 82-year-old George Washington Bridge begins showing its age.

Starting late Monday night, three of four lanes on the heavily traveled upper deck of the GWB will be closed to replace sections of the steel beams that support the roadway, officials at the Port Authority of New York and New Jersey announced Friday.

“The goal is to keep the delays to no more than 60 minutes,” PA spokesman Steve Coleman said. “The other option was to close the bridge for a really long time.”

With an estimated 100 million vehicles crossing the GWB each year, that was not feasible.

With just one lane open in the direction being worked on during any given week, Coleman said, “we are strongly advising drivers to use the lower level or use other crossings.”

The work is expected to last through the end of the year and will be performed during overnight hours — not that this will be any comfort to the estimated 20,000 vehicles that cross the span during those hours on weeknights, or the 50,000 that cross on weekend nights.

The bridge has two levels. Trucks are restricted to the upper level, which has four lanes in each direction. The lower level has three lanes in each direction and is not part of the current repair project. Crews will cut, remove and replace more than 600 deck panels consisting of steel topped with asphalt, using two large cranes.

Delays of 45 to 60 minutes are expected, but that could be an optimistic assessment. A test run two weeks ago produced 90-minute delays, albeit with no public notification, said Port Authority tunnels, bridges and terminals director Cedrick Fulton.

“There are going to be delays, no question about it,” Fulton said. “We’re trying to communicate with the public and urge them to change their driving habits. We’re trying to push as many cars as possible [to the lower level].”

About 300,000 vehicles per day cross the span, which carries Interstate 95 from northern New Jersey across upper Manhattan and northeast into Connecticut. The upper deck opened in 1931, and the lower deck was added in 1962.

About 7 percent of those vehicles travel in the overnight hours during the week and would be affected by the lane closures. That number rises to 17 percent on weekend nights.

The $82-million repair will replace the steel beams underlying the upper deck roadway, which were last replaced in the late 1970s. They were designed to have a 20-year life span, but tests every two years showed they had maintained their integrity, Fulton said.

But in recent years, small cracks had begun to crop up with greater frequency, leading to more repairs. The bridge was never in danger from the cracks, said Andrea Giorgi Bocker, construction engineer for the bridge.

The repairs are being funded by phased-in toll increases implemented in 2011 that will ultimately raise cash tolls from $8 to $15.

Two years ago, a weekend-long closure of a portion of Interstate 405 in Los Angeles was dubbed “Carmageddon” but didn’t produce anything resembling the epic traffic jams that many feared. Another weekend closure last fall didn’t produce “Carmageddon II” as many motorists stayed off the road.

Work is to begin Monday at 11 p.m. in the westbound lanes and will shift to the eastbound lanes the following Monday. The Port Authority plans to extend the hours gradually until the closures last from 10 p.m. to 5 a.m. on weeknights and 11 p.m. to 9 a.m. on weekends.