Regional $1 Fee for New MetroCard Adds Up for City
Regional 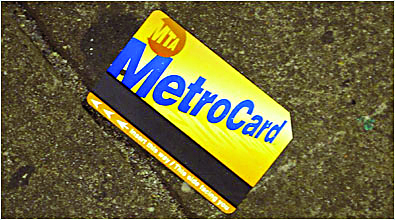 In the five months since New York City’s transit authority instituted a “green” fee for purchasing a new MetroCard, the one-dollar payments have added up to a hefty $11 million for the financially strapped agency.

With an estimated $24 million raised by the end of the year, the Daily News reported, the Metropolitan Transportation Authority will more than offset the $11 million in lost profit from riders who used to throw away their old cards while there was still money left on them.

Adam Lisberg, spokesman for the MTA, told the News that they sold 101 million MetroCards last year, about 10 percent fewer than before the law, whose goal was to encourage riders to recycle their cards when they expire or run out of value.

The MTA said it expects to print 60 million fewer MetroCards next year. The amount of plastic that will save would stretch 3,196 miles, the distance from New York City to Los Angeles.

The small add-on charge apparently worked. Although in the month before it went into effect only 61 percent of riders re-used their cards, by May and June that percentage was approximately 87 percent.