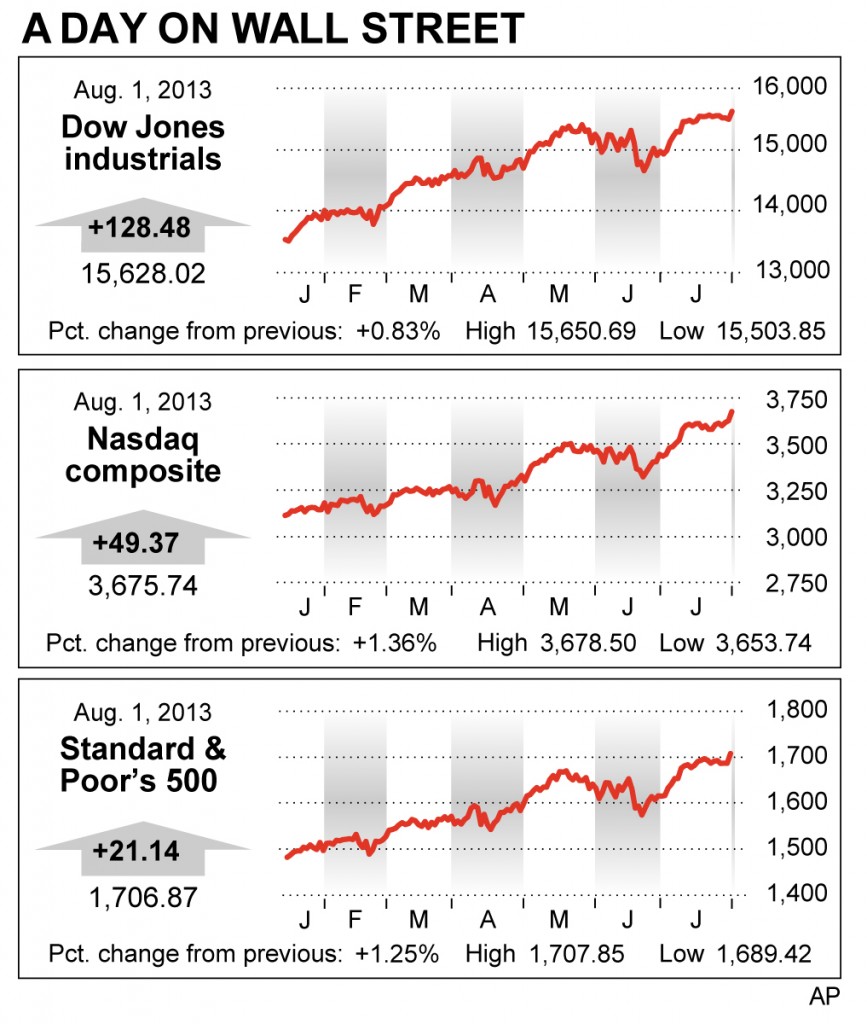 Stocks roared back to record highs on Thursday, driven by good news on the economy.

The Standard & Poor’s 500, the Dow Jones industrial average and the Russell 2000 index set all-time highs. The S&P broke through 1,700 points for the first time. The Nasdaq hit its highest level since September 2000.

The gains were driven by a steady flow of encouraging reports on the global economy.

It’s becoming a familiar template this year. Stock indexes have been setting record highs since April even while the underlying economy is often described as improving, but hardly going gangbusters. Because the stock market often looks ahead 6-9 months, it’s not unusual for stock indexes to be ahead of economic indicators, when the economy is improving or worsening. Right now, stock investors may be anticipating a stronger economy and better earnings next year.

The Nasdaq composite index rose 49.37 points, or 1.4 percent, to 3,675.74, in line with the daily gains of other indexes but still far short of its record. The Nasdaq, which is heavily weighted with technology stocks, briefly veered above 5,000 points in March 2000, just before the internet bubble burst.

Investors said Thursday that the S&P’s crossing over 1,700 points might give consumers a psychological boost, but they were hardly crowing about a new era in stocks. Turns out it’s quite common for indexes to hit records. Since 1950, the S&P has hit a high about 7 percent of the time, or an average of about every 15 days, Courtney said. The S&P’s last record close was just eight trading days earlier, on July 22.

Among the good economic and corporate news that cheered investors Thursday:

An index of transportation stocks also rose sharply. Many investors see that sector as a leading indicator for the economy because freight and shipping companies tend to get busier as the economy improves.

The yield on the 10-year Treasury note rose sharply, to 2.72 percent from 2.58 percent late Wednesday. That means investors were selling U.S. government debt securities, possibly over fears that rates will go higher as the economy strengthens and they’ll lose more money. When yields rise, the value of bonds falls.