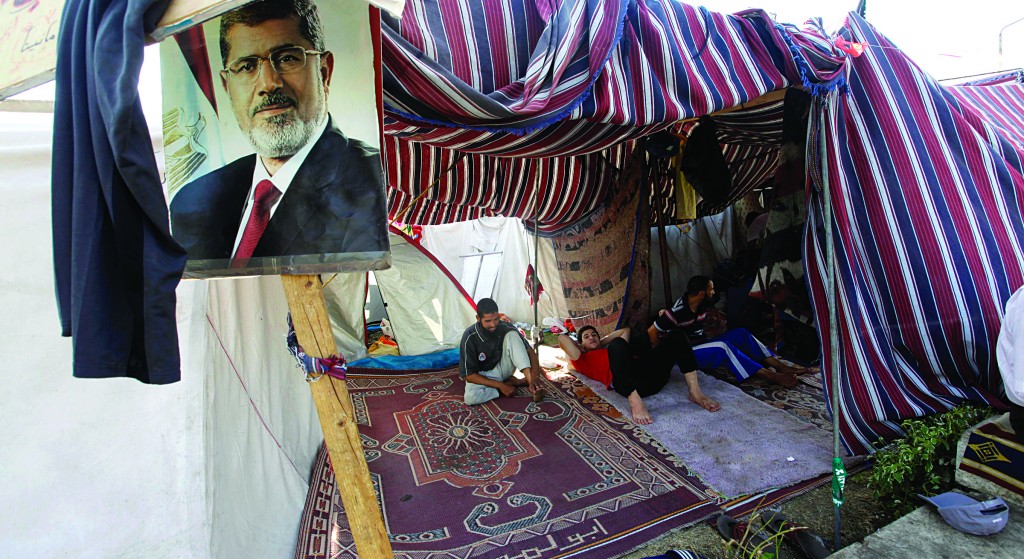 Generators hummed, laundry billowed, men fortified barricades, and boys — one with a gas mask dangling from his neck — played soccer amid escalating calls by security forces to break up the sit-in at the Rabaa al-Adawiya mosque.

Prayer rugs unfurled in the rising heat Thursday as men prayed, dripping with sweat. Doctors stacked medical supplies, and Mona Abdelaal, three children at her side, vowed that her family was willing to die if former president Mohammed Morsi, deposed in a coup last month, was not returned to office.

“This protest is for freedom and legitimacy,” she said. “Our rights have been torn from us. It’s important that my children know the meaning of democracy. We’re not afraid of anyone or anything. If we have to die, even our children, we don’t care.”

Defiance among thousands of Morsi supporters at Rabaa has heightened the prospect of bloodshed if security forces storm the sit-in, which over the last month has taken on the aura of a squatter camp. The military-backed government reiterated Thursday that it would break up the protest, but there were no indications early in the day of an imminent police operation.

The politics and logistics of such a move are confounding. Morsi’s Muslim Brotherhood group, which organized the sit-in, has left little room to negotiate, hoping to intensify international pressure on the government. The army has promised to crush what it describes as “terrorists” and could risk its reputation if it doesn’t quickly shut down the demonstration.

Such a mission would likely involve a massive push by security forces into a dense residential neighborhood crisscrossed by wide streets and narrow alleys that are cluttered with hundreds of tents and barricades of sandbags and bricks. Police and armed civilians killed at least 80 pro-Morsi supporters during a relatively small protest march on Saturday.

Both sides are maneuvering to sway public opinion. Prosecutors said neighbors around the mosque have filed lawsuits, claiming the sit-in is a dangerous nuisance.

But one man claiming to be from the neighborhood stood on the protesters’ stage Wednesday and said the people of the area supported the sit-in, which at night glows with green lasers and blowing banners of Morsi.