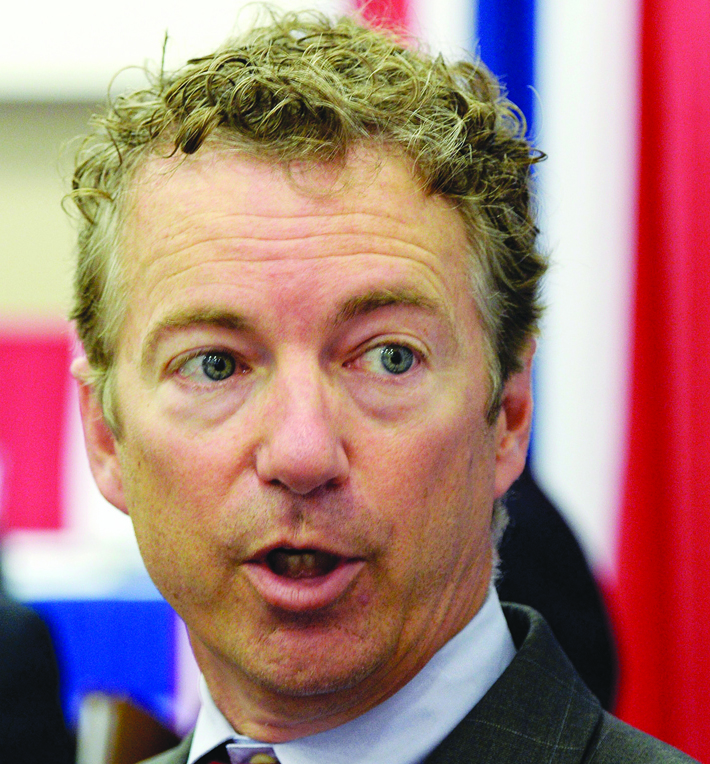 After a weeklong public feud over national security vs. privacy and “gimme, gimme, gimme” earmarks escalating into personal attacks that mesmerized political watchers, neither New Jersey Gov. Chris Christie nor Sen. Rand Paul recall why they started the battle of rhetoric.

But an offer from the Kentucky tea party senator to settle with a beer summit suggests they are ready to ratchet down the quarrel, even though the proposal was met with more zingers from Christie, considered a moderate Republican.

“I’m running for re-election in New Jersey; I don’t really have time for that at the moment,” Christie said on his monthly call-in show Wednesday.

“You know, if I find myself down in Washington, I’ll certainly look him up, but I don’t suspect I’ll be there any time soon. I’ve got work to do here to get re-elected … [and] dealing with the other issues that invariably come on the desk of a governor when you are responsible for actually doing things and not just debating.”

The “splendid little war,” as Alexander Burns and Maggie Haberman of Politico referred to it, took intraparty bickering to a new level, with the two potential presidential candidates sniping at each other in what is seen as a preview of the 2016 race.

The fight began last Thursday, when Christie attacked libertarian ideas on national security as “dangerous” at a Republican governors’ roundtable in Aspen, Colo.

Asked if he was referring specifically to Paul, Christie said, “You can name any number of people who engage in” libertarian debate and “and he’s one of them.”

Paul fired back that Christie’s position supporting drones and government aid hurts the GOP by driving away young voters.

“They’re precisely the same people who are unwilling to cut the spending and their ‘gimme, gimme, gimme — give me all my Sandy money now,’” Paul said. “Those are the people who are bankrupting the government and not letting enough money be left over for national defense.”

Daniel Isaacs, the borough party chief, said he was assured by Paul’s staff that the “gimme” quote was taken out of context.

Paul, however, said his statement “came off exactly” as he’d meant it, and he repeated it on Tuesday. But at that point, he began a climb-down.

“I didn’t start this one, and I don’t plan on starting things by criticizing other Republicans,” he said. “But if they want to make me the target, they will get it back in spades.”

Christie fired back that while he “has nothing personal” against Paul, his home state of Kentucky takes more from the federal government than New Jersey.

Top Christie adviser Mike DuHaime took to Twitter to push back on Paul’s characterization of Christie as a big spender.

“What a joke,” he posted. “New Jersey’s budget is smaller today than in FY ’08. Too bad the federal government can’t say that.”

Both men stepped back from the brink Wednesday, with Paul saying that while Christie started, “it’s gotten a little too personal.”

“I think it’s time to dial it down,” Paul said. “I think we’ve got enough Democrats to attack, and maybe Republicans can quit attacking Republicans.”

When asked about a possible Paul–Christie 2016 ticket, which some have hypothesized, Paul smiled and then invited Christie publicly for a sit-down.

“We’re going to have to patch things up. … I’m inviting him for a beer,” Paul said. “We’ll formalize it, we’ll put it in writing, but I think we could sit down and have a beer and mend things.”

Christie said it was Paul who picked the fight.

“Sen. Paul wanted to make it about Sen. Paul, so that’s fine,” he said. “I don’t know why Sen. Paul is so out of whack about this. At the end of the day, I never called him any names, yet he called me names. I didn’t use any childish-type phrases like ‘gimme, gimme, gimme’ — he did. And I just have to assume from that he’s just trying to get attention.

“And that’s fine. He’s not the first politician who’s used me to get attention in the national media, and I’m sure he won’t be the last.”

The reason both men have not hesitated to bring their philosophical feud into the public sphere is because they have little to lose and much to gain. Both are ambitious men; Christie’s base of moderate Republicans is energized by his talk, as is Paul’s tea party base.

And with the next presidential primary more than two years away, little will be remembered of this past week.

“This early skirmish, in the totality of the race,” political strategist David Carney said, “on a scale of zero to 10 is a zero.”