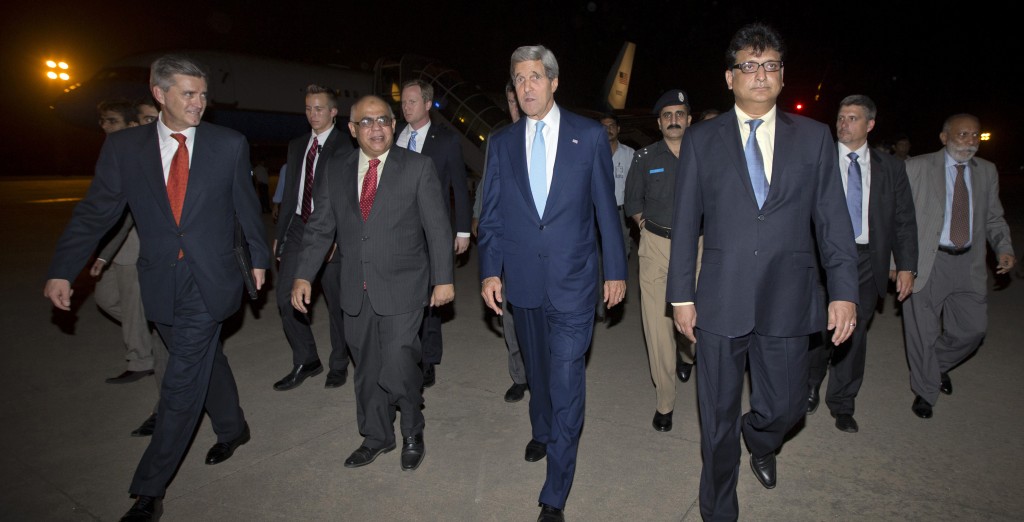 U.S. Secretary of State John Kerry landed in Pakistan late on Wednesday for a day of talks aimed at easing tensions over U.S. drone strikes while putting pressure on the nuclear armed nation to do more to eliminate terrorist havens on its territory.

In Pakistan on an unannounced visit, Kerry is also likely to discuss ways to revive deadlocked talks with the Taliban and broader efforts to stabilize neighboring Afghanistan as U.S.-led forces prepare to pull out most combat troops by late 2014.

“We will discuss with the Pakistanis counter-terrorism, cross-border militancy, the economic agenda and how we can continue to partner in terms of promoting a secure and stable Afghanistan,” a senior U.S. official told reporters travelling with Kerry.

Kerry is keen to put a fresh focus on a relationship severely strained by U.S. drone strikes which Pakistan says breach itssovereignty, and the raid by U.S. special forces which killed Osama bin Laden in a Pakistani town in 2011.

Pakistan itself has seen a spate of attacks by the al Qaida-linked Taliban across the South Asian country since the new prime minister, Nawaz Sharif, was sworn in more than a month ago, raising concerns about regional stability.

The United States, Pakistan’s biggest donor, wants Pakistan to come up with a clear plan and to step up its campaign against groups such as the Haqqani network, which regularly attacks U.S. forces in Afghanistan from its mountain hideouts in Pakistan.

“Safe havens for extremist groups clearly threaten our interests, our allies in the region and most of all Nawaz Sharif’s own ability to execute his reform agenda and provide greater economic stability,” the senior official said.

It is Kerry’s first visit to Pakistan as Secretary of State although he has visited the country in other capacities before. State Department spokeswoman Jen Psaki said Kerry would also visit Britain on his way back to the United States at the end of the week.