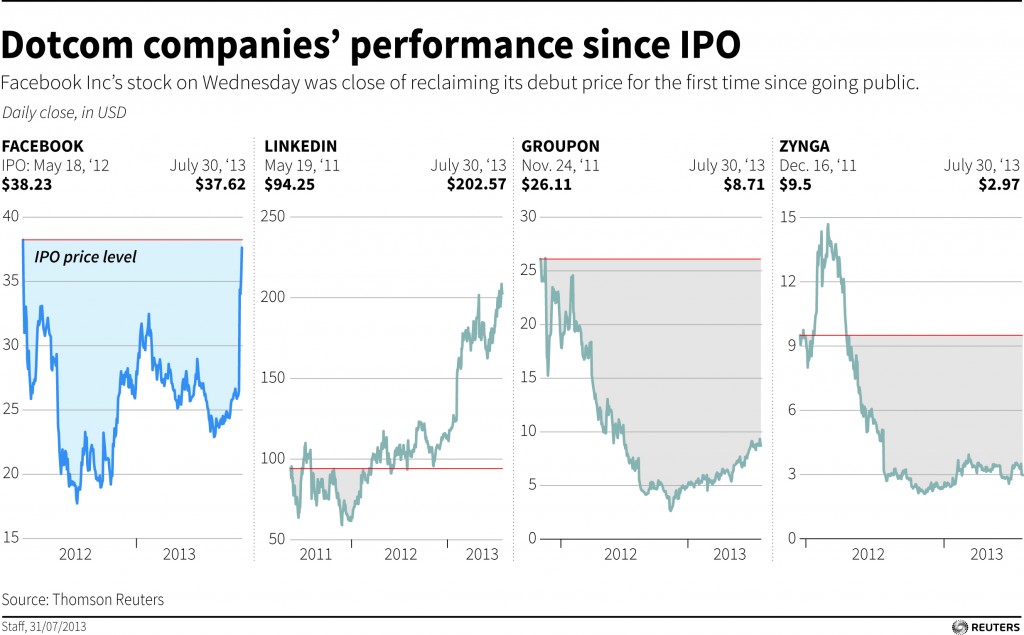 Facebook has found redemption in the form of a soaring stock price.

On Wednesday, the share price of the world’s most populous social network briefly crept past $38 for the first time since its rocky public debut last May. In doing so, Facebook cleared a symbolic hurdle that has eluded the company for more than a year.

Facebook’s ill-fated first trading day on May 18, 2012 was marred by technological glitches on the Nasdaq stock market. The stock closed with a disappointing 23-cent gain. And its performance didn’t improve, hitting a low of $17.55 last September.

“I think Facebook in general, and Zuckerberg in particular, felt that they let everybody down,” said Wedbush analyst Michael Pachter of Facebook Inc.’s 29-year-old founder and CEO, Mark Zuckerberg. “And by everybody, I mean all their employees who had stock, all their early private investors who had stock.”

When Facebook’s stock was trading around $24 in June, Zuckerberg said at the company’s first shareholder meeting, “We understand that a lot of people are disappointed in the performance of the stock, and we really are too.” He also said that the company takes its responsibility to shareholders “very seriously.” But he stressed that Facebook has always focused on building its long-term value — its user base, its advertising business, the apps that connect to it, its online network. In other words, build it and the value will come.

At the moment, investors agree. Facebook has been on a roll since reporting stronger-than-expected earnings last week. The company posted the largest revenue gain it has seen since late 2011, when it was still a private company. Its stock price is up 39 percent since it reported quarterly results on July 24. In comparison, the Standard & Poor’s 500 index has gained less than 1 percent in that time.

Investors are especially upbeat about Facebook’s fast-growing mobile advertising revenue, which went from zero at the start of 2012 to $656 million, or 41 percent of total ad revenue, in the April-June quarter this year.

Facebook’s ability to grow mobile revenue was one of the biggest concerns in the weeks leading up to, and the months after, its initial public offering. Investors were worried that Facebook had not figured out how to make money from mobile advertisements, even as more and more of its users were accessing it on smartphones and tablets.

Facebook urged patience, but until last fall, it did not disclose how much money it was bringing in from mobile ads. That didn’t sit well with investors, who couldn’t infer from Facebook’s lack of guidance whether the company was on the right path. More importantly, they couldn’t determine whether Facebook’s stock was worth $38 or $18.

“Share price volatility is caused by uncertainty,” Pachter said. And uncertainty, he added, “is caused by poor communication from management. When they went public, there was just no comment on mobile other than a statement that it was a risk.”

Then, last week, the company surprised Wall Street with mobile ad dollars that blew past the expectations of Pachter and other analysts.

Zuckerberg had insisted all along that the company’s mobile strategy would become clearer over time. He said last October that he wanted to “dispel this myth that Facebook can’t make money on mobile.” At the time, in the third quarter of 2012, Facebook was making about $150 million from mobile ads, which amounted to 14 percent of total ad revenue.

“And the most important thing to understand here,” Zuckerberg said in the Oct. 23 conference call, “is that we’re just getting started with our mobile product development and monetization.”

Facebook’s revenue grew 53 percent to $1.81 billion from $1.18 billion, well above the $1.62 million that analysts polled by FactSet had predicted. The company has also quickened the pace of its growth. In the first quarter, revenue grew 38 percent, and in the fourth quarter of last year, 40 percent.

Still, Facebook has room to grow, and investors will expect more good news if the stock is to continue flying high. Research firm eMarketer expects Facebook to increase its mobile advertising revenue more than fourfold, to over $2 billion, this year. That would give the Menlo Park, Calif. company a 13 percent share of the global mobile ad market, up from about 5 percent last year.

But Facebook is currently No. 2 in mobile ads, well behind Google. EMarketer estimates that Google had a 52 percent share of the global $8.8 billion mobile ad market last year. This year, the firm expects Google’s share to grow to 56 percent.

“Essentially, we think a lot of favorable news and expectations are priced into the stock,” he said in a note to investors.