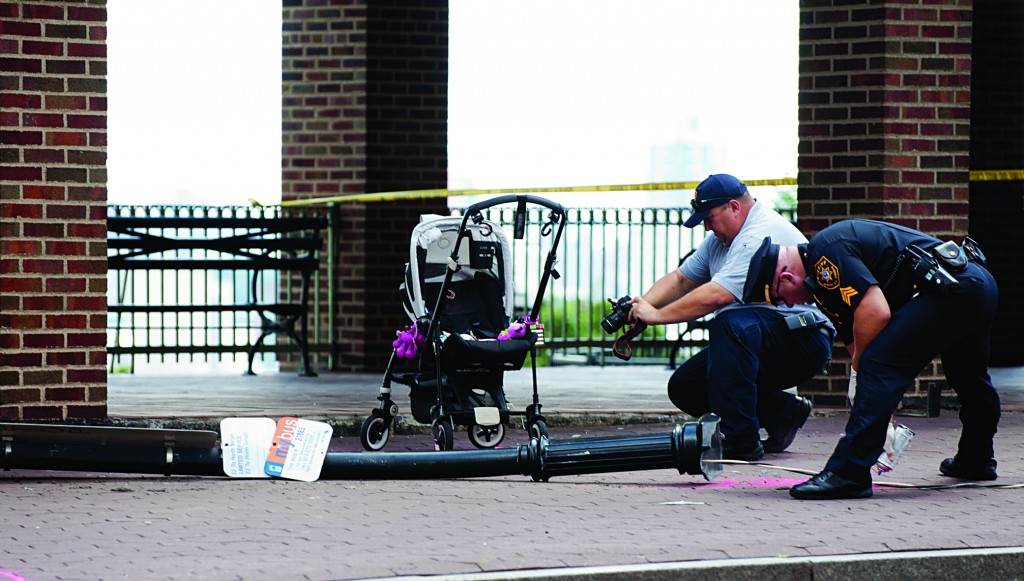 A family friend says the family of an 8-month-old northern New Jersey infant killed in a bus crash is struggling to cope with the tragedy, shortly after police announced that charges will be brought against the bus driver who hit a light pole that toppled onto a stroller, killing the infant.

Forty-eight-year-old Idowu Daramola of Thornwood, N.Y., faces charges including death by auto and using a cellphone while operating a vehicle. Seven other people were injured in the chain-reaction crash.

Julio Marenca spoke to reporters Wednesday afternoon in North Bergen, the town across the Hudson River from Manhattan where the Paredes family lives.

Little Angelie Paredes was being pushed along by her mother Maylin on Tuesday evening when a shuttle bus veered out of control and smashed into a light pole, toppling it onto her stroller.

“I heard a loud crash and people screaming,” said Iris Pizarro, who lives in an apartment building across the street. “That’s when I ran to the window and saw the mother over the baby screaming, “My daughter! My baby!”

On Wednesday morning, a makeshift memorial of lit candles, teddy bears and flowers had been set up as utility crews worked to reinstall the light pole. The bus stop sits between a park and playground atop a swath of trees and shrubs running down a steep slope.

The vehicle was operated by Sphinx Transportation, which provides shuttle service between New Jersey and New York City. A woman waiting at the bus stop Wednesday said she frequently takes the shuttle bus if it arrives while she is waiting for a New Jersey Transit commuter bus. But she said she wasn’t surprised that one of the buses was involved in an accident.

“I’m not shocked at all that it was one of these drivers,” Yorvira Kavanaugh said. “They’re always on their phones, always arguing with each other. Sometimes they pull up next to each other and argue about passengers.”