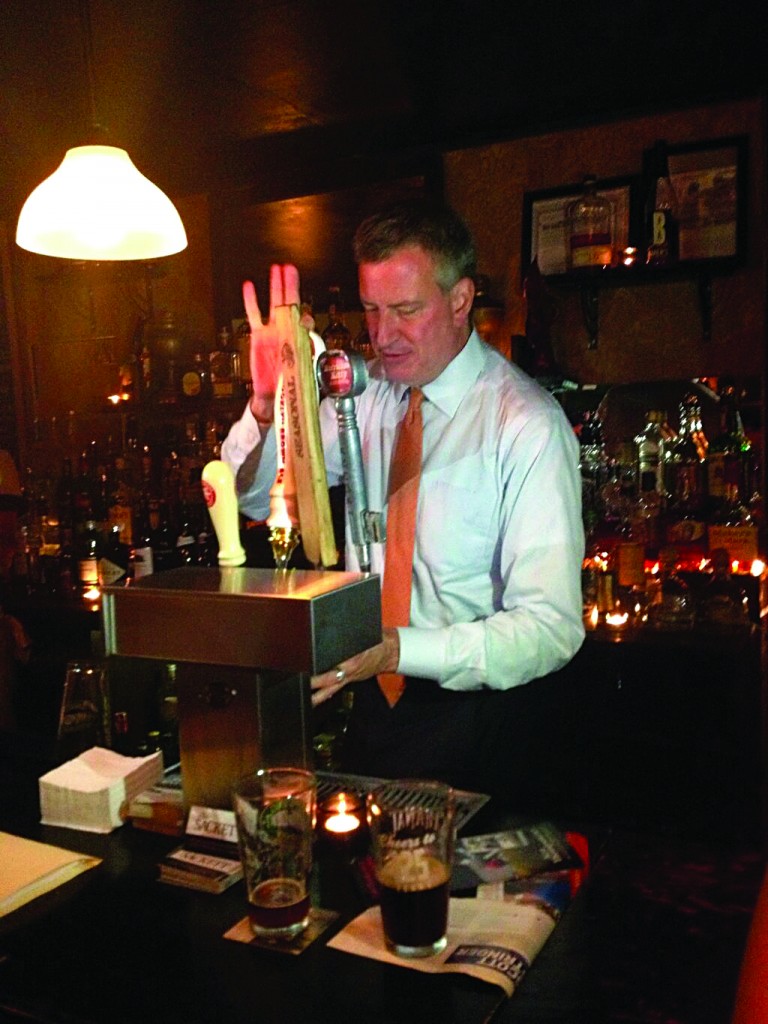 With recent polls showing four candidates potentially in the top tier of the New York City mayoral race, even a tiny margin of victory in a straw poll in which less than 100 youths voted becomes a cause for celebration.

Though some of the results were wildly off course — Charles Hynes is favored to win reelection for Brooklyn district attorney yet lost in the straw poll to rival Kenneth Thompson by a 65 to 35 percent margin — de Blasio, the city’s public advocate, released a statement touting his triumph.

“Young Progressives Unite Across NYC to Back de Blasio for Mayor,” headlined the press release, in which de Blasio said he was “determined to keep standing up for the issues young New Yorkers across the five boroughs care about most,” such as “a tax on the wealthiest in this city to pay for early education and after-school programs … [and] ban racial profiling in the NYPD.”

Never mind that his 30 percent consisted of a mere 54 votes. Compare that to runner-up John Liu, the city’s comptroller, who got 42 votes, or 24 percent. While de Blasio garnered 21 percent in a poll this week — his highest ever in the race — Liu has been languishing in the single digits. And frontrunner Christine Quinn, the city council speaker, got 26 percent in the real poll, but only 16 percent in the straw survey.

The poll Tuesday took place concurrently in separate meetings in Brooklyn, Manhattan, Queens and Staten Island. In the comptroller’s race, they voted 61 percent for Stringer, Manhattan’s borough president, over 39 percent Eliot Spitzer. And they backed James, a Democratic councilwoman from Flatbush, for public advocate by 46 percent, rejecting three others.

State Sen. Eric Adams was the biggest winner of the evening, pulling 96 percent support for Brooklyn borough president in a race with no real opponent.

Meanwhile, former Rep. Anthony Weiner responded Tuesday evening to the chorus of voices calling on him to withdraw from the race by releasing a campaign video declaring that New Yorkers, “fight through tough things.”

“I know that there are newspaper editors and other politicians that say, ‘Boy, I wish that guy Weiner would quit,’” Weiner says. “They don’t know New York. They certainly don’t know me. ‘Quit’ isn’t the way we roll in New York City.”

Weiner intimated later that night at a candidates’ forum that his opponents want him out since he has better ideas.

In other news, for the first time, Bill Thompson and de Blasio, who swapped roles as the number two in the race over the past week since Weiner imploded, traded barbs with each other as they jockey for attention and votes.

“We’ve all seen politicians play fast and loose with the truth,” wrote Rep. Greg Meeks and Assemblymen Nick Perry and Walter Mosley, all blacks, “but Bill de Blasio is tying himself up in knots trying to tell people that the only African American in the race for Mayor wants ‘to have it both ways’ on racial profiling.”

Striking the most moderate tone of all the candidates, Thompson had initially said that he does not want to end the controversial police tactic, just to modify it. On Sunday, however, he accused the NYPD of acting similar to George Zimmerman, who was found not guilty of murdering 17-year-old African-American Trayvon Martin in Florida.

“The way I see it,” State Sen. Bill Perkins, a black surrogate for de Blasio, said in a statement released by the campaign, “facts are facts — Bill Thompson once said to The New York Times there was an ‘overreaction to stop and frisk’ and even today he stands with Mayor Bloomberg and Ray Kelly in refusing to support the Inspector General bill and the racial profiling ban that would finally end the misuse of stop-and-frisk on our streets.”

The Thompson statement slammed de Blasio for politicizing the subject.

“Frankly, the subject of race in New York City — and America — is difficult enough to discuss in the public square without politicians like Mr. de Blasio trying to grandstand about it,” they wrote.

“Once again, some New York children almost got killed by gunshots. One was only 9 years old,” Catsimatidis narrates.

“Christine Quinn and the City Council are so out of touch. They want to silence our police. That’s a dumb idea. As mayor, I will put more police on the street and would love to keep Ray Kelly on the job. I want to keep you and your family safe.”

Catsimatidis, a Greek-born billionaire supermarket and gas magnate, faces an uphill primary battle with Joseph Lhota, a former Giuliani administration official who leads in all polls. He has attacked Lhota, who led the city’s transit agency until the beginning of this year, for raising fees.