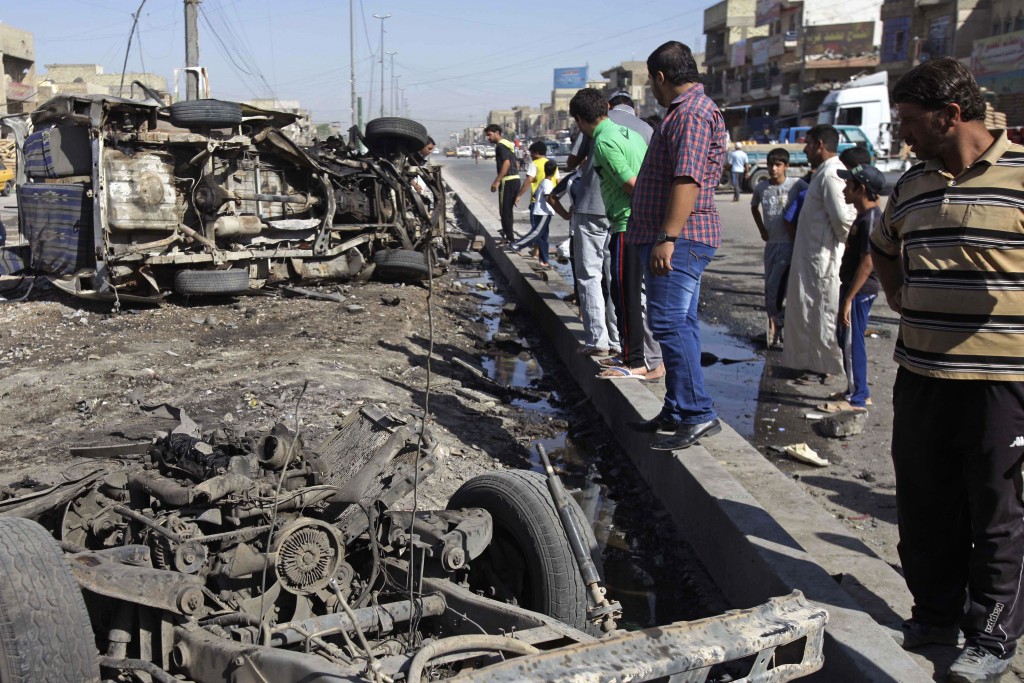 More than a dozen explosions, mainly from car bombs, ripped through marketplaces, parking lots, a cafe and rush-hour crowds in Iraq on Monday, killing at least 58 people and pushing the country’s death toll for the month of July toward the 700 mark, officials said.

The bombings — 18 in all — are part of a wave of bloodshed that has swept across the country since April, killing more than 3,000 people and worsening the already strained ties between Iraq’s Sunni minority and the Shiite-led government. The scale and pace of the violence, unseen since the darkest days of the country’s insurgency, have fanned fears of a return to the widespread sectarian bloodletting that pushed Iraq to the brink of civil war after the 2003 U.S.-led invasion.

With two days left in July, the month’s death toll now stands at 680, according to an Associated Press count. Most of those have come during Ramadan, the Muslim month of dawn-to-dusk fasting that began July 10, making it Iraq’s bloodiest since 2007.

There was no immediate claim of responsibility for Monday’s attacks, but the Interior Ministry blamed al-Qaida’s Iraqi branch and accused it of trying to widen the rift between Sunnis and Shiites.

“The country is now facing a declared war waged by bloody sectarian groups that aim at flooding the country with chaos and reigniting the civil strife,” the ministry said in a statement posted on its website.

The U.S. Embassy in Baghdad condemned Monday’s attacks, and stressed that the United States “stands firmly with Iraq in its fight against terrorism.”

Iraq’s violence escalated after an April crackdown by security forces on a Sunni protest camp in the northern town of Hawija that killed 44 civilians and a member of the security forces, according to U.N. estimates. The bloodshed is linked to rising sectarian divisions between Iraq’s Sunnis and Shiites as well as friction between Arabs and Kurds, dampening hopes for a return to normalcy nearly two years after U.S. forces withdrew from the country.

Monday’s attacks stretched from Mosul in the north to Baghdad in central Iraq and Basra in the south.

In the capital alone, a dozen car bombs struck at least nine neighborhoods, all but two of them predominantly Shiite, in the span of an hour, killing at least 37 people, police said. The deadliest blasts hit the eastern Shiite slum of Sadr City, where two bombs killed at least nine civilians and wounded 33 others.