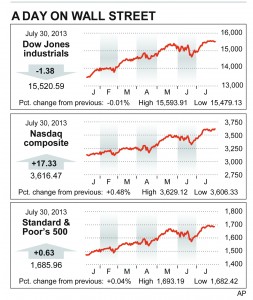 On the stock market Tuesday, it felt like late-summer inertia had already set in.

U.S. stocks wandered between the tiniest of gains and losses before closing mixed. Traders were indecisive as companies reported disparate earnings news, and many were disinclined to make any big moves before getting direction from the Federal Reserve, which is scheduled to release an updated policy statement Wednesday.

The calendar said late July, but on the stock exchange it seemed more like August, when many traders take off for vacation and fewer stocks trade hands. The Dow Jones industrial average rose as much as 72 points in early trading — less than 0.5 percent — before flickering lower. It dipped into the red for most of the afternoon and closed down 1.38 points, or 0.01 percent, at 15,520.59.

“It seems like the doldrums of summer have set in,” said Dave Abate, senior wealth adviser at Strategic Wealth Partners in Seven Hills, Ohio.

The Nasdaq composite rose 17.33 points, or 0.5 percent, to 3,616.47, though even that gain was largely because Apple, its biggest component, was up more than 1 percent.

The Standard & Poor’s 500 index plodded just a fraction higher, up 0.63 point, or 0.04 percent, to 1,685.96. Three of its industry sectors rose, led by technology stocks. Seven fell, dragged down by telecommunications companies.

This earnings season has presented a picture encouraging on some fronts and troubling on others. Many companies, including big names like Apple and Visa, have posted better-than-expected results, and analysts predict that second-quarter earnings are up 4.7 percent for companies in the S&P 500, according to S&P Capital IQ. But the picture has its blemishes, including the fact that many of the gains are based not on business growth but on cost-cutting: Revenue is down about 0.5 percent.

“There’s a little bit of swapping chairs on the deck,” Abate said.

Outside of earnings reports, traders were keeping a close eye on the Federal Reserve, which began a two-day meeting Tuesday before releasing the updated policy statement.

Conjectures about the central bank have had a powerful influence on the stock market in recent months. Traders have bought and sold stocks while hanging on to every word of Federal Reserve Chairman Ben Bernanke, looking for clues about when the Fed might pull back on its bond-buying program or start raising interest rates. The central bank has been buying bonds to try to prop up stocks and encourage borrowing. It has also been keeping interest rates low, all in an attempt to pump life into a lagging economy.

“This week it’s all about Bernanke and the Fed statement,” said Bill Strazzullo, chief strategist of Bell Curve Trading. “Stocks need a supportive statement … to go higher. That is the key driver.”

The Fed has said it might start to pull back on its bond purchases later this year if the economy continues to improve, but the timing remains uncertain. The Fed has also said it won’t raise its benchmark short-term interest rate until the unemployment rate, which currently stands at 7.6 percent, dips below 6.5 percent.

The yield on the 10-year Treasury note was unchanged from late Monday at 2.60 percent. The yield is a benchmark for many kinds of loans including home mortgages.

—The Mosaic Co., maker of a key ingredient in crop fertilizers, was the worst performer on the S&P 500. It plunged after a Russian fertilizer company said it would drop out of a cartel that keeps prices high. Mosaic fell $9.15, or 17 percent, to $43.81.

— Masco jumped $1.06, or 5 percent, to $20.80. The company, which makes cabinets, plumbing fixtures and other building products, posted better-than-expected earnings late Monday, boosted by a surge in home construction.

This article appeared in print on page 28 of the July 31st, 2013 edition of Hamodia.