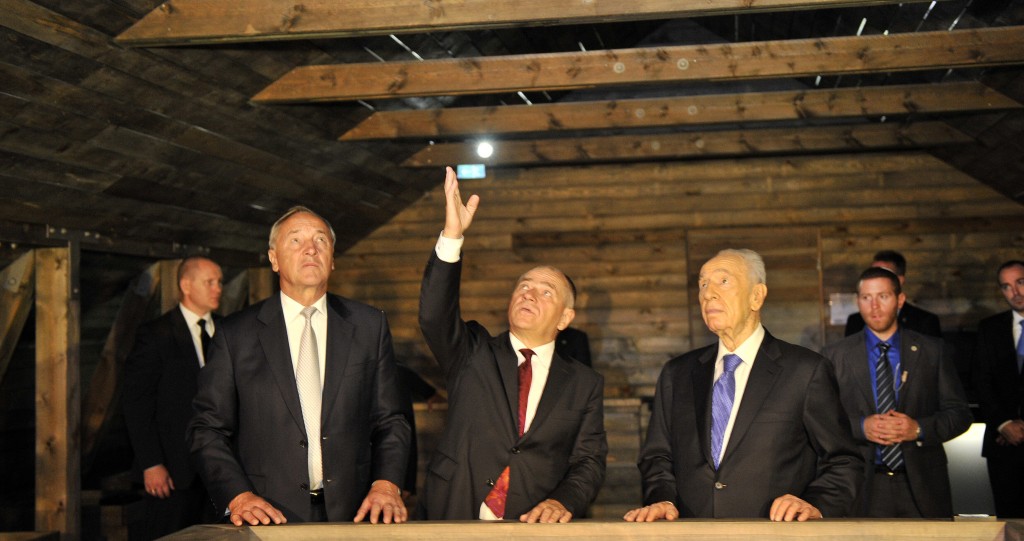 At least 10 suspected Nazi war criminals ordered deported by the United States never left the country, according to an Associated Press review of Justice Department data — and four are living in the United States today. All remained eligible for public benefits such as Social Security until they exhausted appeals, and in one case even beyond.

Quiet American legal limbo
was the fate of all 10 men uncovered in the AP review. The reason: While the U.S. wanted them out, no other country was willing to take them in.

That’s currently the case of Vladas Zajanckauskas in Sutton, Massachusetts. It’s the case of Theodor Szehinskyj in West Chester, Pennsylvania. Of Jakiw Palij in New York City. And of John Kalymon in Troy, Michigan.

All have been in the same areas for years, stripped of citizenship and ordered deported, yet able to carry out their lives in familiar surroundings. Dozens of other Nazi war crimes suspects in the U.S. were also entitled to Social Security and other public benefits for years as they fought deportation.

The United States can deport people over evidence of involvement in Nazi war crimes, but cannot put such people on trial because the alleged crimes did not take place on American soil. The responsibility to prosecute would lie with the countries where the crimes were committed or ordered — if the suspects ever end up there.

In the 34 years since the Justice Department created an office to find and deport Nazi suspects, the agency has initiated legal proceedings against 137 people. Fewer than half — at least 66 — have been removed by deportation, extradition or voluntary departure.

At least 20 died while their cases were pending. In at least 20 other cases, U.S. officials agreed not to pursue or enforce deportation orders, often because of poor health, according to a 2008 report by the Justice Department. In some cases, the U.S. government agreed not to file deportation proceedings in exchange for cooperation in other investigations, the report said.

But the key stumbling block has been the lack of political will by countries in Europe to accept those ordered to leave.

“Without any doubt, the greatest single frustration has been our inability, in quite a number of cases now, to carry out the deportation orders that we’ve won in federal courts. We can’t carry them out because governments of Europe refuse to take these people back,” Eli Rosenbaum, the longtime head of the Justice Department agency charged with investigating accused Nazi war criminals, said in the 2011 documentary “Elusive Justice: The Search for Nazi War Criminals.”

Justice officials declined to make Rosenbaum available for an interview.

The four men still living in the U.S despite deportation orders have all exhausted appeals:

– Zajanckauskas, 97, remains in Massachusetts 11 years after authorities first began the denaturalization process. He was ordered deported to his native Lithuania in 2007, and ran out of appeals in 2010 but remains in the U.S. because other countries, including Lithuania, won’t accept him, Rosenbaum has said. Zajanckauskas took part in the “brutal liquidation” of the Warsaw Ghetto, according to Rosenbaum. Zajanckauskas, who didn’t return a message from the AP, has denied being in Warsaw at the time.

– Szehinskyj, 89, remains in Pennsylvania nearly 14 years after DOJ began a case against him. He was denaturalized and ordered deported to his native Ukraine, Poland or Germany, and exhausted all appeals in 2006. The Department of Justice has said no country has been willing to accept him. Authorities say Szehinskyj was an armed guard at Nazi concentration camps in Germany and Poland, a claim he has denied. Szehinskyj’s attorney didn’t return messages from the AP.

– Palij, 89, remains in New York 11 years after the DOJ initiated a case against him and seven years after he exhausted appeals. Court records say Palij — born in a part of Poland that is now part of Ukraine — was an armed guard at an SS slave labor camp for Jews in Nazi-occupied Poland until at least the spring of 1943, and helped to keep prisoners from escaping. Palij has denied the accusations. The original order deporting Palij to Ukraine has been amended to allow deportation to Germany, Poland or any other country willing to accept him. Justice officials say none has been willing. A man who answered the phone at Palij’s number had trouble hearing and could not carry out a phone conversation. A woman who answered the phone at the office of Palij’s attorney said he does not speak to reporters.

– Kalymon, 92, is still in Michigan despite exhausting appeals earlier this year in a process that took nine years. Prosecutors said Kalymon, who was born in Poland, was a member of the Nazi-sponsored Ukrainian Auxiliary Police in Lviv, which rounded up Jews and imprisoned them. Prosecutors said Kalymon also shot Jews. He was ordered deported to Ukraine, Poland, Germany or any other country that would take him. His attorney, Elias Xenos, said his client was a teenage boy who was essentially guarding a sack of coal.

“That’s not the government’s position, of course. But they’ve run out of true persecutors, and they are trying to now prosecute people on the fringes,” Xenos said.

He said he is not aware of any country that has agreed to take Kalymon, who he said has Alzheimer’s disease and cancer.

In Poland, prosecutor Grzegorz Malisiewicz said an investigation of Kalymon was closed in January because authorities couldn’t definitively tie him to crimes committed in 1942. In Germany, Munich prosecutors have been investigating Kalymon on suspicion of murder since 2010.

Efraim Zuroff, chief Nazi hunter for the Simon Wiesenthal Center, said many countries lack the political will to accept suspected Nazi criminals who have been ordered deported: “I don’t think it’s any lack of effort by the American government.”

Germany has taken the position that people involved in Nazi crimes must be prosecuted, no matter how old or infirm, as it did in the case of retired Ohio autoworker John Demjanjuk. He died last year at age 91 while appealing his conviction of being an accessory to 28,060 murders while a guard at the Sobibor death camp.

Before that case, Germany had been reluctant to prosecute Nazi war crimes suspects who weren’t German citizens, said Stephen Paskey, a former Justice Department attorney who worked on the Demjanjuk and Zajanckauskas cases. Germany has also resisted accepting those who are ordered deported because, like other countries, it doesn’t want to be seen as a refuge for those with Nazi pasts, the Department of Justice said.

The case of Johann Leprich fell into that category. Authorities said Leprich, of Clinton Township, Michigan, served as an armed guard at a Nazi camp in Austria during World War II. He was 78 when he was ordered deported in 2003. Germany, Hungary and Leprich’s native Romania — which passed a law in 2002 barring the entry of war crimes suspects — all refused to accept him. A technical issue related to Leprich’s deportation order allowed him to remain eligible for public benefits until he died in 2013, although for unclear reasons he stopped receiving them long before that.

According to AP’s analysis of DOJ records, five other Nazi suspects were ordered deported but remained in the U.S. until they died because no country was willing to take them:

– Osyp Firishchak, 93, of Chicago, died last November, nine months after exhausting appeals. A U.S. judge concluded that Firishchak had lied when he said he was not a member of the Ukrainian Auxiliary Police, which helped Nazis arrest Jews in large numbers and sent them to labor and death camps. He was born in territory that was then Czechoslovakia and is now part of the Ukraine. He was ordered deported to Ukraine in 2007.

– Anton Tittjung, of Wisconsin, died last year at age 87. Born in a part of the former Yugoslavia that is now Croatia, he was accused of being an armed guard at the Mauthausen concentration camp in Austria and was ordered deported to Croatia in 1994. He said he was not a Nazi. He exhausted his appeals in 2001 but remained in the U.S. because Croatia would not accept him, saying he was neither born there nor a citizen of Croatia, according to a DOJ report. The U.S. also asked Austria and Germany to accept him; both refused.

– Mykola Wasylyk spent most of his American years in the Catskills region, 90 miles north of New York City, and died in North Port, Florida, in 2010 at age 86. He exhausted his appeals in 2004. He was born in former Polish territory that is now part of Ukraine. Prosecutors say he was an armed guard at two forced labor camps in Nazi-occupied Poland, but he claimed he was unaware that prisoners there were persecuted. The United States ordered him deported to Ukraine. At Wasylyk’s request, the DOJ amended the order to seek to deport him first to Switzerland. Neither country took him in.

Leading Holocaust experts express frustration at the failure to remove such men from the United States.

“That they have been able to live out their lives enjoying the freedoms of this country, after depriving others of freedom and life itself, is an affront to the memory of those who perished,” said Paul Shapiro, director of the Center for Advanced Holocaust Studies at the U.S. Holocaust Memorial Museum in Washington.

The reluctance of countries to accept suspected Nazi collaborators could become a factor in the case of Michael Karkoc, a Minnesota man identified in an AP investigation last month as a commander in a Nazi SS-led unit accused of massacres.

Both German and Polish prosecutors are investigating whether there is enough evidence to bring charges against Karkoc, 94, and seek extradition. If neither country decides to charge Karkoc, U.S. officials may try to hold him accountable through separate civil proceedings that would strip him of his citizenship and seek to have him deported. In that event, the U.S. would need to find a country that would take him in — and the earlier cases suggest that may prove difficult.

“No one is obligated to take him unless he is charged,” Paskey said. “Ukraine wouldn’t have to take him. No one else would want him.”

The AP investigation revealed that Karkoc lied to American immigration officials to enter the United States after the war, saying he had no military experience and concealing his work as an officer and founding member of the SS-led Ukrainian Self Defense Legion. Records don’t show Karkoc had a direct hand in wartime atrocities, but the evidence shows that he had command responsibility over a unit that massacred Polish civilians. Karkoc’s family claims he was never involved in Nazi war crimes. Justice officials would not confirm whether the U.S. is investigating Karkoc.

Paskey said the U.S. could have a good denaturalization case against Karkoc, because prosecutors wouldn’t have to prove he had a direct hand in war crimes. But the quickest — and perhaps only — way to remove him from the U.S. would be if he is charged criminally.

“Unless Poland or Germany decides to prosecute him,” Paskey said, “he is likely to die in the United States.”

Two other Nazi suspects who died in the U.S. after exhausting appeals are Bronislaw Hajda, who died in Schiller Park, Illinois, in 2005 at age 80 and Michael Negele, who died in St. Peters, Missouri, in 2008 at age 87.