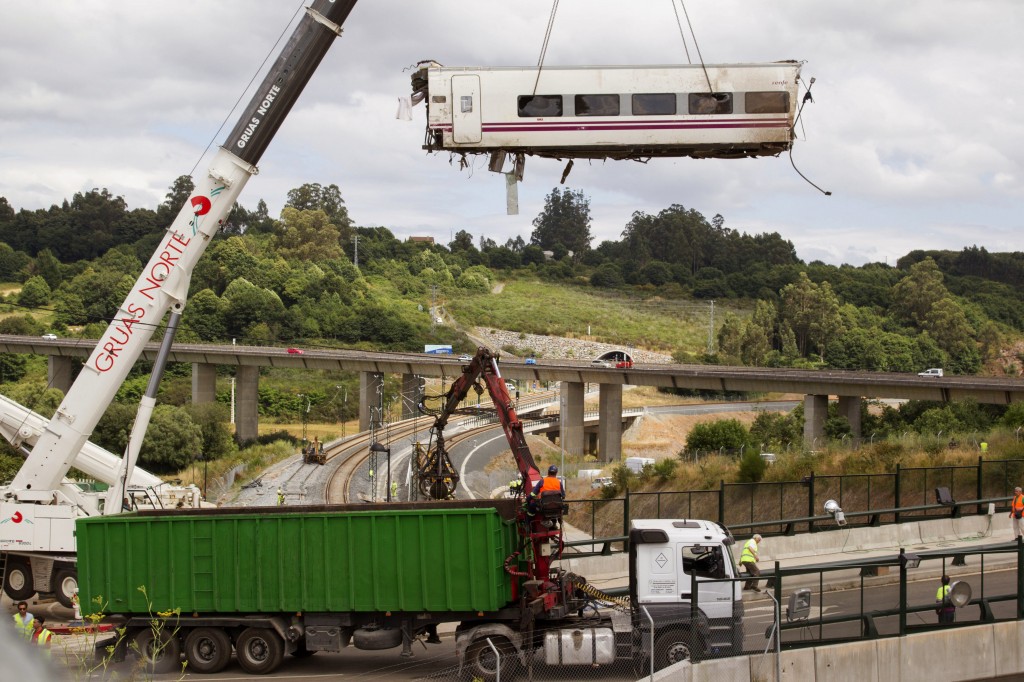 The driver was on the phone with a colleague and apparently looking at a document as his train barreled ahead at 95 mph (153 kph) — almost twice the speed limit. Suddenly, a notorious curve was upon him.

He hit the brakes too late.

The train, carrying 218 passengers in eight carriages, hurtled off the tracks and slammed into a concrete wall, killing 79 people.

On Tuesday, investigators looking into the crash announced their preliminary findings from analysis of the train’s data-recording “black boxes,” suggesting that human error appears to be the cause of Spain’s worst railway disaster in decades.

The derailment occurred near Santiago de Compostela, a city in northwestern Spain, late last Wednesday. Some 66 people injured in the crash are still hospitalized, 15 of them in critical condition.

According to the investigation so far, train driver Francisco Jose Garzon Amo received a call from an official of national rail company Renfe on his work phone in the cabin, not his personal cellphone, to tell him what approach to take toward his final destination.

The Renfe employee on the telephone “appears to be a controller,” a person who organizes train traffic across the rail network, said a statement from a court in Santiago de Compostela, where the investigation is based. “From the contents of the conversation and from the background noise it seems that the driver (was) consulting a plan or similar paper document.”

The train had been going as fast as 119 mph (192 kph) shortly before the derailment, and the driver activated the brakes “seconds before the crash,” according to the statement. The speed limit on the section of track where the crash happened was 50 mph (80 kph).

Authorities have said that a high-tech automatic braking program called the European Rail Traffic Management System was installed on most of the high-speed track leading from Madrid north to Santiago de Compostela — the route Garzon’s train took. But the cutting-edge coverage stops just 5 kilometers (3 miles) south of where the crash occurred, placing a greater burden on the driver to take charge.

The Spanish rail company has said the brakes should have been applied four kilometers (2.5 miles) before the train hit the curve.

A court spokeswoman told The Associated Press that the boxes “did not indicate any technical failures” contributed to the accident. She spoke on condition of anonymity because court regulations bar her from identifying herself by name.

Garzon was provisionally charged Sunday with multiple counts of negligent homicide. He was not sent to jail or required to post bail because none of the parties involved felt there was a risk of him fleeing or attempting to destroy evidence, according to a court statement.

Investigators from the court, forensic police experts, the Ministry of Transport and Renfe examined the contents of the two black boxes recovered from the lead and rear cars of the train.

But the investigation is ongoing. The next steps include measuring the wheels on the cars and examining the locomotive, the statement said, without providing an explanation for those checks.

Sniffer dogs will also be used to search for human remains in the wreckage, it said.