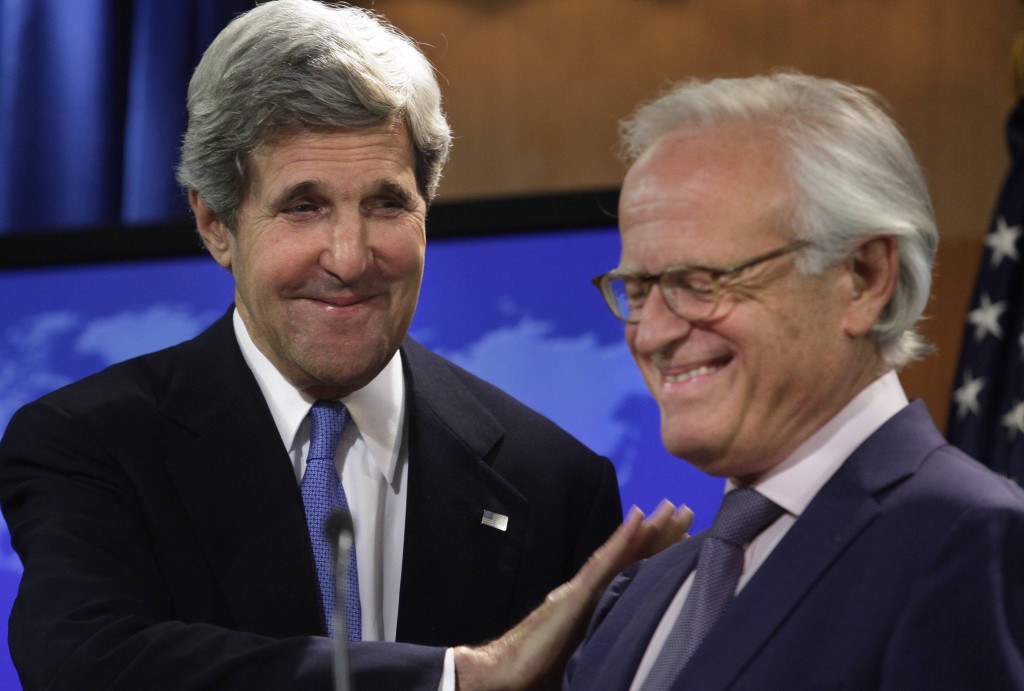 Israeli and Palestinian officials put forward clashing formats for peace talks due to resume in Washington on Monday for the first time in nearly five years after, intense U.S. mediation.

U.S. Secretary of State John Kerry is due to bring the negotiators together in the evening and on Tuesday to renew talks that broke down in 2010.

This time, “all of the issues that are at the core of a permanent accord will be negotiated simultaneously,” Silvan Shalom, a member of Israeli Prime Minister Binyamin Netanyahu’s cabinet and a former foreign minister, told Israel’s Army Radio.

Yasser Abed Rabbo, a top official in Palestinian Authority President Mahmoud Abbas’s
Palestine Liberation Organization, said the U.S. letter of invitation to the Washington talks had not specified which disputes were to be discussed.

But Abed Rabbo told Voice of Palestine radio the talks “will begin, in principle, on the issues of borders and security.”

Shalom defended Netanyahu’s refusal to agree to preconditions on borders. “Had the matter of borders and territory been given over, what incentive would they (Palestinians) have had to make concessions on the matter of refugees or Yerushalyim?” Shalom asked.

“The meetings in Washington will mark the beginning of ‘final status’ talks,” Kerry spokeswoman Jen Psaki said. “They will serve as an opportunity to develop a procedural work plan for how the parties can proceed with the negotiations in the coming months.”

The actual negotiations are to be held in the Middle East.

In what it dubbed a goodwill gesture required to restart diplomacy, the Israeli cabinet on Sunday approved the release in stages of 104 imprisoned Palestinian terrorists.

The Israeli judiciary and prisons system already had begun taking the practical steps, including paperwork for the prisoners’ release, even before the Cabinet decision was announced on Sunday, according to Ynet.

The list of prisoners will be submitted to Israeli President Shimon Peres, who must sign the sentence reductions. The names of the prisoners will be made public in order to allow  appeals to the High Court to prevent the release. Such appeals made prior to the prisoner swap for Gilad Shalit were rejected by the court.

The inclusion of 22 Israeli Arab prisoners in the total had been a sticking point in six hours of Cabinet deliberations on Sunday. Only when Netanyahu agreed to treat their release separately did the ministers approve the deal.

Defense Minister Moshe Yaalon articulated opposition to their inclusion, saying shortly before the final vote on Sunday, “I will vote for the decision but with a heavy heart. I would oppose the release of Arab Israeli terrorists. Abbas does not represent them.” Yaalon justified his support for the decision, however, citing the fact that without the prisoner release the Palestinians would not come to Washington and Israel would be blamed for the collapse of the peace process.

A sign of the emotional reaction to the cabinet decision within Israel was a front-page headline on Monday in one of the large-circulation dailies: “The murderers will be released.”

In the U.S., the Conference of Presidents of Major American Jewish Organizations expressed support for the Netanyahu government’s decision: “The government of Israel has once again demonstrated the extent of its commitment by the difficult and even painful decision to release 104 prisoners, many of whom are guilty of the murder of innocent Israeli civilians, and, understandably, evoked much negative reaction. While there will be many who object for understandable reasons, the government led by Prime Minister Netanyahu made a decision based on their commitment to pursuing every avenue that could lead towards meaningful negotiations….We hope that Israel’s very serious concession will be matched with an end to incitement and other measures by the Palestinian Authority.”

Standing alongside Kerry, Indyk said his new role was “a daunting and humbling challenge, but one I cannot desist from.”

“It has been my conviction for 40 years that peace is possible,” Indyk said.

Indyk is known for his get-tough-with-Israel approach which, in his view, is the only way to bring about peace in the region.

Indyk served twice as ambassador to Israel, first from 1995 to 1997 and later from 2000 to 2001, and currently directs the Brookings Institution’s foreign policy program.