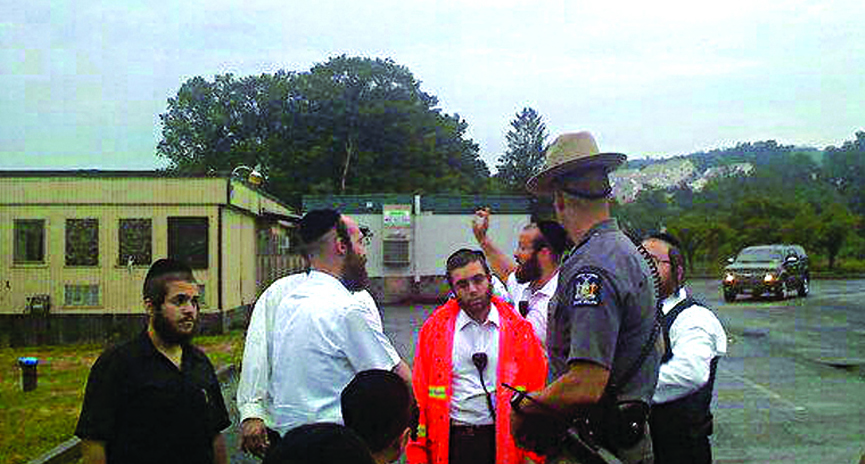 Elation and relief erupted in Kiryas Joel Monday morning as a 10-year-old boy who was in the village for a visit was discovered safe and sound, b’chasdei Hashem, in a forest behind the village’s girls’ school, minutes after hundreds of volunteers mobilized for a second day of searching in the forests surrounding the community.

The searchers were warned by family members that Shimon, who had previously run off, would likely flee if found.

Indeed, as a state trooper noticed a young boy in the forest behind the V’Yoel Moshe girls’ school at about 9:30 a.m. who fit the boy’s description, the child tried to run away. The trooper ran after him and caught him, bringing an end to a nerve-racking 18-hour period, during which countless tefillos were uttered by friends and strangers for  Shimon ben Raizel Devorah. who lives in Williamsburg but was in Kiryas Joel with his parents to visit his grandparents, was last seen on Lizensk Boulevard at about 5:00 p.m. Sunday. His parents grew alarmed when he disappeared shortly afterward.

Spurred by the pleas of the family, hundreds of volunteers from surrounding camps and from Kiryas Yoel had scoured the area where he was last seen with the Kiryas Joel Shomrim setting up a mobile command center and helicopters directing the rescue operation. Signs with Shimon’s picture were hung prominently across the area.

The volunteers suspended searching in the forests when it got late at night, intending to resume Monday morning.

The search parties set out again at 9:00 a.m. Monday, and were told the good news shortly afterward.

Shimon was taken to Westchester Medical Center for a checkup but is said to be doing fine.