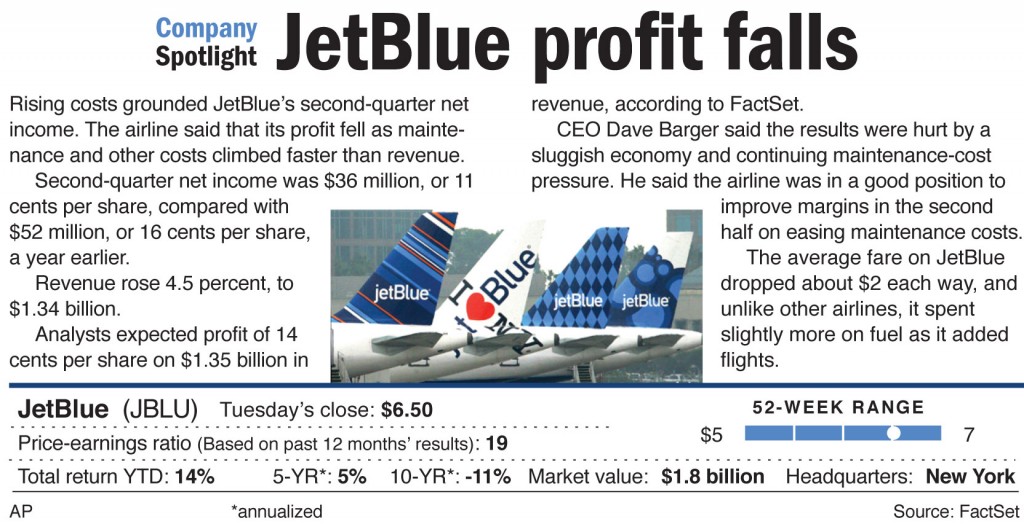 CEO Dave Barger said the results were hurt by a sluggish economy and continued heavy spending to maintain the General Electric Co. engines on its 100-seat E190 jets made by Embraer.

Maintenance spending jumped 31 percent from a year ago, an extra $26 million that accounted for nearly one-third of the airline’s total increase in costs. The extra maintenance spending exceeded JetBlue’s profit decline. Barger said that JetBlue was in a good position to improve margins in the second half as maintenance costs eased.

The average fare on JetBlue dropped about $2 each way, and unlike other airlines, it spent slightly more on fuel as it added flights.

Analysts expected profit of 14 cents per share on $1.35 billion in revenue, according to FactSet.

The airline boosted traffic by 7.3 percent, but it increased passenger-carrying capacity even faster, by 7.8 percent, as it added flights.

Passenger revenue for every mile flown by each seat — a closely watched figure in the airline business — declined by 3.3 percent.

Airline officials said they were disappointed in the decline in the key figure, but expected it to improve in the second half. They said that they were encouraged by recent trends, including efforts to attract and keep higher-fare customers.

The airline said third-quarter costs per mile are likely to rise by 1 to 3 percent. The increase will be 3 to 5 percent excluding fuel and profit sharing, and capacity will increase over last year’s levels, the company said.

J.P. Morgan analyst Jamie Baker called the second-quarter results “largely underwhelming.” He said JetBlue’s one-year decline in operating margin was the worst of any U.S. airline that he follows.

Cowen and Co. analyst Helane Becker wrote to clients that JetBlue’s non-fuel costs per mile “continue to be a sticking point for the company, and we do not expect that to change in 2014,” citing negotiations on a new contract with union pilots.

Both analysts slightly lowered their estimates of second-half JetBlue profit.