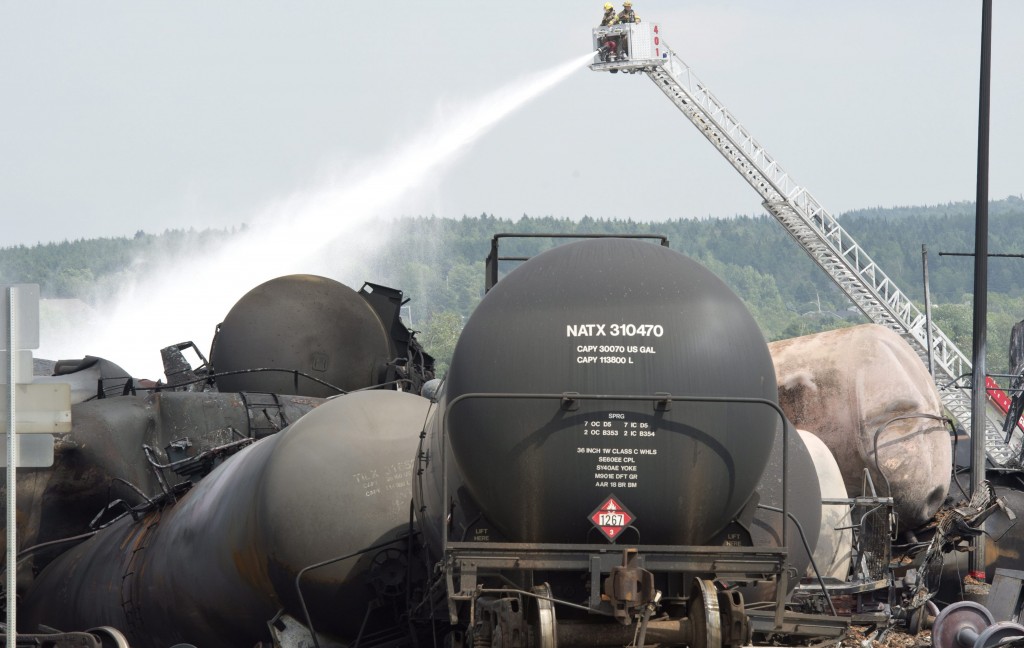 The oil industry and U.S railroads are resisting the Obama administration’s attempt to boost safety standards for the type of rail car involved in a fiery, fatal explosion in Canada, citing costs and technical challenges.

Industry groups say it is impractical to retrofit tens of thousands of existing tank cars used to haul oil, even as they have adopted voluntary standards to ensure that cars ordered after October 2011 meet tough requirements recommended by federal transportation experts following a deadly ethanol train derailment and explosion in Illinois two years earlier.

A proposed rule to beef up rail-car safety was initially scheduled to be put in place last October, but it has been delayed until late September at the earliest. Officials blamed the delay on the time it has taken to seek and review petitions from industry groups and the public. A final rule isn’t expected until next year.

The agency is considering a plan intended to fix a dangerous design flaw in a rail car commonly used to haul oil and other hazardous liquids from coast to coast. The soda-can-shaped car, known as the DOT-111, has come under scrutiny from safety experts because of its tendency to split open during derailments and other major accidents.

Defects in the car’s structure were noted as far back as 1991.

The rail industry estimates that retrofitting older cars would cost at least $1 billion, not including lost-service time for cars removed from the fleet for repairs. “By comparison, derailment costs totaled approximately $64 million over the past five years,” the Association of American Railroads said in a 2011 petition to the federal government. Extra weight from retrofitting cars might even cause overloads, potentially making them less safe, the group said.

Officials from an Illinois town near the site of a 2009 ethanol-train derailment call the railroads’ stance illogical.

Changing federal rules to impose safety standards for new tank cars without requiring a retrofit of existing cars “will provide no real protection to the general public in derailment situations for decades to come,” the village of Barrington, Ill. said in testimony submitted to the U.S. Pipeline and Hazardous Materials Safety Administration.

An unattended Montreal, Maine & Atlantic Railway train came loose July 6 and hurtled down a 7-mile incline before derailing and igniting in Lac-Megantic, near the Maine border. The fiery explosion killed at least 47 people.

Seventy-two of the train’s 73 cars were carrying crude oil, and at least five exploded, setting off massive explosions that devastated the small lakeside town of 6,000 people. The cars were the DOT-111 model.

The derailment and resulting explosion are under investigation. It’s unclear whether retrofitted cars would have been able to withstand the impact. Still, transportation experts say the car’s underlying design makes it prone to damage and catastrophic loss of hazardous materials.

The pipeline-safety agency said in a report this month that the delay was needed to allow “additional coordination” among officials and interested groups, including rail- and oil-industry representatives, who have lobbied against a rule-change for existing cars.

In comments submitted to the pipeline-safety agency, industry groups asked the Obama administration to focus its rule-making on cars built after October 2011.

Much of that increase is from oil produced in the Bakken oil patch in North Dakota and surrounding areas. The train that crashed in Quebec was carrying oil from North Dakota to a refinery in New Brunswick, Canada.

The Associated Press reported in September that the DOT-111 tank car had been allowed to haul hazardous liquids from coast to coast even though transportation officials were aware of the design flaw. The AP reviewed 20 years of federal rail-accident data involving DOT-111 cars used to haul ethanol, and found that the cars had been breached in at least 40 serious accidents since 2000. In the previous decade, there were just two breaches.

Sen. Charles Schumer, D-N.Y., is urging the Obama administration to phase out DOT-111 tank cars or require freight rail carriers to retrofit them to prevent potential explosions or spills.

While freight rail should not be “demonized,” increased traffic of rail cars carrying crude oil “warrants increased safety measures, and that begins with putting the safest, most up-to-date tank cars on the tracks,” Schumer said at a news conference last week in Albany, N.Y.

Democratic Reps. Mike Michaud and Chellie Pingree of Maine said the government should conduct a wide-ranging safety review as transportation of oil by train increases. The train that derailed in Quebec was scheduled to cross Maine on its way to a refinery in St. John, New Brunswick.

A spokeswoman for the Association of American Railroads, which represents the rail industry, said the group shares Schumer’s belief in putting safety first.

“If safer and better DOT-111s can be had, then it makes good sense to ensure that the design and standards that these cars are built to must be tougher than the federal standards that exist today,” said spokeswoman Patricia Reilly.

Reilly said the industry adopted voluntary standards ensuring that all DOT-111s ordered after October 2011 meet tough requirements recommended by the NTSB after the 2009 crash outside Rockford, Ill., which killed a woman and injured 11 others.

But those voluntary standards do not apply to an estimated 40,000 cars built before October 2011 that carry oil, ethanol and other flammable liquids.

The industry’s proposal “ignores the safety risks posed by the current fleet,” the NTSB said in a report on safety recommendations last year. Older tank cars “can almost always be expected to breach in derailments that involve pileups or multiple car-to-car impacts,” the report said.

The NTSB cited the car’s “inadequate design” in the 2009 crash.

The DOT-111 car’s steel shell is too thin to resist puncture in accidents, the NTSB said, and the ends of the car are vulnerable to ruptures. Valves used for unloading, and other exposed fittings on the tops of the tankers, can also break during rollovers.

The railroads group said about half of the tank cars used to transport oil today meet the higher safety standards.

“Industry is out ahead of regulations,” Delcambre said. “They’re moving forward, which is good.”