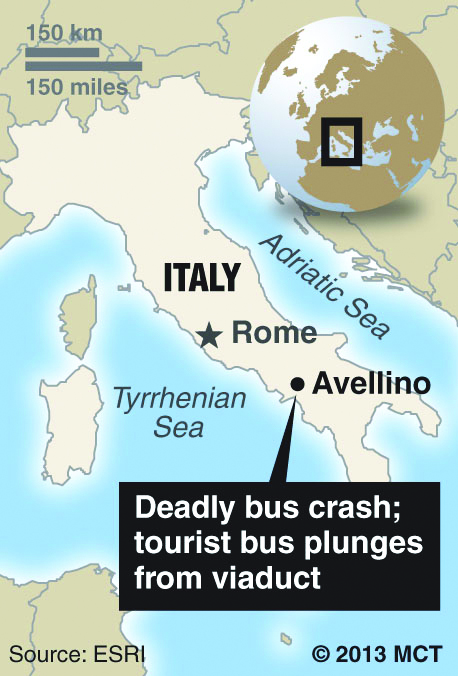 An Italian tour bus plowed through cars, crashed through the side wall of a highway bridge and plunged into a ravine, killing at least 38 people, authorities said Monday.

Rescuers wielding electric saws cut through the twisted wreckage of the bus looking for survivors overnight, and state radio quoted a local police chief as saying the bus driver was among the dead.

The bus lost control near the town of Monteforte Irpino in Irpinia, a largely agricultural area about 60 kilometers (40 miles) inland from Naples and about 250 kilometers (160 miles) south of Rome, hitting several cars before plunging some 30 meters (100 feet) off a viaduct on Sunday night.

It was not immediately clear why the bus driver lost control of the vehicle, but prosecutors were investigating technical problems.

Italy’s Prime Minister Enrico Letta described the crash as a “dramatic moment” for his entire country.

“We are deeply pained by this tragedy that has touched many families and many children,” Letta said from Athens, where he met with Greek Prime Minister Antonis Samaras.

A reporter for Naples daily Il Mattino, Giuseppe Crimaldi, told Sky TG24 News Channel from the scene that some witnesses told him the bus had been going at a “normal” speed on the downhill stretch of the highway when it suddenly veered and started hitting cars. Some witnesses thought they heard a noise as if the bus had blown a tire.

“All possible causes are under examination. It could be a combination of causes,” Avellino Highway Police Chief Salvatore Imparato said on Sky TG24.