Stocks Decline As a Busy Week For Markets Begins 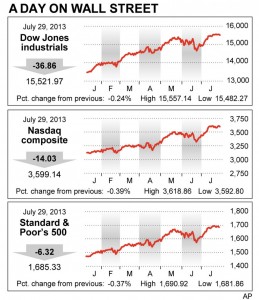 A blistering July rally on the stock market appears to be fading.

Stocks edged lower Monday as investors waited for a series of major economic reports due out this week. A string of big-name merger deals wasn’t enough to push indexes higher.

On Wednesday the government will report its first estimate of U.S. economic growth for the second quarter, and on Friday it will publish its monthly jobs survey.

Both reports will give investors a better idea about the strength of the economy and what’s next for the Federal Reserve’s stimulus program. Investors will hear from the Fed on Wednesday after the central bank winds up a two-day policy meeting. The Fed’s stimulus has been a major factor supporting a four-year rally in stocks.

Seven of the 10 sectors in the index fell. The declines were led by energy companies and banks.

The benchmark index is still up 4.9 percent in July, and the S&P 500 is on track to have its best month since January. The index jumped this month, climbing to an all-time high July 22, after Fed Chairman Ben Bernanke assured investors that the Fed wouldncut its stimulus before the economy was ready. The central bank is buying $85 billion a month to help keep interest rates low and encourage borrowing and hiring.

The stock closed higher even after Interpublic CEO Michael Roth said that he saw no need for a major merger to keep the company moving forward.

The deals should be positive for the stock market in the long run, and should be followed by more merger activity, said Dan Veru, chief investment officer at Palisade Capital Management. Companies are sitting on record cash balances and borrowing costs, though rising, are still close to record lows.

“Companies are struggling to grow organically,” said Veru. “So, how do they grow? They grow by buying other businesses.”

Investors will also be focusing on corporate earnings this week.

Just over half of the companies in the S&P 500 index have reported earnings for the second quarter. Analysts are currently forecasting earnings growth of 4 percent for the April-through-June period, according to S&P Capital IQ. That’s the slowest rate of growth in three quarters.

In government bond trading, the yield on the 10-year Treasury note rose to 2.59 percent from 2.56 percent Friday. The note’s yield, which moves inversely to its price, has climbed almost 1 percentage point since the start of May, when it hit its low point of the year, 1.63 percent.

The number of Americans who signed contracts to buy homes dipped in June from a six-year high in May, the National Association of Realtors said Monday. The slight decline suggests higher mortgage rates may be starting to slow sales.

— CF Industries rose $21.30, or 12 percent, to $202.30 after reports that Third Point, the hedge fund of the activist investor Daniel Loeb, had bought a stake in the company. Loeb disclosed the purchase in a quarterly letter to investors.

This article appeared in print on page 8 of the July 30th, 2013 edition of Hamodia.