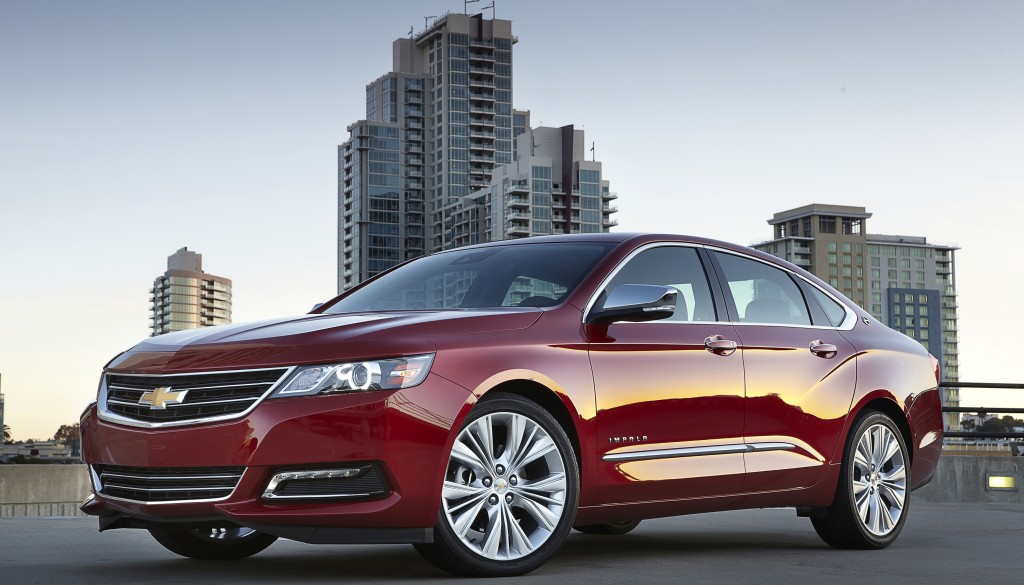 The magazine has ranked the completely reworked 2014 version of the full-size car as its top U.S. sedan, based on ride, handling, quality of materials and other factors. It’s the first time in two decades that a domestic brand has beaten cars from Germany and Japan.

For the Impala, it’s quite a comeback. The previous version of the car was more commonly found on rental car lots than in suburban garages. Even longtime Impala fans didn’t want one. Three years ago, Consumer Reports described the car’s ride as “unsettled” and “nervous.”

The redesigned Impala, which began arriving at dealers in April, scored 95 out of 100 points in the magazine’s testing to get an “Excellent” rating. That put it ahead of traditional large car competitors like the Toyota Avalon and Chrysler 300. The Impala even outscored high-end luxury sedans such as the Audi A6 and Lexus LS460.

Owners of those luxury cars may wonder if the magazine’s testers got the cars mixed up.

“We’re going to have to have everyone withhold their judgment until they drive one,” said Jake Fisher, chief auto tester at Consumer Reports.

The Impala’s performance is another sign of the three Detroit automakers’ renaissance, Fisher said. All three companies nearly collapsed into financial ruin four years ago, partly because of their reputation for shoddy cars.

The Impala, made by General Motors, surprised the magazine’s auto testers with its agility, braking, paint and interior quality, and quiet, roomy cabin, Fisher said. Its score was 32 points higher than the previous model, a utilitarian car last redesigned in 2005 that was sold mainly to rental car companies.

“It really doesn’t fall down in any area, and it does a lot of things really well,” Fisher said of the 2014 version. “The car rides better than a Lexus ES. It’s quieter than many luxury cars. It’s extremely roomy.” He even said the Impala “accelerates and brakes better than, say, a Volkswagen GTI,” a high-performance compact that is a favorite of small-car gearheads.

In addition, the Impala’s interior controls, including its electronics, are simple and easy to use. Problems with complex electronics have sunk many a luxury car in the magazine’s testing, including the Cadillac XTS, which shares the same underpinnings as the Impala, Fisher said.

Although the Impala isn’t considered a sports car, only high-performance sports sedans from Germany, like the BMW M Series, handle better, he said.

At the National Impala Association’s annual convention that’s going on now in Spearfish, S.D., the new Impala is the hot topic in the parking lot, as 175 members compare their restored classic Impalas and other Chevys sold from 1958 to 1970, said Mike Berry, the club’s president.

“Everybody was excited about it,” he said, adding that he was “just blown away” when he sat in a member’s 2014 Impala Wednesday night. He said he’ll buy one as his next car.

The craftsmanship of the new car is reminiscent of the classic older Impalas, said Berry, 61, of Atlantic Highlands, N.J. “It’s a car that people are impressed by. The appearance. The fit-and-finish of the interior is light years ahead of what it was.”

Still, the Impala won’t get Consumer Reports’ coveted “Recommended Buy” rating for quality and reliability, at least not yet. That’s because the car is too new for the magazine to have reliability data. That data could come from surveys gathered between now and the fall, when Consumer Reports unveils its annual automobile issue.

The Impala is also too new to have much of an impact on Chevrolet sales. For the first half of the year, GM sold just over 83,000 Impalas, down 15 percent from the first six months of last year. GM is hoping the redesigned car will revive the full-size segment, where sales have been falling for years due largely to old models that had not been updated.

The old Impala, which will live on as a car sold to rental car companies and other bulk buyers, was last redesigned in 2005. In its last review of the old model published in 2010, Consumer Reports said it was noisy and behind the times, and its outdated V-6 engine was slower than some cars with smaller four-cylinder motors.

“Handling is clumsy and powertrain refinement falls short,” the magazine wrote. “There are frequent small rocking and bobbing motions, making the car feel unsettled. The highway ride is a little nervous.”

Even Impala fans had trouble loving the previous model, Berry said. “The old ones just weren’t very impressive,” he said. “They were OK for a rental car, but I wouldn’t buy one.”