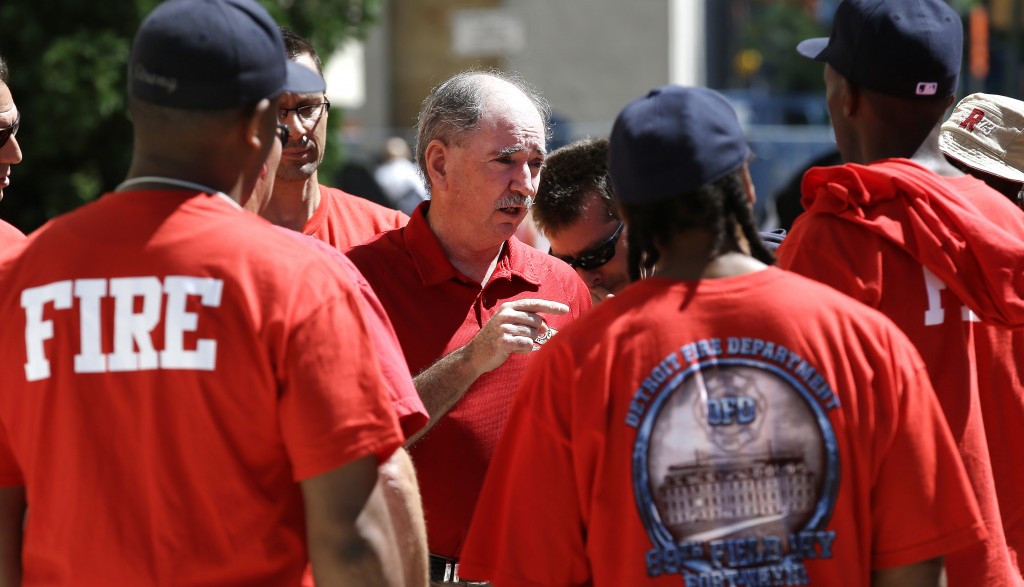 Detroit’s historic bankruptcy filing is a major setback for public employee unions that have spent years trying to ward off cuts to the pensions of millions of government workers around the country.

If the city’s gambit succeeds, it could jeopardize an important bargaining tool for unions, which often have deferred higher wages in favor of more generous pensions and health benefits.

It also could embolden other financially troubled cities dealing with pension shortfalls to consider bankruptcy, or at least take a harder line with their unions in negotiating cuts.

“This is essentially the union’s worst nightmare,” said Gary Chaison, professor of industrial relations at Clark University in Worcester, Mass. “It means that the most sacred of sacred things they’ve negotiated for, the pensions of their retired members, are going to be severely cut.”

Detroit’s bankruptcy filing comes on the heels of some public unions losing most of their collective bargaining rights in Wisconsin. At the same time, the unions have shed thousands of members as state and local governments shrink public payrolls. The crisis of underfunded public pensions could further erode union clout.

Unlike private employers that must fund such defined benefit pensions under the Employee Retirement Security Act, government employers are not covered by that statute. As a result, many elected officials approved such plans, leaving the financial consequences for future leaders to handle.

If cities such as Detroit can use bankruptcy or other tactics to reduce pension obligations, government employees could become less interested in union membership, said Charles Craver, a George Washington University law professor specializing in labor relations. That would be another dose of bad news for the steadily shrinking labor movement, especially because public employees now make up over half of all union members.

“Union leaders should go to the bargaining table and try to address this issue through negotiations, but they fear being thrown out of office if they agree to any cutbacks,” Craver said, referring to pensions.

Detroit’s financial woes were aggravated by widespread corruption, financial mismanagement, the auto industry collapse and a dramatically shrunken tax base as people moved out. The city has long-term debts of at least $18 billion, including $3.5 billion in unfunded pensions and $5.7 billion in underfunded health benefits for about 21,000 retired workers. The rest is owed to bondholders and other unsecured creditors.

About 7.3 million government workers belong to a union. The union membership rate for public sector workers is about 40 percent, much higher than the 6.6 percent rate in the private sector.

The fallout from Detroit could lead to more acrimonious contract negotiations between cities and unions, said John Beck, a professor of labor relations at Michigan State University.

“If I’m a union and bargaining, where I used to be willing to defer wages in form of pensions, I’m going to bargain for what I can get right now because I can’t be sure whether those future wages are going to be protected,” Beck said.

Unions, led by the American Federation of State, County and Municipal Employees, have launched a furious legal challenge to Detroit’s bankruptcy petition, arguing that Michigan’s constitution does not allow public pension obligations to be diminished. But a federal bankruptcy judge dealt a blow to that tactic last week, halting any state lawsuits that would interfere with the bankruptcy proceeding.

“Government entities declaring bankruptcy, it’s really a government going to war with its own people,” said Steven Kreisberg, director of collective bargaining for AFSCME. He said trying to reduce pensions is unfair to those who worked for years in good faith and expected to depend on those benefits in old age.

While other cities in financial trouble might be willing to follow Detroit’s lead, Kreisberg said the stigma of bankruptcy and its long-term damage to a city’s financial future make that unlikely. But if there is a national epidemic of pension defaults, it could change what unions would demand in terms of funding levels.

“We may seek legislation to guarantee that employers are making their payments,” Kreisberg said.

The AFL-CIO has called on President Barack Obama and Congress to offer immediate financial aid to Detroit. The labor federation also wants any federal aid to be matched by the state of Michigan.

“As the nation emerges from the worst of the Great Recession, it is time for Congress and the White House to make it clear they will not turn their backs on our urban centers,” said Lee Saunders, president of AFSCME and chairman of the AFL-CIO’s political committee.

But the White House appears reluctant to intervene. White House spokesman Jay Carney has said the city’s insolvency should be resolved by local leaders and creditors, and that the Obama administration has no plans to provide a federal bailout.

Carney said the administration was ready to provide other forms of assistance, such as investment opportunities or help for blighted neighborhoods hit hard by the recession.