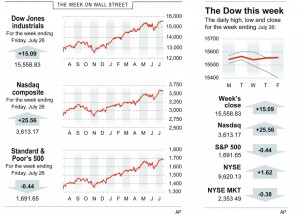 A mixed batch of earnings results gave investors little direction on Friday as traders began looking ahead to a packed schedule next week.

The stock market slumped in early trading, climbed steadily the rest of the day, then ended little changed.

Volume was thin as traders prepared for a deluge of potentially market-moving events next week: a Federal Reserve meeting, the government’s monthly employment report and much more.

“Traders seem to be erring on the side of caution today,” said Jeffrey Kleintop, the chief market strategist for LPL Financial.

It’s halftime in the second-quarter earnings season, and corporate profits are shaping up better than some had feared.

Analysts forecast that earnings for companies in the S&P 500 increased 4.5 percent over the same period in 2012, according to S&P Capital IQ. At the start of July, they predicted earnings would rise 2.8 percent. Nearly seven out of every 10 companies have surpassed Wall Street’s profit targets.

The results aren’t exactly impressive, said Sam Stovall, the chief equity strategist at S&P Capital IQ. Investors often argue that analysts set the bar for earnings so low that most companies are bound to jump over it. On average, more than six of every 10 companies beat Wall Street’s targets every quarter.

The stock market hasn’t ended the week with a loss since June 21, when speculation that the Federal Reserve would start easing off its support for the economy rattled financial markets.

Kleintop cautioned against reading too much into the market’s moves on Friday or the weekly loss. The S&P 500 is still up 5.3 percent for the month and 18.6 percent for the year.

“It’s just one week down after four up,” he said. “If the market just goes higher and higher week after week, you would see a major swoon when it runs into some disappointing news.”

In the market for U.S. government bonds, the yield on the benchmark 10-year Treasury note slipped to 2.56 percent from 2.57 percent late Thursday.

Long-term interest rates have swung in a wide range since early May as traders attempt to anticipate the Fed’s next move. The yield on the 10-year note went as low as 1.63 percent on May 1 and as high as 2.74 percent on July 5.

This article appeared in print on page 8 of the July 29th, 2013 edition of Hamodia.