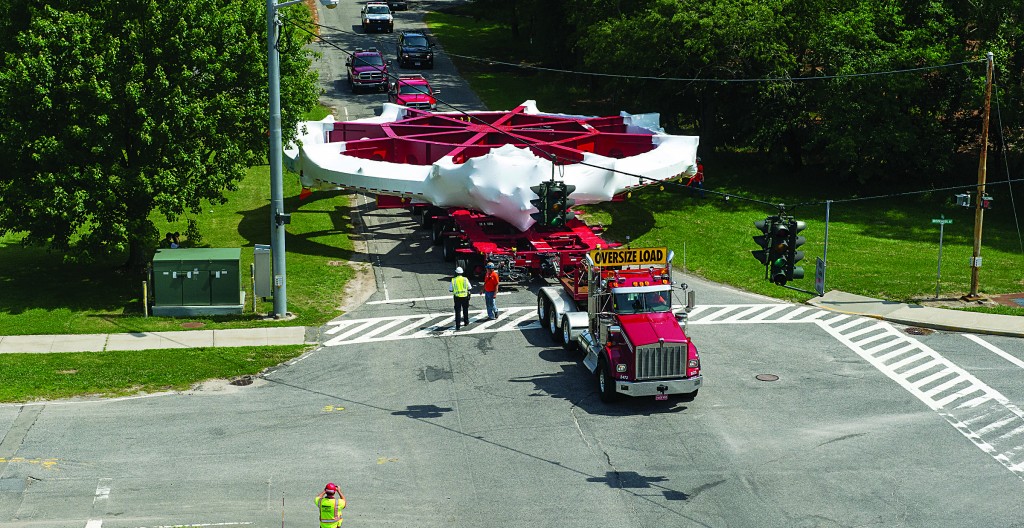 It skipped tolls. It had a GPS tracker. It even posed for photos with admirers.

The 50-foot-wide, 15-ton electromagnet attracted a sensation wherever it went during its slow, delicate 3,200-mile journey from New York to suburban Chicago. The land-and-sea trip culminated when scientists threw a big welcome for the mysterious shrink-wrapped cargo on Friday as it arrived at the Fermi National Accelerator Laboratory to help study blazing-fast particles.

“‘Oh look, they found a flying saucer!’” retired software developer Chris Otis recalled thinking when he saw the massive disc-shaped device when it made a pit-stop in a Costco parking lot.

“I figure somebody at Fermilab is going to plug the thing in, turn it on, and my watch is going to stop running, everybody’s hearing aides are going to sail across the room,” Otis said with a laugh. “I have no idea. Turn it on and the Martians will hone in on it.”

It started its trip in late June, floating by barge down the East Coast into the Gulf of Mexico, where it outran a tropical depression, then up the Mississippi River, where it was photographed drifting past the St. Louis arch on its way into Illinois.

Just south of Chicago, it was hauled out of the water and strapped onto a specially made 16-axel flatbed truck for its final leg. It traveled at a mere 5 to 15 mph, with a behemoth bumper sticker informing puzzled onlookers that it was “driving discovery in particle physics.”

“We’ve been assured that we don’t have to pay tolls, but we’re waiting to see if we get the violation notice in the mail. It’d be pretty hard to dispute,” said Fermilab spokesman Andre Salles.

It was a night owl that traveled after dark when roads weren’t as crowded, staging during the day at a Costco parking lot. As word spread, thousands of people came out to watch it inch along. Some sat in lawn chairs. News helicopters swirled overhead.

With a police escort, it finally rolled into the suburban Chicago lab shortly after 4 a.m. Friday with an “oversize load” sign and a waving American flag.