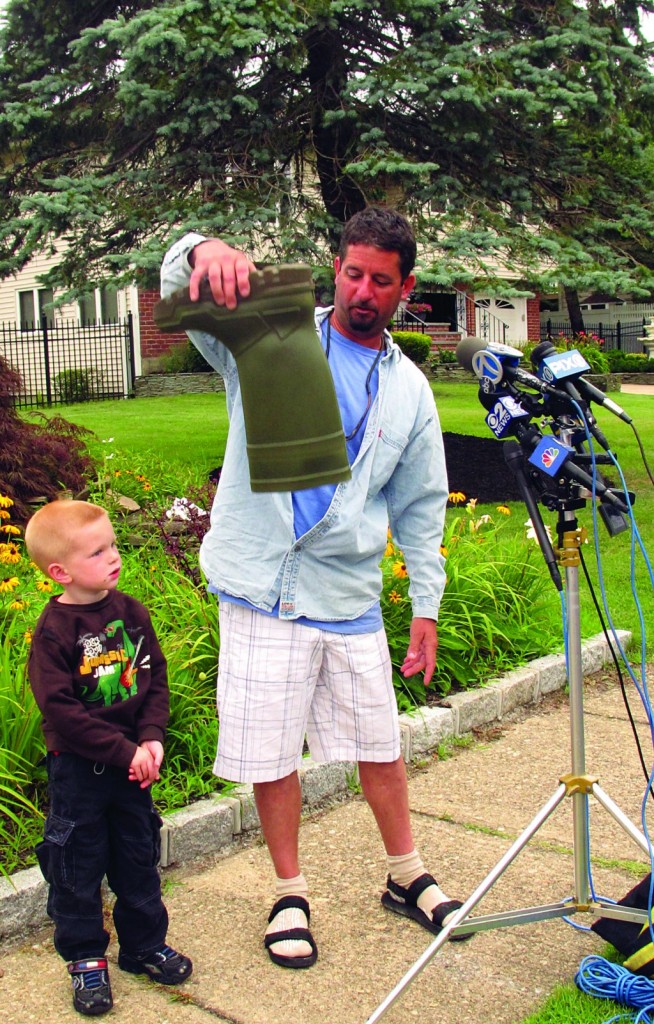 A Long Island fisherman who spent 12 hours floating in the Atlantic Ocean after falling off his boat joked Thursday that he may have the two rubber boots that kept him afloat bronzed.

John Aldridge was rescued a day earlier when the Coast Guard found him floating in the ocean off Montauk Point, about 40 miles from where he tumbled off the 44-foot lobster boat Anna Mary at about 3 in the morning.

Aldridge, 45, was treated at a hospital in Falmouth, Mass., for dehydration, exposure and hypothermia, and was released Thursday morning. Relatives drove him back to Long Island, where he arrived in midafternoon to hugs from his parents and relatives, including young nephew Jake, who peppered him with questions about his experience.

“Shot” is how Aldridge described his overall condition, noting he had yet to get much sleep. He said he was preparing for a day of fishing when he attempted to move a beverage cooler.

“The handle broke off and I fell off the back of the boat. Just like that,” he said. “I just watched the boat float away.”

Aldridge said while he had read books and articles about survival techniques, instincts really took over. He noticed his calf-length rubber boots were allowing his feet to float higher in the water than his head, so he took off the boots, turned them upside down and filled them with air. He placed one under each arm and used them as flotation devices.

“Once I did that, I was good to go,” he said. “The water was warm, my head was above water, so I was floating, and I knew I had to conserve energy … and that was it. I floated for hours.”

He was able to see other boats in the area looking for him and noticed planes and helicopters overhead, but he just drifted for hours, he said.

“I saw everybody looking for me, and no one saw me,” he said.

About midafternoon Wednesday, he noticed a Coast Guard jet flying overhead; about 30 minutes later, a Coast Guard helicopter was hovering, and soon a swimmer was in the water helping him.

While he was adrift, he said, his thoughts were of family and friends back home.

“I was like, ‘There’s no way I’m dying this way.’ I was like, ‘This is how I gotta go? No way,’” Aldridge said. “So I just put my head to thinking survival mode and I wasn’t dying that way. Dying wasn’t an option.”

His father, John Aldridge Sr., joked to his son not to reveal the brand name on the boots to reporters: “Not until we get a contract offer.”