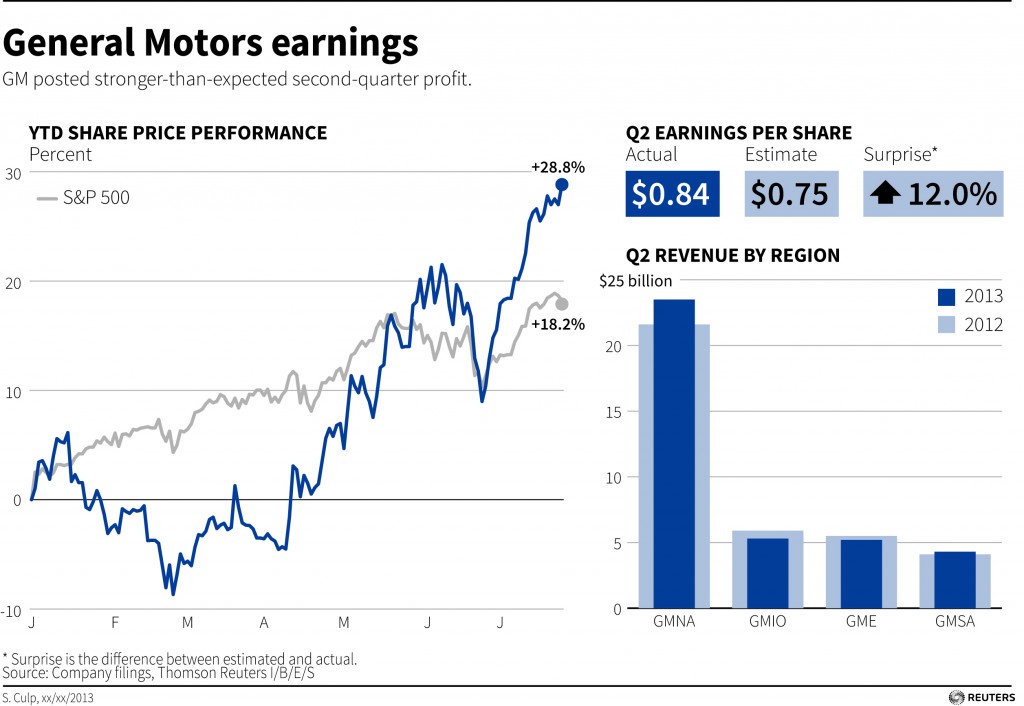 Just as General Motors is getting a handle on its troubles in Europe, the automaker faces a new challenge in another part of the globe.

GM says Japanese automakers are using the weak yen to cut prices in Southeast Asia and Australia, taking a bite out of GM’s profits there. Sales tailed off in India as well.

A subpar second-quarter performance in the company’s International Operations division pulled GM’s overall profit down 16 percent from last year, offsetting gains in North America and a stark improvement in Europe.

The Detroit automaker earned $1.26 billion from April through June, or 75 cents per share. That’s down from $1.5 billion, or 90 cents per share, a year ago.

Still, GM handily beat Wall Street predictions when one-time items were excluded. On that basis, GM earned 84 cents per share in the quarter, nine cents better than the forecast of analysts surveyed by FactSet.

Pickups are GM’s top-selling vehicles, and they bring in an estimated profit of $10,000 apiece.

Chief financial officer Dan Ammann said he expected improved performance in the second half as GM gets the full benefit of rolling out the new trucks, as well as the 2014 Chevy Corvette sports car, an all-new Cadillac CTS sedan and other new models.

“That’s going to give us a good tail wind into the second half,” he said.

But Ammann also described headwinds in Asia-Pacific countries outside of China. He said Japanese rivals used a weaker yen to cut prices, forcing GM to respond in kind, lowering its profits.

The Japanese yen has been falling against other currencies, making goods from Japan less expensive when sold in other countries. Ammann said Japanese automakers supply much of the Asia-Pacific region from Japan.

GM expects the trend to continue, and is trying to counteract it with new products and other unspecified actions, Ammann said.

Weakness in auto markets in India and Russia also contributed to the decline in international profits. Market conditions accounted for more than half of the drop in profit. Another chunk was warranty and recall costs. Ammann said the recall costs have continued into the current quarter.

The International Operations numbers troubled some industry analysts who were otherwise impressed with GM’s performance.

“The GMIO headwinds indicate that GM’s ex-China operations may remain challenged for some time,” Barclays analyst Brian Johnson wrote in a note to investors.

Morgan Stanley analyst Adam Jonas said in an interview that it’s too early to tell if International Operations will remain a trouble spot for GM. He doesn’t think GM will soon repeat the $600 million profit from the region a year ago, but the $200 million from this quarter is too low. He expects profit to level off in the $400 million range.

The fact that problems flared up just as it appeared that GM was getting Europe under control isn’t a long-term worry for a big international company, he said. “You’re never going to get it all working together at the same time,” he said.

In Europe, GM cut $284 million off its loss from last year, narrowing it to $110 million as cost-cuts kicked in and new products such as the Opel Mokka small crossover SUV and Adam subcompact car sold well, Ammann told reporters.

Ammann said GM’s year-over-year performance in Europe should improve as cost cuts and more new products take hold, but the second half might worsen due to a normal seasonal slowdown.

“The things that we control we feel very good about,” Ammann said. “Obviously, what we don’t control is the European macro environment. That remains very challenging, but we’re making good progress despite that.”

GM has said it expects to break even in Europe by the middle of the decade. Ammann wouldn’t provide further guidance.