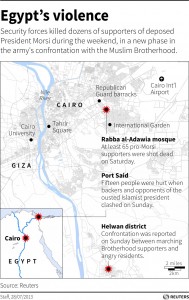 Deadly clashes broke out during funerals of slain supporters of Egypt’s ousted Islamist president Sunday as the supreme leader of the Muslim Brotherhood urged his followers to stand fast after more than 80 of them were killed in weekend violence.

Setting the stage for more confrontation, the military-installed interim president gave the prime minister the power to grant the military the right to arrest civilians in what government officials said could be a prelude to a major crackdown on Mohammed Morsi’s supporters or Islamic fighters who have stepped up attacks against security forces in the Sinai Peninsula.

The extent of the bloodshed has dashed hopes of reconciliation between the country’s two camps, sharply divided over the July 3 military coup that removed Egypt’s first freely elected president following protests by millions of Egyptians demanding he step down.

Islamists staunchly reject the new leadership and insist the only possible solution to the crisis is to reinstate Morsi. Meanwhile, the interim leadership is pushing ahead with a fast-track transition plan to return to a democratically elected government by early next year.

Egypt’s interior minister, who is in charge of the police, also pledged to deal decisively with any attempts to destabilize the country, a thinly veiled warning to Morsi supporters occupying two squares in Cairo in a monthlong stand-off with security forces.

Secretary of State John Kerry issued a strongly worded statement on Saturday, saying he told Egyptian authorities it is “essential” they respect the right to peaceful protest.

The worst bout of violence since Morsi’s ouster took place before dawn on Saturday when police and armed men in civilian clothes opened fire on his supporters as they sought to expand their sit-in camp by moving onto a nearby main boulevard.

Khaled el-Khateeb, head of the Health Ministry’s emergency and intensive-care department, said Sunday the death toll from the violence stood at 80. An official at Cairo’s main morgue, however, put the toll at 83.

Authorities conceded that the vast majority of those killed in Cairo were demonstrators, but the Interior Ministry said some policemen also were wounded as the military-backed administration sought to defend the bloodshed.

Officials from Morsi’s Brotherhood and their allies decried what they called a new “massacre” against their side.

This article appeared in print on page 1 of the July 29th, 2013 edition of Hamodia.