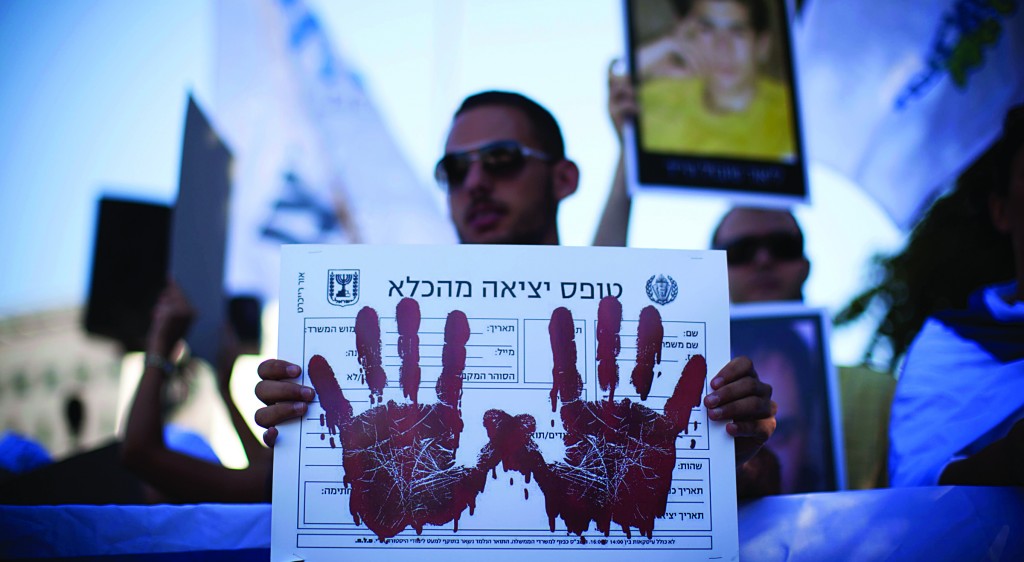 Prime Minister Binyamin Netanyahu gained backing on Sunday from a split Cabinet and despite overwhelming public opposition for a mass release of terrorists from Israeli prisons to facilitate peace talks with the Palestinians.

Netanyahu’s oft-repeated policy that Israel would not accept preconditions to negotiations with the Palestinians seemed to evaporate under relentless American pressure as the ministers agreed by a vote of 13 to 7, with 2 abstentions, to give in to demands for the freeing of 104 terrorists, many convicted of the most heinous acts.

The Cabinet vote, which followed some six hours of debate, had been preceded by intense maneuvering and shifting of positions. The meeting itself was delayed for over an hour Sunday morning as Netanyahu sought to secure enough support to carry the measure over resistance within his own Likud party, according to media reports.

The behind-closed-doors drama included “an insider’s debate among the ministers” over historical precedent. “It was argued that former prime ministers Menachem Begin, Yitzchak Shamir, Yitzhak Rabin and Ariel Sharon all freed terrorists. But the counterargument was that they did so in exchange for Israeli prisoners, not as a fee in a diplomatic maneuver,” wrote senior commentator Dan Margalit in Yisrael Hayom.

Netanyahu reportedly promised U.S. Secretary of State John Kerry that he would deliver on the issue. On Friday, Palestinian Authority President Mahmoud Abbas told Palestinians they could expect a “pleasant surprise” on Sunday.

It was “extremely difficult,” said Netanyahu, and it “pains the bereaved families [of the victims], it pains the entire Israeli public and it pains me very much. It clashes with a foundational value — justice.”

Nevertheless, he justified it on the basis of facilitating peace talks, even while acknowledging the great uncertainty that such talks will yield results.

“I believe that it is important for the state of Israel to enter a diplomatic process that will continue for at least nine months, in order to check if it is possible to reach an agreement with the Palestinians during this time.”

Netanyahu addressed the unpopularity of the decision in an open letter to the Israeli public on Sunday, in which he said that “from time to time, prime ministers are called on to make decisions that go against public opinion — when the matter is important for the country.”

A Smith Research poll published last week said that 88 percent of Jewish Israelis are against releasing the prisoners as a goodwill gesture for peace. The religious public was over 95 percent opposed, while secular respondents polled 80 percent opposed.

Also at issue was the number of prisoners involved in the deal. Israel Radio reported that Netanyahu decided to raise the number from 82 to 104 after the Palestinians threatened not to attend the opening session of talks in Washington next week if Israel did not do so.

The 22 prisoners were added in response to American pressure last Wednesday night at 3 a.m., according to Margalit.

In his efforts to persuade the ministers to go along, Netanyahu promised, “Any provocation on the part of the Palestinians will stop the release [of prisoners],” Ynet reported.

Outside the Cabinet meeting, hundreds of Israelis who lost family members in Palestinian terrorist attacks protested the move. Some held up black-and-white placards with images of victims killed by the prisoners to be released. Others had posters emblazoned with red hand prints — the blood on the prisoners’ hands.

“Releasing murderers brings a lot of bereavement and it is a mark of disgrace against Israel. Anyone on the [Palestinian] side who today calls for the release of murderers and burners of children and women does not deserve to be called a partner,” said Bennett.

Bennett told the families, “Terrorists need to be wiped out, not released. We will vote against releasing murderers.”

Deputy Defense Minister Danny Danon (Likud) said that the release of the terrorists constitutes “a prize to terror and a blow to the state’s strength and deterrence.”

“The detestable terrorists will be the summer stars of the Palestinian children,” he said. “They will go from stage to stage, their pictures will hang in the streets, the Palestinian leadership will celebrate with the murderers all night and into the morning. It will enter the negotiating room with us.”

“Pollard didn’t commit murder, and he is still serving a harsh sentence in prison. Just as the Americans guard their honor, so we must guard our national honor and respect the families of the victims,” she said.

“It’s unthinkable that we release prisoners, murderers, terrorists who murdered innocent Israeli citizens, before we even sit down to talk.”

In one of his first official comments since being elected Ashkenazic Chief Rabbi last week, Rabbi David Lau expressed concern on Sunday that “releasing these terrorists will expose Israeli residents to security dangers and will hurt the feelings of the loved ones of those killed by these terrorists,” Arutz Sheva reported.

Perhaps the harshest, most impassioned denunciation of the decision came on Sunday from Frimet Roth, whose daughter Malki was murdered at the age of 15 in the Sbarro restaurant bombing in 2001.

“By returning unrepentant terrorists to their homes, Mr. Netanyahu has also endangered every Israeli and weakened the very foundations of our society.

“This unprincipled man, a crass politician down to his every last cell, has usurped the role of judge and court,” Roth said, referring to the sentences handed down by Israeli courts that will now be shortened.

But the majority of the Cabinet members voted with Netanyahu, even as they expressed sympathy for the victims of terrorism.

Justice Minister Tzipi Livni, who voted for the deal, said on Thursday as the decision neared, “This meeting is one of the most important ones [for] the future of Israel. The decision involves great grief but needs to be made.”

“This is not a happy day for the state of Israel. These people should rot in prison all of their lives, but we need to do what is possible in order to start the peace process,” said Finance Minister Yair Lapid.

Opposition leader Shelly Yachimovich on Sunday urged the ministers to vote in favor of the releases.

“It is a difficult and painful decision, first and foremost to the victims’ families, but it will not damage Israel’s national fortitude and instead will enable the jump-starting of the negotiations,” said Labor chair Yachimovich. “The prime minister must stop being led by the extremist elements of his Cabinet.”

The prime minister also said that a committee to be made up of himself, Defense Minister Moshe Yaalon, Justice Minister Tzipi Livni, Public Security Minister Yitzchak Aharonovitch and Science and Technology Minister Yaakov Perry, a former Shin Bet head, will be established to determine which prisoners will be released and when.

The release is expected to be implemented in phases over a nine-month negotiation period, set to begin Tuesday in Washington at a meeting attended by Justice Minister Tzipi Livni, special envoy Yitzchak Molho and Palestinian negotiator Saeb Erekat.