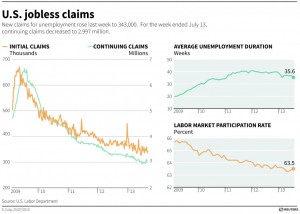 The number of Americans applying for unemployment benefits rose by 7,000 last week, to a seasonally adjusted 343,000.

The increase in the week ending July 20 follows a drop of 22,000 the previous week. But the broader trend is consistent with an improving job market.

The four-week average, which smoothes out weekly fluctuations, fell 1,250 to 345,250, according to the Labor Department.

Weekly applications data can be volatile in July. Automakers typically shut their factories the first two weeks of the month to prepare for new models, leading to temporary layoffs. But this year, much of the industry has skipped or shortened the shutdowns to meet stronger demand.

In June, employers added 195,000 jobs. The unemployment rate stayed at 7.6 percent last month, but is down from 8.2 percent a year earlier.

Job growth has been solid despite lackluster economic growth. Economists expect the economy grew at an annual rate of less than 1 percent in the April-June quarter, even worse than an unimpressive 1.8 percent the first three months of the year. Federal spending cuts that took effect in March have hobbled economic growth.

Many economists are hopeful that steady hiring will help spur faster growth in the second half of the year.

More than 4.8 million Americans were receiving unemployment benefits in the week that ended July 6, the latest for which data is available. That is down nearly 20 percent from 6 million a year earlier.

Some parts of the economy have proven resilient.

The U.S. housing recovery is strengthening, for example. Sales of newly built homes rose 8.3 percent last month to a seasonally adjusted annual rate of 497,000, the Commerce Department said Wednesday. That’s the highest since May 2008, and up from an annual rate of 459,000 in May.

Sales are still below the 700,000 pace consistent with healthy markets. But they are up 38 percent in the past 12 months. That’s the biggest annual gain since January 1992.

New-home sales make up only a small part of the market. But they have an outsized economic impact. Each home built creates an average of three new jobs and generates about $90,000 in tax revenue, according to data from the National Association of Home Builders.