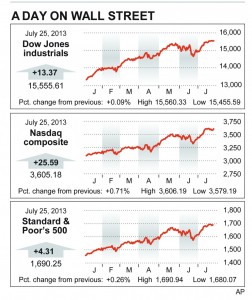 Gains in energy and chemical companies helped nudge the stock market higher Thursday. The modest move extends a pattern seen this week; even with plenty of earnings news from big companies, the broader market has shuffled between minor gains and minor losses.

Nearly halfway through the second-quarter earnings season, the overall trend looks good but not great, said Tyler Vernon, chief investment officer of Biltmore Capital in Princeton, N.J. “There have been some big disappointments, like Caterpillar yesterday, but we’re seeing better and better numbers coming out.”

The Dow Jones industrial average rose 13.37 points, or 0.1 percent, to 15,555.61. The Dow was held back by Home Depot and Caterpillar, which warned Wednesday its sales could sag.

Analysts forecast that companies in the S&P 500 index will report earnings growth of 4.3 percent over the same period last year, according to S&P Capital IQ. At the start of July, the forecast was for growth of 2.8 percent. More than six out of every 10 companies have cleared analysts’ earnings targets so far.

Improving profits should help push the S&P 500 index above 1,700 in the coming weeks, Vernon said.

D.R. Horton, the country’s largest builder, and PulteGroup said orders for new houses jumped in the second quarter, but their results still fell short of what analysts had expected. PulteGroup also posted a 14-percent decline in profits

“I think what you’re seeing a bit of today is people questioning what higher mortgage rates mean for housing,” said JJ Kinahan, chief strategist at TD Ameritrade in Chicago.

In the market for U.S. government bonds, the yield on the 10-year Treasury note was unchanged from late Wednesday at 2.59 percent. Late last week, it was trading at 2.48 percent.

The 10-year yield acts as a benchmark rate for most mortgage loans. A sharp increase in the rate drives up mortgage costs and could slow down sales in the housing market.

It’s still very low by historical standards, thanks in large part to the Federal Reserve’s massive bond-buying program. The 10-year Treasury yield hit a recent low of 1.63 percent on May 3. By contrast, it was trading around 4 percent in the summer of 2008, shortly before the worst days of the financial crisis.

This article appeared in print on page 8 of the July 26th, 2013 edition of Hamodia.