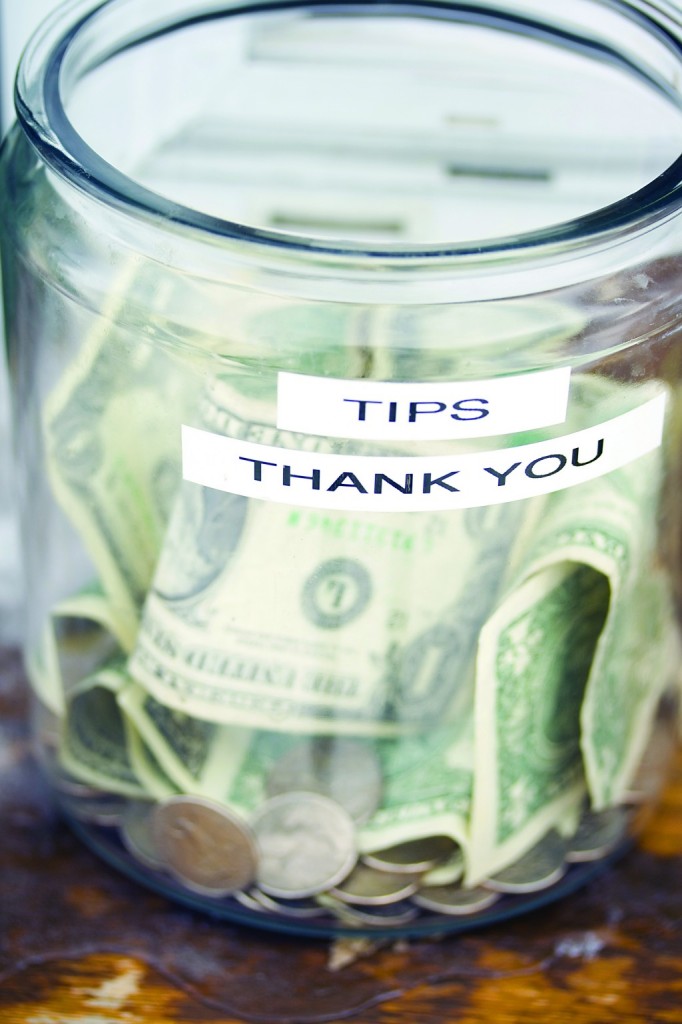 Tipping. Alongside visiting day, marrying your own age and children not accepted into yeshivos, nothing draws as much controversy and water cooler discussion as that 15 percent gratuity added to your bill.

Work as a rebbi, morah, bus driver, counselor, lifeguard or waiter? “How could they not show their appreciation? We work so hard for their son!”

Are you a parent? Heh heh. A tip? He’s just doing his job … (And my son is so cute HE should be paying ME for teaching him …)

Tipping is a great development, with a powerful lobby promoting it. If it were not  here, the rebbeim’s and counselor’s union would have invented it. It pays to change your perspective on it as a burden to an opportunity.

Klal Yisrael are lucky to have rebbeim and moros of the caliber our yeshivos and Beis Yaakovs retain. While nobody is perfect, we are far from the headlines frequently in the secular press about teacher malfeasance. They love and truly care for their charges. Tipping them is not just a small gesture showing that you value their work, it is also (dare I say it) an incentive for them to treat your child better, to allow him to stand out from the other 36 sweeties in the class.

As Harav Avigdor Miller, zt”l, said many times, “the only good bribe is tipping your children’s rebbeim.”

I recall working as a waiter in Camp Karlin Stolin 20 years ago, serving guests who came for the week. Rabbi Perris, then the camp’s administrator, in addition to running the camp, prowling the area at night, managing the government programs and state regulations, took upon himself the added task of reminding/demanding that tips be given.

The ten dollars I got meant all the world to me, a young bachur with an eye on the canteen’s slush machine. Imagine what $100 would do for a rebbi with a mortgage, tuition, simchos and bills, bills, bills. And no one remembers a tip like a rebbi. Camp counselors are known to swap information about tipping habits along with allergy reports, the late-to-bedders, and the best bunk.

While tipping may be costly, it hardly equals the price of a single month’s tuition. Look at it as an additional month — twelve months for the labor, the thirteenth for the pat on the back, the cherry on top.

However, aside from the mentchlichkeit, tipping is the ultimate in Jewish tradition. Along with fundraising dinners and Chinese auctions, we invented the tipping ritual which confounds parents in recent times.

The Medrash includes in the grouping of those whose expenses are not included in the annual allotment, the expenses of “Talmud Torah” — tuition — and of “Rosh Chodesh.” The Rema understands this to refer to tipping rebbeim, which was typically done once a month, on Rosh Chodesh. (How’s that for a dinner conversation topic? $20 a rebbi and morah times six. Add whitefish salad and orange juice for Rosh Chodesh seudah. Discuss.)

(It could be worse. I once watched a hotel executive leaving his building. Two doors were opened for him, plus his car door. Each person who opened the door got a $20 bill. )

So why has tipping come under fire so much in recent years? My theory is that we have become used to yeshivos and Beis Yaakovs assuming responsibility for our children’s chinuch. Why tip for service that’s expected?

In Europe and Eretz Yisrael, tuition is free or negligible compared to the United States. Even in America, where the constitutional separation of church and state is sacrosanct, Blaine amendments stop any funding leaks slipping through, with union cash enforcing a strict interpretation of both. Askanim on the activist and political ends have done a good job at helping reduce the costs of educating our sons and daughters.

In the secular world, many parents recognize that education is a parent’s responsibility. Those families send to expensive private schools, or home school. But in Brooklyn, Lakewood, L.A. and South Bend, areas where most Orthodox Jews live, children attend public school — for free.

This has led to the feeling that it’s the state’s duty to educate children. If they pay for public schooling, and they fund our transportation, textbooks, and afterschool, people may think, they should cover every last expense involved.

While the non-funding of yeshivos is indeed a disparity that screams to be addressed, Jews have always looked at chinuch as a personal responsibility. Which means that while yeshivos and camps are doing their job taking care of your sheifelah, it is up to you to make sure they enjoy doing it.