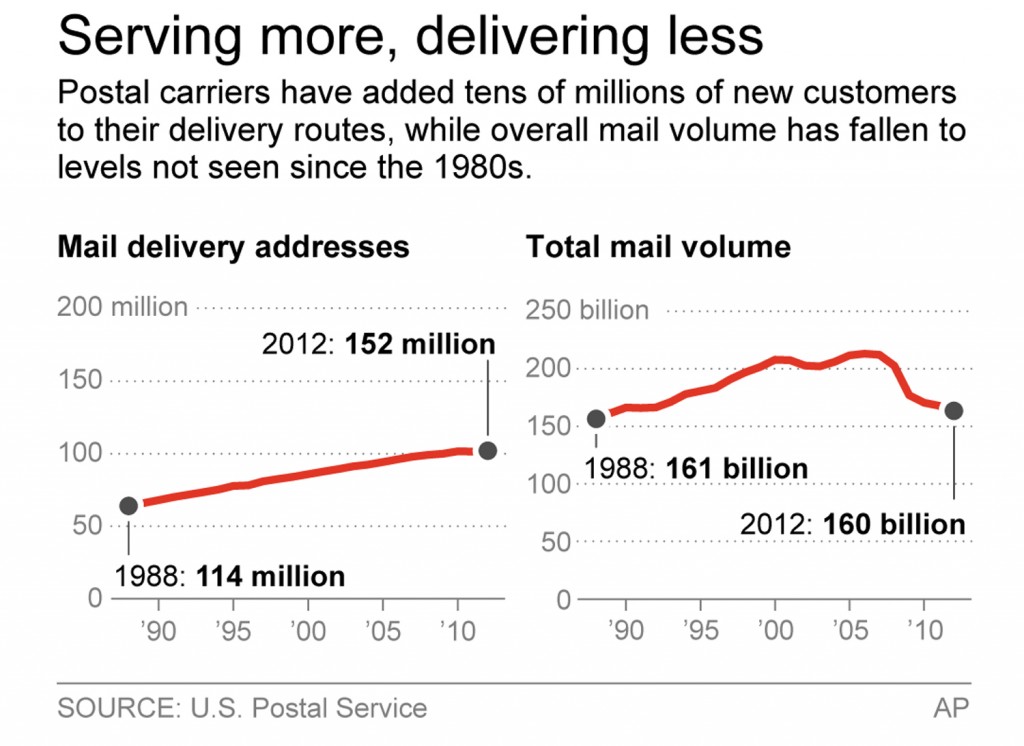 Americans for generations have come to depend on door-to-door mail delivery. It’s about as American as apple pie.

But with the Postal Service facing billions of dollars in annual losses, the delivery service could be virtually phased-out by 2022 under a proposal a House panel was considering Wednesday. Curbside delivery, which includes deliveries to mailboxes at the end of driveways, and cluster box delivery would replace letter carriers slipping mail into front-door boxes.

The proposal is part of broader legislation by Rep. Darrell Issa (R-Calif.), chairman of the House Oversight and Government Reform Committee, designed to cut costs at the cash-strapped agency by up to $4.5 billion a year. The Postal Service had a $16 billion loss last year.

The agency has been moving toward curbside and cluster box delivery in new residential developments since the 1970s. The Postal Service in April began deciding whether to provide curbside or cluster box delivery for people moving into newly built homes, rather than letting the developers decide.

“A balanced approach to saving the Postal Service means allowing USPS to adapt to America’s changing use of mail,” Issa said. “Done right, these reforms can improve the customer experience through a more efficient Postal Service.”

About one in three mail customers has to-their-door delivery, Issa said. The shift would include safe and secure delivery areas, Issa said, especially for elderly customers who receive Social Security checks and prescriptions through the mail.

Sue Brennan, a Postal Service spokeswoman, said, “While converting delivery away from the door to curb or centralized delivery would allow the Postal Service to deliver mail to more addresses in less time, doing so is not included in our five-year plan.”

Brennan said the agency’s five-year plan does call for shifting 20 percent of business address deliveries from door-to-door to curbside and cluster box delivery through 2016.

Rep. Steve Lynch (D-Mass.), said the plan to move some 30 million residential addresses from to-the-door to curbside and cluster box service would be virtually impossible in dense urban areas such as his hometown of South Boston crowded with triple-deckers — three apartments stacked on top of each other.

“You’d have to knock houses down in my neighborhood to build cluster boxes,” Lynch said. “This will not work.”

The financially beleaguered U.S. Postal Service, an independent agency, gets no tax dollars for its day-to-day operations, but is subject to congressional control.