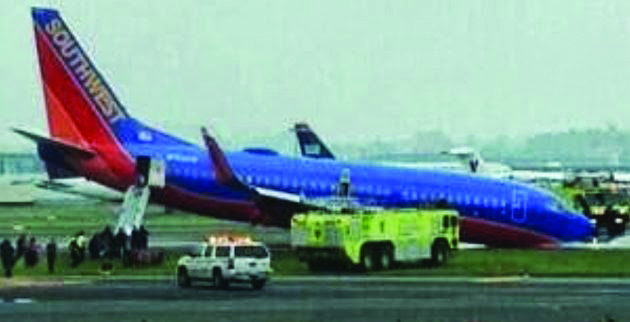 New York City’s LaGuardia Airport fully reopened Tuesday, a day after the collapse of a plane’s front landing gear sent it skidding along the tarmac and temporarily closed the airport.

The nose gear of Southwest Airlines flight 345 arriving from Nashville, Tenn., collapsed Monday right after the plane touched down on the runway, officials said.

“When we got ready to land, we nosedived,” said a passenger, Sgt. 1st Class Anniebell Hanna of the South Carolina National Guard.

Ten passengers were treated at the scene, and six were taken to a hospital with minor injuries. Thomas Bosco, acting director of aviation for the Port Authority of New York and New Jersey, which oversees the area airports, said there was no advance warning of any possible problem before the landing.

The nose gear of the plane collapsed when it landed at 5:40 p.m., and “the aircraft skidded down the runway on its nose and then veered off and came to rest in the grass area,” Bosco said.

The collapse closed the airport for more than an hour. Both of the airport’s runways were back in use by Tuesday morning, a Port Authority spokesman said, and the plane was being moved to a hangar.

Dallas-based Southwest said 150 people were on the flight, while the Port Authority said the total was 149.

The flight was delayed leaving Nashville. Passengers heard an announcement saying “something was wrong with a tire,” said Hanna, 43. She and some family members were coming to New York for a visit.

When the plane landed, “I hit my head against the seat in front of me,” she said. “I hit hard.”

The nose of the plane was “completely down on the ground,” said Richard Strauss, who was on a nearby plane waiting to take off. “It’s something that I’ve never seen before. It’s bizarre.”

Emergency crews were seen spraying foam toward the front end of the plane on the tarmac.

The Port Authority said the passengers exited the plane by using chutes. Hanna said she was among the first to get off the plane, and could smell something burning when she got down to the tarmac. The passengers were put on a bus and taken to the terminal.

The FAA is investigating, as is the National Transportation Safety Board.

Bobby Abtahi, an attorney trying to catch a flight to Dallas, was watching from the terminal and heard a crowd reacting.

“I heard some people gasp and scream. I looked over and saw sparks flying at the front of the plane,” he said.

Longtime pilot Patrick Smith said landing gear issues are not high on the list of worries for pilots.

“From a pilot’s perspective, this is nearly a non-issue,” he said. “This is far down the list of nightmares for pilots.”