Four representatives from the North London Muslim Jewish Forum had an extremely positive meeting with the Polish Ambassador to the UK, HE Witold Sobkow, at the Polish Embassy in London, on Thursday. The four representatives, who included Rabbi Avrohom Pinter and Rabbi Herschel Gluck, expressed their concern to the ambassador about the recent ban of religious slaughter by the Polish Parliament.

The Ambassador was very sympathetic to the issue and expressed his embarrassment that this had happened in his country. It is particularly unfortunate as the Polish government and many organizations have worked very hard to achieve a high level of reconciliation between the Polish and Jewish communities, which has been largely successful. It should be emphasized that there has been no suggestion that the ban on religious slaughter was motivated by anti-Semitism.

The ambassador said that the government was investigating possible challenges to the vote, particularly the fact that it might be unconstitutional to ban religious slaughter, because of the laws guaranteeing religious rights to minorities. He was cautiously optimistic that it would be possible to rectify the matter either by this means or by others, within a reasonable period of time.

The Polish government intends to handle the issue of religious slaughter in two stages. The first stage is to enable religious slaughter to take place for local consumption. There are an estimated 30,000 Muslims and 10,000 Jews in Poland, all of whom rely on local slaughter for their supply of kosher or halal meat, in order to avoid expensive imports. 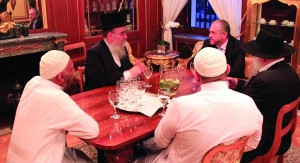 The second stage, which is important to the Polish economy, job market and agricultural industry, is to allow religious slaughter for export. Approximately 6000 people in Poland are directly employed in the area of religious slaughter, and many farmers protested outside the Polish Parliament before and during the vote.

Polish Prime Minister Donald Tusk has given his consent to the formation of a special committee to investigate possible solutions to this issue. The committee will be led by the Minister of Administration and Digitization, Mr. Michal Jan Boni, who also has responsibility for religious affairs in Poland. It will include Chief Rabbi of Poland Michael Schudrich, President of the Jewish Communities of Poland Mr Piotr Kadlcik, and two representatives of the Muslim community in Poland.

There is a concern that the ban on shechitah in Poland will have an impact on kosher meat supplies in other countries, including the UK. Much of the kosher meat in Britain is imported and a substantial amount of it comes from Poland. Since the horsemeat scandal in the UK, the non-kosher market, in particular supermarkets, has placed a greater emphasis on being able to trace their meat to local sources, which has placed a strain on the kosher meat supply nationally, forcing it to rely more on imports.