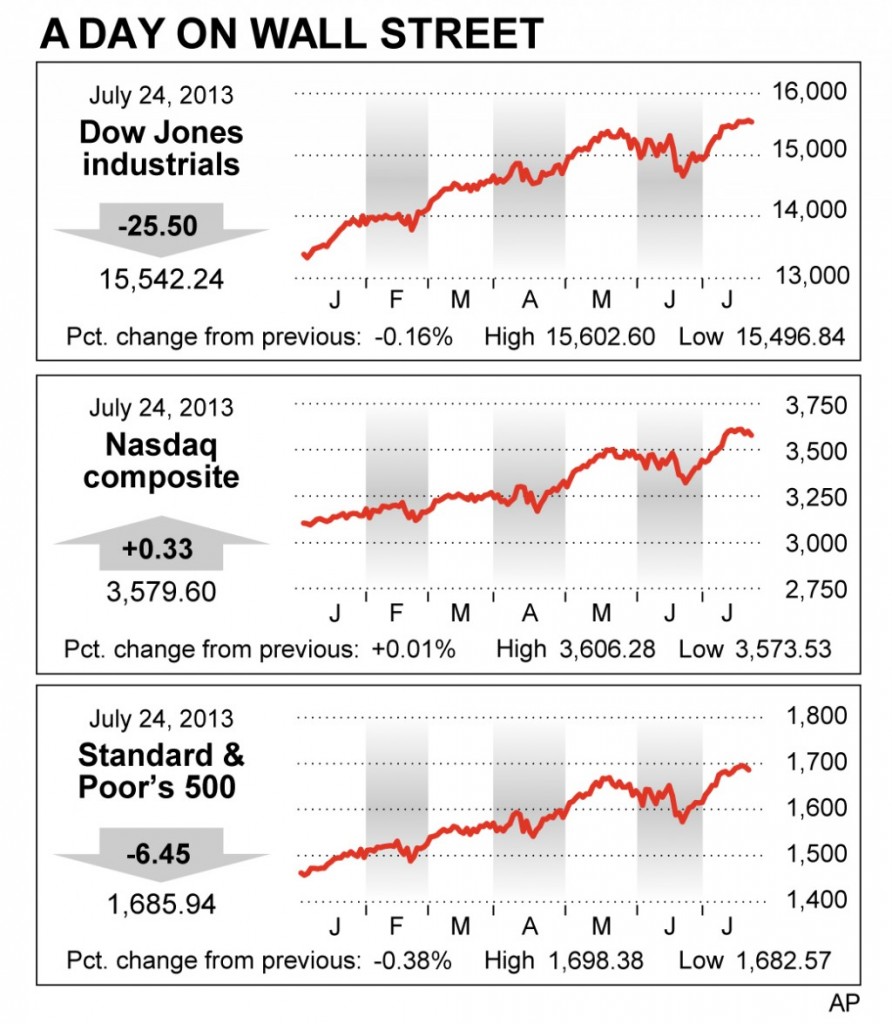 Caterpillar’s earnings fell 43 percent in the second quarter as China’s economy slowed and commodity prices sank. The company also warned of slowing revenue and profit, and its stock dropped $2.08, or 2 percent, to $83.44.

Slight losses spread across a wide variety of companies, with nine of 10 industry groups in the Standard & Poor’s 500 index ending lower.

The holdouts were technology companies, which got a lift from Apple’s surging stock. Despite reporting lower quarterly earnings Tuesday, the maker of tablets, smartphones and computers still managed to beat analysts’ estimates, thanks to rising shipments of iPhones. Apple jumped $21.52, or 5 percent, to $440.51.

Although far from a blockbuster earnings season, the larger trend for corporate profits looks good. Analysts forecast that second-quarter earnings for companies in the S&P 500 increased 4.2 percent over the same period last year, according to S&P Capital IQ. At the start of the month, they were looking for earnings to rise 2.8 percent. More than six out of every 10 companies have surpassed Wall Street’s profit targets.

Financial firms, such as Goldman Sachs and Capital One, have posted the highest rate of earnings growth of any industry. Pull their results out of the total, however, and earnings are on track to slump 3.5 percent, according to FactSet.

Another 25 big companies, including Visa and Qualcomm, released reports after the closing bell. Among them, Facebook surged 14 percent to $30.31 in after-hours trading after reporting income and revenue that easily beat estimates.

Surging demand for pickup trucks in the U.S. helped Ford Motor post higher quarterly profits. Sales in China also jumped 47 percent in the first six months of the year. The second-largest car company in the U.S. raised its profit forecast and its stock climbed 43 cents, or 3 percent, to $17.37.

AT&T dropped 41 cents, or 1 percent, to $35.40. Higher costs hit AT&T’s profits in the latest quarter. The company’s coffers were drained by smartphone sales, which it subsidizes in the hope of making money back over the life of two-year contracts.

In Europe, a broad gauge of economic activity reached the highest level since January 2012, sending stock markets in Germany and France higher. Financial information company Markit said Wednesday that its monthly purchasing managers’ index for the countries that use the euro currency increased for the fourth month running.

The report out of Europe pushed prices for U.S. government bonds down and their yields up. The yield on the 10-year Treasury note rose to 2.58 percent from 2.51 percent late Tuesday.

Signs of economic strength usually lead traders to sell Treasurys, considered one of the safest places in the world to park cash.

The S&P 500 has gained 4.9 percent in July following a rough June. Speculation over when the Federal Reserve will begin pulling back on its bond-buying program rattled financial markets last month.