K.D. Bullock had been retired from the Detroit Police Department for nearly 17 years and was working as a casino security supervisor when he encountered a problem last March -long accustomed to working on his feet, he suddenly couldn’t make it up a flight of stairs. After months of doctor’s appointments, he was diagnosed with rheumatoid arthritis, which makes it difficult for him to breathe. He not only left his job but had to begin paying others for the fix-up work he’d been doing on his historic six-bedroom house.

Now, he could be facing another hit, this time to his $2,400-a-month pension.

The pensions earned by more than 21,000 retired municipal employees have been placed on the table as Detroit enters bankruptcy proceedings with debts that could amount to $20 billion. Labor unions insist the $3.5 billion in pension benefits are protected by state law, but the city’s emergency manager has included them among the $11 billion in unsecured debt that can be whittled down through bankruptcy. A federal judge has scheduled the first hearing on the city’s case for Wednesday.

The prospect of sharply reduced pension checks has sent a jolt through retired workers who always counted on their pensions-who sometimes sought promotions just to sweeten the pot-and never imagined they could be in danger even as the city’s worsening finances finally led to its bankruptcy filing last week.

Bullock says he’s worried he’ll have to sell his home in Detroit’s historic Indian Village neighborhood, and others are wondering if they can afford a house at all.

“A number of things can happen. It just means our lifestyle is going to change — we have no way of knowing,” Bullock said of the choices facing him and his wife, Randye.

Bullock, 70, said the idea that his pension could be reduced is “a hard pill to swallow” after 27 years on the force working his way up. He said he was proud to be the first black commanding officer of the department’s communications system.

He said that pensions — and people — should be a priority over other city assets, such as artwork at the Detroit Institute of Arts, some of which could be sold to help satisfy the city’s staggering debts. But art patrons have protested the idea of auctioning off Old Masters in the museum collection. And investment funds have spoken up for the average people who could get only cents on the dollar for their investments in supposedly safe city bonds. 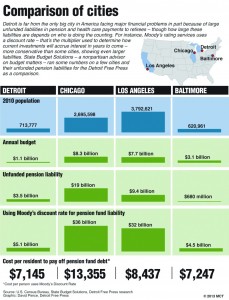 The ripple effects of the pension issue are touching people far beyond Detroit.

Glenda Dehn, 66, and her husband planned to spend winters in Arizona after his retirement from the police force, but since their recent divorce after 48 years of marriage, the home in Peoria, Ariz., is her permanent residence. Now she worries that she’ll have to move in with family members in Michigan.

“It would be a major life change for me and many, many others,” said Dehn, who also has a son on the force.

Likewise, police retiree Warren Coleman, 76, wonders if his other investments will be enough to support him. In his 27 years on the job before he retired as an executive lieutenant and moved to Ocala, Fla., he said he “put a whole lot of effort into getting promoted” with the rising retirement benefit in mind.

“I intended … to do the best I could while I was there and get me in as nice a position as I could,” he said.

Not knowing what’s going to happen to ensions — especially after paying into them and planning retirement around them — is the biggest concern for retirees right now, said Rose Roots, a 30-year city employee who retired in 1997 as a job-training specialist. She’s also the president of a retiree chapter of the American Federation of State, County and Municipal Employees. People want advice, she said, but there is little she can say.

“I’ve had some older retirees call me on the phone in tears because of their medical needs,” said Roots, 76. “I’ve never received calls like the calls I get now.”

Roots said her pension payment is “well below” the $19,000 annual average for municipal employees. “At this point, I can’t even guess at what may happen that may force me to make changes,” she said.

Retirees are putting their hopes in state lawsuits filed by the pension funds. They argue that pensions are protected by the Michigan Constitution and should not be part of the bankruptcy process. The bankruptcy judge will likely rule on whether federal bankruptcy law supersedes the state guarantee.

The impact of the decision could fall heavily on retirees who had low-paying jobs and got small benefits checks.

Michael Woodson began receiving a disability pension of less than $500 a month after he said he fell off a truck while working for the sanitation department. The 57-year-old, who uses a walker, lives in a rugged neighborhood “in the heart of Detroit.”

“My concern is just (living) every day,” he said. “I’ve been a blue-collar worker or less all my life. You learn to struggle.”

This article appeared in print on page 12 of the July 24th, 2013 edition of Hamodia.