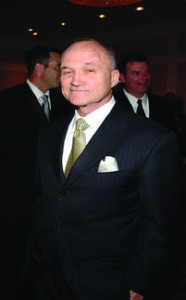 A week after a top Senate Democrat wrote to President Barack Obama to consider Raymond Kelly to oversee one of the largest federal security agencies, the New York police commissioner penned an op-ed defending controversial police tactics that insiders say is the greatest impediment the president has to hiring him.

Obama’s only public reaction to the suggestion was that he was interested to hear if Kelly would consider leading the third-largest department in the government, a combo of 22 different agencies with more than 180,000 employees located in every state and many foreign countries.

“Mr. Kelly might be very happy where he is, but if he’s not I’d want to know about it, because obviously he’d be very well qualified for the [Homeland Security] job,” Obama told a Spanish language media station.

Talking on Tuesday to MSNBC’s “Morning Joe” program hours before Mayor Michael Bloomberg vetoed two council bills making it easier for minorities stopped and frisked to sue for racial profiling and another establishing an inspector general over the NYPD, Kelly defended the tactics.

But some insiders say that the tactics, which statistics show affect roughly the same percentage of the population which are affected by crime, may stop Obama from nominating Kelly.

“After the Trayvon Martin case, this is quite a challenge,” one administration insider told the New York Post. “There would be head winds from the African-American community. The civil-rights community would have issues with it.”

“The reputation that proceeds him on the stop-and-frisk question has raised some doubts,” said Rep. Alcee Hastings (D-Fla.), a member of the Congressional Black Caucus. “He can’t stop-and-frisk everyone in the world.”

Even supporters agreed he was a long shot.

However, Rep. Carolyn Maloney, a Democrat from New York, wrote ten reasons that Kelly would be best for the job, including that he has the necessary legal, military and leadership background.

The clincher, Maloney said, was that he has a perfect record when it comes to fighting terrorism.

“There have been 16 known terrorist plots against New York City since Sept. 11, 2001, including planned attacks on the Brooklyn Bridge, the NYC subways, Herald Square and JFK Airport,” she wrote for the Daily News. “All were detected, intercepted and defeated. And the would-be perpetrators are now behind bars.”

Kelly, who friends say is “interested” in the job following 12 years leading the nation’s largest police force, penned his own op-ed in the Wall Street Journal Tuesday defending his tenure.

“In the 11 years before Mayor Michael Bloomberg took office, there were 13,212 murders in New York City,” Kelly wrote. “During the 11 years of his administration, there have been 5,849. That’s 7,383 lives saved — and if history is a guide, they are largely the lives of young men of color.”

Kelly said that 2013 is shaping up for a 50-year low in murder rates, with much of it credited to gun control and stop-and-frisk.

Kelly outlined the legal support police use in stopping certain people, and statistics backing his claim that the vast majority of those saved by the tactics are blacks and Hispanics.

“As a city, we have to face the reality that New York’s minority communities experience a disproportionate share of violent crime,” he wrote. “To ignore that fact, as our critics would have us do, would be a form of discrimination in itself.”

This article appeared in print on page 1 of the July 25th, 2013 edition of Hamodia.