Israel An Historic Day in the Knesset
Israel 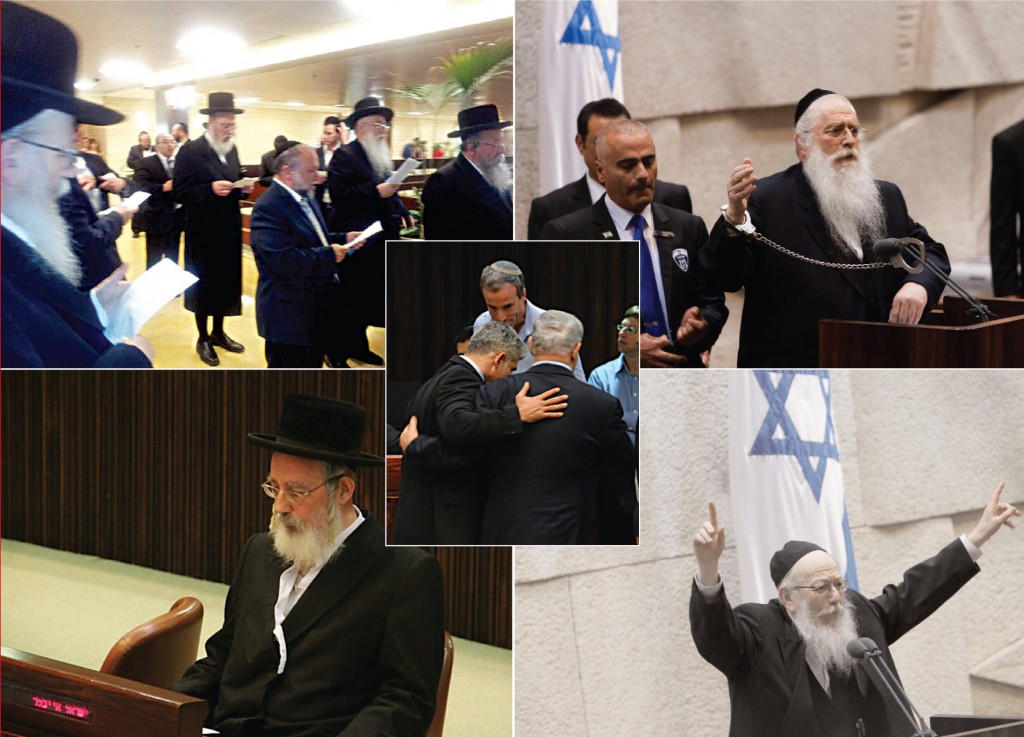 A draconian law that intends to forcibly draft yeshivah bachurim with the stated intent of harming the way of life of the chareidi community has passed its first reading in the Knesset. At dawn on Tuesday morning, 64 MKs voted in favor of the law initiated by the Yesh Atid party; only 21 voted against it. Thus, the Knesset has made a shameful decision to deliberately cause a rift in the nation and to harm the Torah and those who study it. In an unprecedented move, the seven UTJ MKs rose one by one and tore kriah in their clothes, as mourners do when grieving over the offense to a sefer Torah.

Among the supporters of the law, dubiously named “Sharing the Burden,” were Prime Minister Binyamin Netanyahu, and the members of Jewish Home, headed by Naftali Bennett, who all voted in favor. Among them were MKs Eli Ben Dahan, Zevulun Kalfa, Avi Wartzman and Orit Struk, who claim to identify more with the chareidi community ideologically. As the sun began to rise, their masks were torn away and their hypocrisy was revealed to all. This is a party that has borne the banner of destroying the Torah world, and on Monday night, it became apparent to all.

Earlier, as reported yesterday, when Minister Yaakov Perry, the chairman of the ministerial committee that prepared the law, got up to present it to the plenum, the chareidi MKs from UTJ and Shas and their aides went into the corridor, where they held an atzeres tefillah, reciting Tehillim and Selichos and blowing the shofar.

MK Rabbi Meir Porush chained himself with handcuffs to the microphones at the Knesset lectern, and emphasized over and over again before the stunned MKs: “The yeshivah students will agree to go to jail in handcuffs, but you cannot tear them away from their learning — and it is that community that I represent as I stand here to show you how it will look. Yeshivah students will continue to learn even if they are handcuffed.”

Knesset Chairman Yuli Edelstein angrily declared that he would complain against Rabbi Porush in the Knesset Ethics Committee. Concurrently, he also warned MKs Litzman and Gafni, “Shame on you. If you plan to repeat this, you will not be speaking in the plenum for a long time to come.”

It took the Knesset ushers a long time to release MK Porush from his handcuffs, and technicians had to dismantle the microphones in order to do so. The Chairman removed MK Porush from the plenum and only allowed him back to vote. Towards five in the morning, a black day dawned in the State of Israel as 64 MKs, among them those wearing yarmulkes, voted to throw Jews into jail for the “sin” of wanting to sit and learn Torah. After that, the Civil Service for Yeshivah Students Law was brought for a vote; 66 MKs voted for it and 29 voted against.

Despite persistent demands from Finance Minister Yair Lapid’s Yesh Atid party to accelerate the process so that a final vote could be taken before the summer recess, Knesset Legal Adviser Eyal Yinon said that second and third readings of the bill could not be accomplished until the winter session, in about four months.