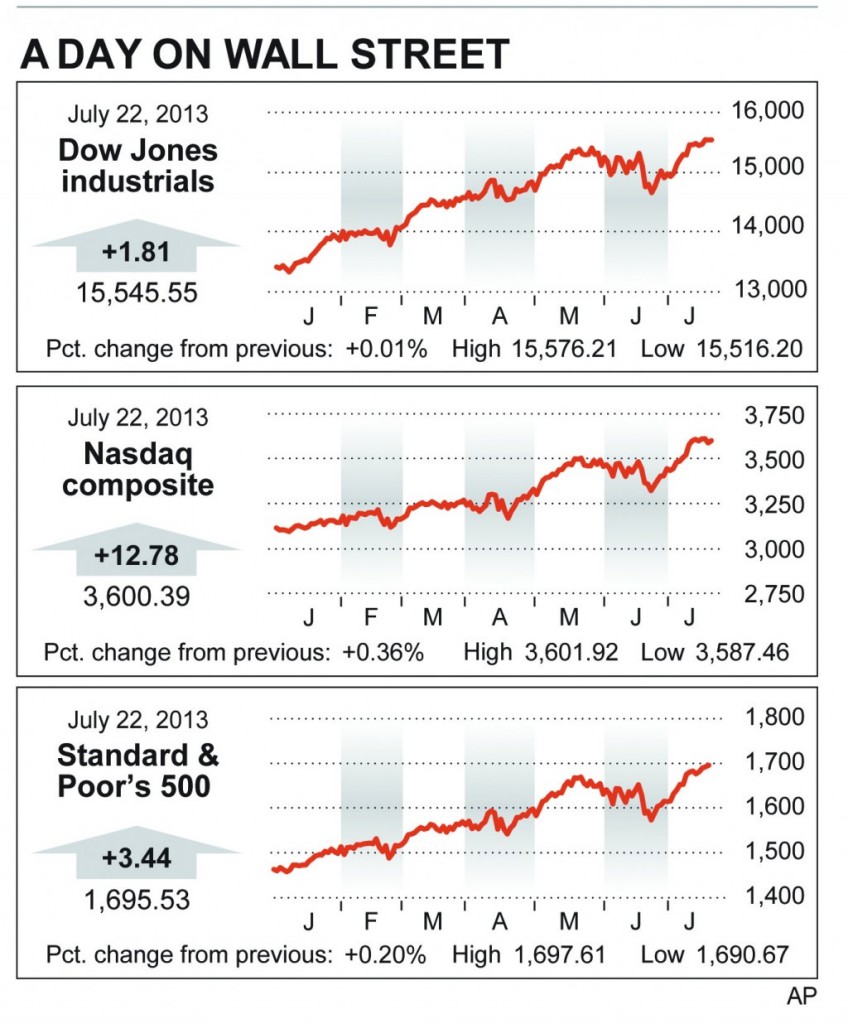 Poor second-quarter results from a handful of large U.S. companies weighed on stocks. McDonald’s fell after it reported lower global sales and warned of a tough year ahead. Media company Gannett dropped after its revenues fell short of financial analysts’ expectations.

But gold and copper prices boosted mining companies, and that helped nudge the market to another all-time high.

Investors are looking ahead at a busy week of corporate earnings. More than 150 companies in the Standard & Poor’s 500 stock index are reporting quarterly earnings over the next four days.

For the most part, corporations have reported results that have beaten analysts’ expectations, though there have been some big letdowns. On Friday, Microsoft plunged after it reported declining revenue and a big write-off on its new tablet computer. Coca-Cola slumped last Tuesday after the company said it sold less soda in North America.

“Earnings are not stellar,” said Brad Reynolds, chief investment officer at investment adviser LJPR. “It just seems that the market is okay with that.”

Investors were more than okay with gold Monday. Its price climbed above $1,300 for first time in a month, giving mining stocks a big lift.

Gold had plunged earlier in the year because investors thought the Federal Reserve was close to ending its economic stimulus. Gold is now advancing on speculation that the Fed could continue the stimulus for longer than previously thought. That increases the chance of higher inflation and weakens the dollar. When the dollar falls, gold becomes more attractive as an alternative investment.

Five of the 10 industry group in the S&P 500 rose. Gains were led by financial companies, which have posted some of the strongest earning reports for the quarter so far, and are expected to report average earnings growth of 23 percent for the period. Bank of America added 17 cents, or 1.2 percent, to $14.92.

One sector that struggled was homebuilders. Sales of previously occupied homes slipped in June to an annual rate of 5.08 million, the National Association of Realtors said Monday.

In government bond trading, the yield on the 10-year Treasury note was unchanged from Friday at 2.48 percent. As recently as July 5, the yield was as high as 2.74 percent.

As of Monday, 63 percent of the companies that have reported earnings have exceeded expectations. That’s above the historical average.

S&P 500 companies are forecast to report earnings growth of 3.6 percent for the second quarter compared with a year earlier, according to data from S&P Capital IQ.

Among other stocks making big moves.