A strong earthquake that shook an arid, hilly farming area in northwest China sparked landslides and destroyed or damaged thousands of brick-and-mud homes Monday, killing at least 75 and injuring more than 400, the government said.

The was quake near the city of Dingxi in Gansu province. It toppled walls, shattered houses and sent cascades of dirt and rock down hillsides that blocked roads and slowed rescue efforts.

Hospitals set up aid stations in parking lots, while hundreds of paramilitary People’s Armed Police fanned out to search for victims in the region, about 760 miles west of Beijing.

“I saw the bulb hanging from the ceiling start swinging wildly around. I woke my two friends and we ran into the bathroom to hide,” said arts student Li Jingui, 21, who was on the fourth floor of a school dormitory in Dingxi when the shaking started.

“After the strongest tremors were over, we were worried that there would be aftershocks, so we packed our stuff and ran out into a large clearing,” Li said in a telephone interview.

In addition to the 75 confirmed dead, there were 14 people missing and 459 injured, the central government’s China Earthquake Administration said. 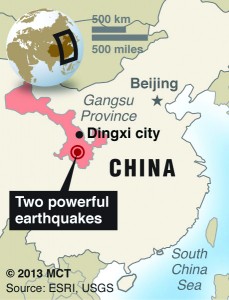 Damage was worst in Dingxi’s rural southern portion, where scores of homes were damaged and telephone and electricity services knocked out, Dingxi Mayor Tang Xiaoming told state media. All but three of the deaths, all the missing and most of the injured were there, a likely result of shoddy construction.

Residents said the shaking lasted about one minute, but wasn’t strong enough to cause major damage in urban areas, where buildings are more solidly built.

Heavy rain is expected in the area later in the week, raising the need for shelter and increasing the chance of further landslides.

This article appeared in print on page 2 of the July 23rd, 2013 edition of Hamodia.